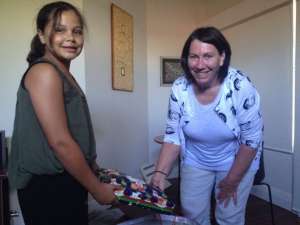 Senator Sue Lines and grand-daughter Charlee made sure one family did not go without.

There is a profoundly long way to go in bridging classist divides, poverty, in ending the juxtaposition of affluence nearby grinding poverty. Nearly two and a half million Australians live below the Henderson Poverty Line. One million Australian children live below that line. Nearly 20,000 children aged 12 years and less are homeless. But hey, somehow this does not get the extensive coverage it should. Australia is the world’s 12th largest economy and our parliaments and media are pretty much obsessed with the big end of town.

However there are salt of the earth social justice advocates, right-minded individuals who knock themselves out in working for no financial reward to spread the love. They are in every town, in every city doing what they can to spread that love to those who generally go without, to those with greater needs. Their work indicts our governments, our major institutions who by comparison do ever so little for those in need.

Of course some people will disagree with me but I disagree with those who suggest our governments and major institutions do their bit, that they do enough. They do not.

The principal editor of this news site, Jennifer Kaeshagen, was inundated this Christmas with requests from many struggling families. Families unable to afford Christmas tucker, gifts. She was also inundated from homeless families. What did Jennifer do? She galvanised community. We spent part of Christmas day in a city park with many homeless, with meals for all present. I must add that it was where I felt we should be, with those in greatest need.

Jennifer put the word around about a homeless family of 13 children that asked for 13 blankets. Blankets were no problem. Thanks to the goodwill of Australian Senator Sue Lines there were presents for each of the children. Sue and her granddaughter, Charlee spent the day shopping for the gifts. Thank you. Gifts and essentials were also provided for families by the family of Amanda Winmar. Jennifer’s car was filled to the hilt with groceries thanks to the generosity of the Winmars. Homeless advocate Janette Henry also filled Jennifer’s car with essentials, care packages and other goods for struggling and homeless families. Thank you. Special mention needs to go to a former refugee, Riyadh Al-Hakimi who gives the shirt off his back again and again. His donations have ensured food on the table of many families.

Thank you to all the kind hearted people who donated through Jennifer to assist as many individuals and families as possible. The big end of town ensures we know what ‘good’ they do. You know, 85 families ‘own’ more than half of the world’s wealth. More damage is done than good. It is important that those who proportionally give more, who do no damage to society, are heralded, because their way is the only way forward.

Doing as much as one can is a lesson governments and the big end of town need to learn, understand and practice.  Our days on this earth should not be misspent. It does matter what we do.