Taboo, stigma and shame need to get out of the way for suicide prevention 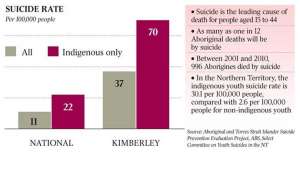 Stigma comes in a number of ways – most destructively as shame; and reduces contact between support people and the vulnerable individual. But another form of stigma is the stigma where for instance suicide is seen as normal – normalised – accepted as matter of fact in some communities as inevitable and inherently as a ‘solution’ to crisis and adversity, or in the very least as circumstantially unavoidable. People need people – foremost we must work to this most obvious premise. Suicide, as common as it is as a leading cause of violent death, can never and should never be allowed to be perceived as an ‘acceptable’ response to crisis and adversity.

In many communities where the descendants of the First Peoples of this continent have been marginalised and isolated in impoverishment and various identity crises, indeed suicide as a response to crisis and adversity is viewed by many as ‘normalised’. In my travels throughout this continent, from community to community, far too many have said, “suicide takes our young” as if it is unavoidable. Whole communities have premature, unnatural deaths and suicides as part of everyday living – “it is our lot in this life”. “We suffer for what was done to us by the oppressor.” This form of stigma has a volatile contagion effect, where a people’s whole identity is infected by layers of implicit self-blame, implicit questions about their worth, explicit views that their identity carries liability.

This is a perniciously endemic problem not resigned to Australia’s First Peoples alone but a catastrophe globally among the descendants of First Peoples in middle to high income nations with colonial oppressor histories. From the shanty towns of the Australian continent, to the Amazonian basin to the Lakota reserves, the descendants of the First Peoples live as minorities discriminated against on a daily basis. This type of stigma has a systematically destructive effect on the descendants of First Peoples. The only way out for far too many of them is to effectively deny their historical identities and ‘assimilate’ singularly with the ‘oppressor’. This often means a disconnection with many of their own immediate relatives who maintain high cultural content levels, who resist assimilation. Not only do we have a clash of two cultural settings in middle and high income nations with colonial oppressor histories but we also have an intra-cultural clash of those who fight “tall and proud” to retain their right to their historical identity with those among them who decide to put it behind them. These divides – the clash of two cultural settings and the intra-cultural divisions are both hurtful experiences, and have direct influence on identity crises – culminating for far too many in depressions, self-harms and suicidal behaviour. It appears to far too many who desire the natural right to unfold their way through the various settings, to determine who they are and how they want to live, to be free of judgments that lead to the cruelties of racism, prejudices, biases against them – that the oppressor is always winning.

Much is suggested about ‘responsible’ media reporting. There is an argument for the media to not ‘sensationalise’, ‘glorify’ suicide and to be careful about the reporting in regards to ‘copycat suicides’. There is pressure on the media to not report by what means suicides occurred – whether by hanging, poisoning, firearm, etc. There is obvious merit in all this but the media is vitally important, and thus far has been underutilised, in suicide prevention. It is more important to reduce the will to suicide than to worry about the means someone facilitates suicide. We need sustained discussions in understanding suicidal behaviour – especially with causality – if we are to reduce the leading cause of violent deaths in our world. Only the social reach of the media can adequately achieve this.

The media needs to publish disaggregated statistics on violent deaths – and realise that suicide is the leading cause of violent deaths. This will surprise the majority. Hence, we can culturally shift pressure on our governments to prioritise suicide prevention. These are the most responsible media practices we can have at this time rather than the current focus to minimise facts about what is occurring.

The media is the most powerful tool capable of raising awareness about mental health, substance abuse disorders and of suicide. We have to move away from the thus far portrayed stigma of suicidal behaviours and of suicide and instead understand causality, more so than obsess with impacts. We need to reduce blame and aspersion. If we do this then we work our way to humaneness, humanity and move away from isolationist attitudes and excessive self-interest responses. Taboos and stigma fork to inhumanity. There is no greater legacy we can have than to help one another. In doing this we bond people with humanity, rather than the inhumanity we endure by isolation, disengagement and various inherent blame – we  have to do away with reductionist arguments of self-responsibility. The dumping on troubled and damaged people the self-responsibility mantras work only to isolate people and heighten depression, self-harm and suicide risk factors. It is up to all of us – to associate it, not to dissociate. The ultimately ‘up to them’ attitude is volatilely dangerous. People do not function as individual units but function with and alongside each other. This is social cohesion. Patience and love are above all else.

We need to understand the cause of suicide risk factors, because they do not exist fundamentally across cultures or throughout history. We have to compare and understand why life stresses in one cultural setting can culminate in high rates of depressions, self-harms and suicidal behaviours but in other cultural settings these same life stresses do not lead to any risk factors predisposing depressions, self-harms an suicidal behaviours.

We need to understand why the world’s descendants of First Peoples in nations with colonial oppressor histories are being hit with the world’s highest rates of depressions, self-harms and suicidal behaviour. We have to understand this tragic phenomena in terms of interrelationships with the ‘oppressor’ impost, within the proposition of discrimination, within the understanding that the descendants of many of the world’s First Peoples in nations with colonial oppressor histories have been transformed to minorities – hence enduring ‘voicelessness’, ‘diminution’, ‘mobbing’ and in enduring psychosocial, psychological and emotional beatings and abuse that have made their historical and contemporary identities a liability – racialised. As long as racism is played down then discrimination is fuelled. Whenever this occurs, the abuses increase – emotional stresses and trauma trigger culminations such as depressions and suicidal behaviour.

We have to break the isolation that far too many endure, we have to reconnect people, and though this can be done over time at the coalface – community by community – the media can play the most powerful hand of all.