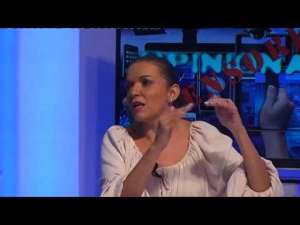 In the interests of proper disclosure it must be said that I am a big fan of Dr Anne Aly and I have been a friend of hers for the better part of 20+ years. And I was also grateful for the receipt of Anne’s book, Finding My Place, just prior to the time that I was part of a function that “roasted” Anne. My co-roasters on that night were Alannah MacTiernan and Wayne Swan (both heavily involved in the Labor Party in this country). I mention their presence as an indication of the esteem with which Anne is regarded in political circles.

When I first knew Anne, she was a visitor to the Ethnic Communities Council of WA. She was an employee at the Office of Multicultural Interests. Her role was that of a Policy Officer. Unfortunately for her she came up against two of us who have a finely developed sense of human rights and fairness and a sense that we express our views in no uncertain terms. As was customary at that time, visitors to the ECCWA left, often dabbing at their eyes with tissues as they bawled their hearts out at the unfairness and bluntness of our expression.

Importantly, Anne did not allow this first experience to colour and skew her perceptions of us. We continued to interact in this space and became allies and friends. She would often help me out when I need someone of Islamic faith to assist me with training programmes that I conducted with government departments in WA.

Whilst I knew lots about Anne and her career post OMI and at the time she was a research fellow at Edith Cowan University, it is probably fair to say that my knowledge of her earlier life was patchy at best. So I tackled this book with enthusiasm and started to read it on a Friday night. By Saturday afternoon I had worked my way through the entire book. That gave me lots of material for the “Roast” but it also gave me an insight into the background of this girl that went to form the spine of incredible resilience that she has.

Her story is one of difficulty. It is also a story of hope and fight from a person who I have come to love for all the reasons I am an advocate for Multiculturalism and Integration into Australian society. One part of the story that I was not aware of is that behind the strength and public bravado that Anne displays is a personality that hurts when she is confronted and vilified. The scene at the Café when she bought herself a coffee, soon after the September 11th attacks, and the vitriol directed at her because of the fact that she was of Islamic faith are so well relayed in the book. The hurt that she felt, the anger she had but also the sheer futility that she felt at trying to deal with the issue without publicly blurting out her anger. Going back to the office and crying at the hurt she felt was graphically conveyed. And in my humble opinion was the formative seed of an idea that would see Anne end up being the first Australian Muslim Woman in Federal Parliament in Australia, And I would like to be present at the café when she goes back now to have a coffee there and remind the offender of his derision foisted on her!

It is without question that her background has formed her spirit and toughness. The failed violent domestic relationships, the fractious and fractured relationship with her brother, the cultural and emotional strictures placed on many of us by our upbringing have all contributed to the making of Dr Anne Aly. They created a person who became Australia’s foremost authority on terrorism issues. And in a field of study and practice that is so incredibly gender and ethnically biased that makes her success even more remarkable. And her status in that field was confirmed by her meeting with President Obama at the White House.

There are a few constants in Anne’s life. The most important ones of those are her sons, Adam and Karim. I have known Adam some years but have not had the pleasure of meeting Karim. Anne was an archetypal “Helicopter” Mum. She was protective of the kids not only from the parent figures in their lives but from the world at large. Some of the things she did to survive as a single parent with two boys are conveyed in the book, not as a means of gloating but simply as a means by which others may take heart and forge a path for themselves.

In the last few chapters of her book, another constant arrives in the form of one Dave Allen. The story of Dave talking to Anne’s Mum about his “intentions” towards Anne, reminded me of how much our so divergent cultures actually have so much in common. Everything that she wrote about her Mum could have been written about my Mum. But, Dave’s handling of Mum was highly amusing. However, what is readily apparent in Anne’s description of her life with Dave and in Federal Parliament is the grounding that he provides. Dave is there, whenever, she turns and whenever she may stumble.

Anne’s book is a beautifully told narrative. It is an easy read and one that I would recommend very highly to many cohorts of people. Students at schools reading it will learn what hard work, resilience, bouncing off a canvas every time you got decked, developing a hide (publicly, anyway)and having a commitment to succeed are all about. Young Muslim girls will learn all of those things but also develop a commitment to their own religion. People from an ethnic minority will learn how to deal with detractors and any would be politicians will learn to deal with any type of adversity.