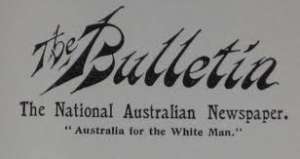 Many of us who are reading this article would not know of the finer detail of the White Australia policy. Let me tell you what it says in Wikipedia (in part):

“Soon after Australia became a federation, it passed the Immigration Restriction Act of 1901. The passage of this bill is considered the commencement of the White Australia Policy as Australian government policy. Subsequent acts further strengthened the policy up to the start of the Second World War. These policies effectively allowed for British migrants to be preferred over all others through the first four decades of the 20th century. During the Second World War, Prime Minister John Curtin reinforced the policy, saying “This country shall remain forever the home of the descendants of those people who came here in peace in order to establish in the South Seas an outpost of the British race.”

The way the government achieved their desire to keep this a place primarily for English and United Kingdom migrants was to institute a English comprehension and spoken test. Therefore if English was not your native language you would most likely fail and would be denied entry into this country.

But the White Australia policy is no longer in application, surely? Yes that is true but there is a very real desire on the part of our Immigration and Border Protection Minister, Peter Dutton to reintroduce exactly this. How is he going to do this?

I was alerted to this by the Shadow Minister Tony Burke. Mr. Burke was speaking at the FECCA conference in Darwin from where I write this article. In his speech Mr. Burke referred us to the changes that have been contemplated to the Citizenship test requirements. The main changes are as follows:

·         Making the waiting period 4 years to qualify for citizenship

·         Asking applicants for citizenship to commit to “Australian” values

It is that last item above that is concerning Burke and the Labor party. What are the issues?

Burke’s contention is that this requirement of an IELTS band score of 6 is what is required for an academic visa in Australia. This contention by Burke and the Labor party was recently “Fact Checked” to determine its accuracy. Details are here: http://www.abc.net.au/news/factcheck/2017-06-28/tony-burke-citizenship-test-university-level-english-dutton/8656754.

The most revealing part of this article is contained in the following paragraphs:

“Professor McNamara said Mr Burke was correct in arguing that applicants applying for citizenship would be required to reach “university level”.

He said IELTS was calibrated against the Common European Framework for Reference for Languages (CEFR). This is an established guideline used to describe achievements of foreign language learners in Europe and elsewhere.

Interestingly, the language proficiency levels required for citizenship in European countries are equivalent to IELTS bands four to five. This means Australia’s requirement for citizenship would be higher than any other country in Europe, including Britain.

“It is very likely that Australia has the most stringent language testing for citizenship anywhere in the world,” said Professor McNamara, who is researching the use of language tests in immigration and citizenship contexts.”

So that confirms that the IELTS test results in Australia are very much at the top end of what is required in a number of Western countries.

But surely if we are applying this same requirement to all people applying for Citizenship here where is the problem? The problem lies here:

Citizens of the following countries who are applying for Australian citizenship do not have to do the IELTS test:

“Applicants whose first language is English and are a passport holder from Canada, New Zealand, the Republic of Ireland, the United Kingdom or the United States of America.”

Is this any different to the policies of exclusion that we saw applied in the White Australia policy days? Clearly not! Let me also say that I can certainly point to citizens of a number of other countries who would speak, read and write English at a far higher level than some of the citizens of the countries listed above!

So why are we even allowing the Liberal party and Peter Dutton in particular to run this exclusionary and clearly racist policy? This must not be allowed to happen. We can not allow the racist, biased English testing policies of that era to be reintroduced in this country. And it is incumbent on all of us to voice our opinion to the members of Parliament who represent each of us.