Stuff the reports, research – Sam Cook has shown the way, let’s hit the streets to end the racism 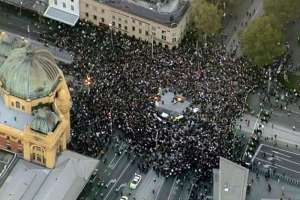 Why are First Peoples of Australia being jailed at these world record horrific rates?

In Western Australia, one quarter of First Peoples in prison have been jailed for fine defaults – poverty related offences. In general, poverty is why they are being jailed – for the inability to pay fines, for stealing, for disorderly behaviour.

In Western Australia, First Peoples comprise less than 3 per cent of the total population but nearly half of the adult prison population. In Western Australia, in general, they are among the nation’s poorest people – living in communities that have been neglected, degraded by one Government after another. They live the highest homeless rates in the nation, matched only by the Northern Territory homeless rates among First Peoples.

Seven per cent of the Kimberley’ total population is homeless – nearly all of this homelessness is of First Peoples. Where else in the world do you get such levels of homelessness, outside of natural disasters and civil strife. The Northern Territory too has a seven per cent  homelessness rate among its First Peoples. But hey who cares? The media does not write about it. I have been the only person in the nation banging on about this.

In the one year in Western Australia, police issued 10,000 move-on notices to First Peoples. The State’s total population of people identifying as First Peoples is 80,000.

The solutions to the ways forward are simple. Improve their mass social health quotients, expeditiously. With the social determinants do the equality bit. It is that simple, indeed most certainly simple – infrastructure, services, self-control of these services, equal opportunity to navigate two cultural settings. Importantly, leave alone their cultural settings – do not introduce policies which in effect impact and reduce their cultural content. It is their business to do what they want to do.

Many of us who know better are exhausted by report after report, research after research. They are immediately redundant because there is little political will to uphold recommendations that have to do with properly acknowledging cultural integrity, freedom, the right to be, the right to manage ones own affairs and to unfold relevant change oneself.

There is little political will, if any, to support anything other than assimilation – which has proven again and again as utterly dangerous and destructive. The statistical narratives prove this.

We must reject all further research and reports – we must reject reductionist policies and the surrender to the demand of assimilation which demand a narrative of generations of people sacrificed to the jails, to the streets, to congested alleyways and condemned squats, to Government made shanty towns and precincts. We need to entrench a deep cultural shift to what is right, to the obvious as matter-of-fact, so that the political will ride the cultural waves and live the making of difference.

Only then will we have that long overdue national conversation on racism – unfettered – and soon enough do away with the thus far hostile denial of this nation’s racism.

We must follow with revolution on the streets, as is being demonstrated by the movement on streets railing against the threat to close Homelands. Nationally, thirty rallies on March 19 grabbed the nation’s attention the fight to save the Homelands. On May 1, 85 rallies nationally and internationally grabbed the nation’s attention – Melbourne on two occasions was brought to a standstill. There has been progress here, cultural shifting. Much the same is needed to end the racialised jailing, the disproportionate burden of homelessness on First Peoples, to stop Governments degrading Homelands into third world akin existences, into shanty towns.

Reports, research will not achieve anything. It is now a sick joke every time someone applauds the latest report and that somehow it will underpin progress. Do I have to restate the statistical narratives? I am a researcher, and I have long dumped the onus on reports and research and go hard on the campaigns and the lobbying – and have got what change one person or a small group of people are capable of by doing this, and every time I have done this it is always more change – real change – than any report will deliver.

There is an industry of researchers and report builders and our numbers are so huge that we should have changed the world. But we have not. This is why I dump the reports to one pile, reduce the research to nutshells and join the public campaigns, and focus in the behind-the-scenes lobbying because change, real change, will come no way else.

I could have a long list of titles, awards, fellowships by now if I was about me, but I prefer to be who I have been, shelve the research papers, reports, books and be truly about what matters – the most vulnerable. Someone once said me, “awards and titles are chains.”

Politicians will disguise the urgent need for change with the argument that it can only be achieved incrementally. Incremental change costs lives, allows for generations of suffering. Then the best we can do for First Peoples is ‘Special Courts’, ‘Problem Courts’, ‘Justice Reinvestment’, ‘Diversionary Programs’ and all this does not change anything. As someone once said to me, “They are just the rearranging of the deckchairs on the Titanic”. They are no different to the piecemeal second rate programs around the nation managed predominately by carpetbaggers who in fact mess with the lives of First Peoples. Give people equality. Let the people be free.

Nikyina Samantha Cook has proven that we can get to the streets – Ms Cook is one of the organisers of the #SOSBlakAustralia campaign that is doing more to win the battle to protect the Homelands than anything else. The reports that concluded that forcibly closing communities would be a dangerous thing to do were being fobbed off by politicians. The researchers could barely get a word in unless they minced their language. But Ms Cook saw the light and drowned out everyone, bringing the nation to an effective standstill. People are listening, including politicians.