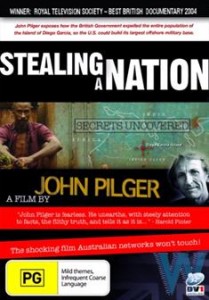 ‘Stealing A Nation’ (2004) is a film about the plight of the Chagos Islands, whose Indigenous population was secretly and brutally expelled by British Governments in the late 1960s and early 1970s to make way for an American military base. The tragedy, which falls within the remit of the International Criminal Court as “a crime against humanity”, is told by Islanders who were dumped in the slums of Mauritius and by British officials who left behind a damning trail of Foreign Office documents.

Before the Americans came, more than 2,000 people lived on the islands in the Indian Ocean, many with roots back to the late 18th century. There were thriving villages, a school, a hospital, a church, a railway and an undisturbed way of life. The islands were, and still are, a British crown colony. In the 1960s, the government of Harold Wilson struck a secret deal with the United States to hand over the main island of Diego Garcia. The Americans demanded that the surrounding islands be “swept” and “sanitized”. Unknown to Parliament and to the US Congress and in breach of the United Nations Charter, the British Government plotted with Washington to expel the entire population.

After demonstrating on the streets of Mauritius in 1982, the exiled islanders were given the derisory compensation of less than £3,000 per person by the British government. In the film, former inhabitants Rita Bancoult and Charlesia Alexis tell of how, in accepting the money, they were tricked into signing away their right to return home: “It was entirely improper, unethical, dictatorial to have the Chagossian put their thumbprint on an English legal, drafted document, where the Chagossian, who doesn’t read, know or speak any English, let alone any legal English, is made to renounce basically all his rights as a human being.”

Today, the main island of Diego Garcia is America’s largest military base in the world, outside the US. There are more than 4,000 troops, two bomber runways, thirty warships and a satellite spy station. The Pentagon calls it an “indispensable platform” for policing the world. It was used as a launch pad for the invasions of both Afghanistan and Iraq.

The truth about the removal of the Chagossians and the Whitehall conspiracy to deny there was an indigenous population did not emerge for another twenty years, when files were unearthed at the Public Record Office, in Kew, by the historian Mark Curtis, John Pilger and lawyers for the former inhabitants of the coral archipelago, who were campaigning for a return to their homeland.

John Pilger first become aware of the plight of the Chagossians in 1982, during the Falklands War: “It was pointed out to me that Britain had sent a fleet to go and save two thousand Falkland Islanders at the other end of the world while two thousand British citizens in islands in the middle of the Indian Ocean had been expelled by British governments and the only difference was that one lot were white and the others were black. The other difference was that the United States wanted the Chagos Islands – and especially Diego Garcia – as a major base. So nothing was said, which tells us something about the ruthlessness of governments, especially imperial governments.”

In June 2004, shortly before Stealing a Nation’s television screening, the British Government had issued an order-in-council, a royal decree using archaic powers invested in the Queen, bypassing Parliament and the High Court, to ban the Islanders from ever returning home. “The Queen rubber-stamps what in many cases politicians know they can’t get away with democratically,” said Pilger. “Dictators do this, but without the quaint ritual.”

In May 2006, the High Court finally ruled that the Chagossians were entitled to return to their homeland. However, in the summer of 2008, David Miliband and the Foreign Office began another appeal, to the Law Lords, against the High Court’s judgements. They found in favour of the Government.

In April 2010, the British Government established a marine nature reserve around the Chagos Islands. Several months later, WikiLeaks published a US Embassy diplomatic cable from 2009 which read as follows: “Establishing a marine reserve might indeed, as the FCO’s [Colin] Roberts stated, be the most effective long-term way to prevent any of the Chagos Islands’ former inhabitants or descendants from resettling in the [British Indian Ocean Territory].”

In the film, John Pilger concludes: “Why do we continue to allow our governments to treat people in small countries as either useful or expendable? Why do we accept specious reasons for the unacceptable? The High Court issued one of the most damning indictments of a British government. It said the secret expulsion of the Chagos Islanders was wrong. That judgement must be upheld and the people of a group of beautiful, once peaceful islands must be helped to go home and be compensated fully and without delay for their suffering. Anything less diminishes the rest of us.”

You can watch ‘Stealing A Nation’ here: