Spanish poet Miguel Hernandez (1910-1942): A victim of the Spanish Holocaust 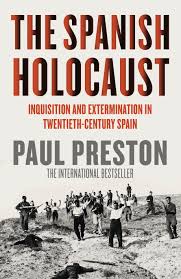 “Goodbye, brothers, comrades, friends. Let me take my leave of the sun and fields”
The last words of Miguel Hernandez scribbled on the prison hospital walls just before he died in 1942.

I am currently reading (very slowly) Paul Preston’s book The Spanish Holocaust: Inquisition and Extermination in Twentieth Century Spain which documents in gruesome detail the genocidal actions taken against Spanish civilians in the lead up to and during and after the Spanish Civil War (a review of the book is here).
Preston lays out the repression and genocidal crimes committed by all sides including the radical right and left.
Preston has argued that the ‘Francoists’- the radical rightists led by General Franco and his military, political, class, religious and civilian conspirators  killed more Spanish civilians than the Nazis killed Germans. 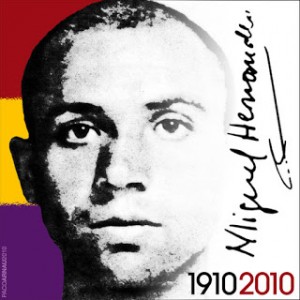 One civilian who died in Spain’s genocide was the poet Miguel Hernandez.

Miguel Hernandez (1910-1942) was a 20th Century Spanish poet, playwright and political activist. Hernandez is one of the finest poets of the tragedy of the Spanish Civil War (1936-1939) and is now recognized as one of the great Spanish poets.

During the Spanish Civil War Hernandez campaigned against the fascist forces led by General Franco. He enrolled in the Fifth Regiment, part of the Republican forces fighting Franco and the Nationalists and joined the First Calvary Company as a cultural-affairs officer, reading his poetry daily on the radio. He traveled extensively organizing cultural events and reading his poetry at rallies and on the front lines to Republican forces fighting the fascists.
After the victory of Franco’s fascists Hernandez and his family suffered terribly. He was arrested and imprisoned many times and eventually sentenced to death for his anti-fascist political activities and his poetry. The death sentence was commuted to 30 years imprisonment. The years of struggle and hardship and the harshness of his incarceration took its toll and he died in 1942 of tuberculosis.
Much of Hernandez’s poetry was written during the destruction and terror of the Spanish Civil War.

His poetry is a direct result of the brutality of the conflict and subsequent savage reprisals and executions. He produced an immense amount of poetry during his imprisonment.

Hernandez’s poetry and his example of committed political struggle against the forces of tyranny and injustice had immense influence on other poets, particularly the great Chilean poet Pablo Neruda who was in Spain at the time and was a friend and colleague of Hernandez.
His family continue to fight for justice and to clear his name. In 2010 they filed a law suit in the Spanish Supreme Court seeking annulment of the guilty verdicts against him.
You can read more about Fernandez here, here, here.
English translations of his poems are here, here and here.

Lark of my house,
keep laughing.
The laughter in your eyes
is the light of the world.
Laugh so much
that my soul, hearing you,
will beat in space. Your laughter frees me,
gives me wings.
It sweeps away my loneliness,
knocks down my cell.
Mouth that flies,
heart that turns
to lightning on your lips