Songs of Renown: Paul Robeson, Hirsh Glik and the Hymn of the Jewish Partisans 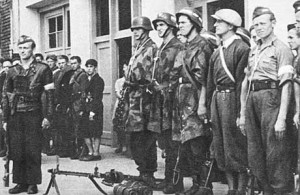 The song Zog Nit Keynmol (in Yiddish), also known under various titles- the Hymn of the Jewish Partisans, the Partisans Song or the Song of the Warsaw Ghetto- was written in 1943 by Hirsh Glik, who was a young Jewish poet, resistance fighter and inmate of the Warsaw Ghetto.

More about Hirsh Glik is here on the website Music and the Holocaust.
The song was adopted by Jewish partisans and resistance fighters and was a symbol of Jewish resistance against the Nazis. The song was often sung by people in concentration camps.
The song was a regular concert performance by Paul Robeson who sang the song in Yiddish and English. 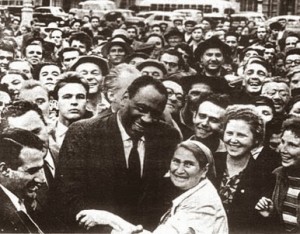 Paul Robeson sang the song in a Moscow concert in 1949 during the height of Stalin’s anti-Jewish purge. It was his protest against Soviet persecution of Jews.  In that concert, Robeson spoke in support of Jewish writers and actors in Russia and his friendship with Jews who had perished in Stalin’s purges.

Here is how the concert is described on the website of the  Jewish Partisan Educational Foundation:

Four years after the fall of Hitler, the tune would be used as a form of resistance against another 20th century tyrant. Paul Robeson traveled to Moscow in June of 1949 to give a performance to an audience that included many Communist Party elites, as well as what little remained of the Jewish intelligentsia after Stalin’s purges. At the end of the concert, Robeson stunned the audience with a surprise rendition of the Partisan Hymn. His introductory remarks contained references to the Yiddish language, the deep and enduring cultural ties between the US and Russian Jewish communities, as well as to leading Jewish intellectuals who had been “disappeared” by the regime.

The remarks, the spontaneous translation of the song to the shocked audience, and thunderous applause that followed were cut from the recording by Stalin’s censors, but the chaos is evident in the mixture of applause and jeers that follows the actual performance.

Here is a heavily censored live version of Robeson’s performance from that 1949 concert:

The following comments are from Paul Robeson’s son Paul Robeson Jr’s biography of his father:

… One could hear a pin drop during my father remarks about the deep and enduring cultural ties between the Jewish communities of the Soviet Union and the United States, about the common tradition of the great Jewish writer Sholem Aleichem, and about the continued vitality of the Yiddish language. Finally he announced that he would sing a song of the Jewish partisans who fought to the death against their Fascist oppressors in the Warsaw Ghetto.

Since the song had to be sung in Yiddish, he would explain the lyrics in Russian, as follows:

‘Never say that you have reached the very endWhen leaden skies a bitter future may portend;For sure the hour for which we yearn will not arriveArid our marching steps will thunder: we survive’.

For a moment there was no sound from the stunned audience; then a single intrepid young woman stood up and applauded, and the entire audience joined in a swelling wane of applause before my father could sing a single note. Only this response to my fathers remarks remains on the recording; Stalin’s censors simply cut out his remarks, and they have disappeared…”

The Song of the Wamaw [sic] Ghetto Rebellion sung in Yiddish (Zog Nit Keynmol) – remains an a crowning jewel of this recording of the Concert. The combination of power and pathos with which my father delivered this song transfixed his listeners. When he finished, the audience released its accumulated tension like an explosive charge. Although his listeners included many of Moscows Jewish intellectual elite who were waiting for Stalins axe to fell on them, the great majority were Russian members of the Party elite which was being decimated by a purge. Jews and Russians alike, in some places seated side-by-side, were either walking in the shadow of death or had lost someone close…

After that first release, the ovation continued to swell and recede in a series of waves which ebbed and flowed. People stood, applauded and cried out; they called my father by his patronymic-Pavel Vasilevich; some who were total strangers fell info each others arms and wept; still others sat silently with tears streaming down their faces. The first part of the audiences response is captured on this recording, but the rest has been cut by the censors. Still, the sound of this cry of hope is unforgettable, and there is little doubt that it was heard by the Master himself”

Never say that this is the end of the road.
Wherever a drop of our blood fell, there our courage will
grow anew.
This song, written in blood, was sung by a people fighting
for life and freedom.
Our triumph will come and our resounding footsteps will
proclaim “We are here!”From land of palm-trees to the far-off land of snow.
We shall be coming with our torment, with our woe;
And everywhere our blood has sunk into the earth
Shall our bravery, or vigor blossom forth.We’ll have the morning sun to set our day aglow;
Our evil yesterdays shall vanish with the foe.
But if the time is long before the sun appears,
then let this song go like a signal through the years.This song was written with our blood, and not with lead;
It’s not a song that summer birds sing overhead;
It was a people, amidst burning barricades,
That sang this song of ours with pistols and grenades.
You can read more of Colin Penter’s work here:
Categories : Arts & Letters