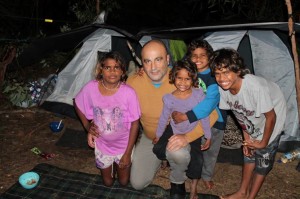 The writer with four of six kids from a family in need of a home.

The remote is an idea romanced by Governments when it comes to tourism but when remote communities ask for quality schools, utilities and services, Governments cold shoulder them. Families who want their children to someday have an equal footing to other children are leaving remote communities for the towns and cities, but they are paying a high price – homelessness. Finishing up homeless means they are risking losing their children to the Department of Child Protection.

Yesterday I met one of the families living homeless in Perth’s outskirt bush, just off a major highway. The Grandmother and the Father drove from their remote community near the Northern Territory border to Perth. Why? So they could give six children – aged 4 to 16 – a quality education.

“The quality of education in the remote is as poor as it gets. We’re years behind in the standards and levels to the city kids,” sad the Grandmother.

Western Australia’s Minister for Education is also the Minister for Aboriginal Affairs – Peter Collier. Last year he made cuts to additional resources spending for schools but hit the remote schools hardest – cuts once again disproportionately affecting Aboriginal children. The remote school that these children not long ago went to was one of the most affected by the cuts.

The family has spent three months in an out of sight bush camp half a kilometre off a major Perth highway but still within the city’s outer limits. They have several tents pitched, yoga mats that they sleep on, a tarpaulin to protect from the rains and the vehicle that they use to transport the children each day to school and to sport.

“I get up each morning, at 6am, to prepare them for school. They have breakfast and then we drive them three suburbs to two different schools. My son and I wait nearby their school till their day is done and bring them home. We cannot afford the petrol for two trips.”

There is a four year old who is in preschool, a seven year old, a ten year old, a twelve year old, a thirteen year old and a sixteen year old. I have now spent several hours with them on several occasions and they are a beautiful family. My only fear and why I have not identified them by name is the Department of Child Protection. As one of DCP’s former officers confided, “We have lower thresholds by which we judge Aboriginal families and the Department can deny it all they want but that is fact. I saw it all the time.”

Many argue the Stolen Generations have not stopped. Nationally, there are more than 14,000 First Peoples children that have been removed from their families – one in 17 children of First Peoples, a shocking statistic. 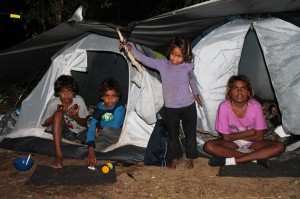 It is inexcusable that in the wealthiest State in the second wealthiest nation (per capita) that remote communities, because they’re populated by First Peoples, are deplorably neglected, and that families like this one languish in homelessness while they seek hope for the next generation. This is one of many families. The Australian Bureau of Statistics and the CENSUS, any survey for that matter, would miss this family altogether. Therefore they do not exist.

A recent Northern Territory report into education found that indeed remote school students are two to three years behind on average. The quality of education available that Governments claim to be adequate in the remote is actually so low that they have no or very little hope. The Federal Minister for Education, Christopher Pyne and the Federal Minister for Indigenous Affairs, Nigel Scullion must heed and respond to reality, because this is about people’s lives.

My partner and I were able to garner some support for this family and the prospect of accommodation, but what about all the other families? What about the Governments failing these people? What about those of Government funded agencies in not being able to help these people? We’ve organised food parcels for this family, raised some funds for them, with $1000 of it pledged generously from the Ian Thorpe Foundation, thanks to Jeff McMullen. We’ve organised clothes, sleeping bags, etc. We do need to get this family out of the cold winter that will hit hard. Unless Child Protection screws it all up, we will more than likely find this family accommodation. It says, or even indicts, when ordinary people, like me and my partner, with limited resources can do much more than Governments and much more than their highly paid and well-resourced parliamentarians. We should all be jaded by now by the excuses, the blame shifting and the bullshit by our parliamentarians.

The mainstream media has to cop it too –  they do not follow the real news, they neglect the plights of families such as this one. The news that matters is through-care journalism, advocacy journalism, the news that changes something for the better.

LINK to NIRS radio news with the Grandmother here: