Shanty-town, yes, but where are the people to go? 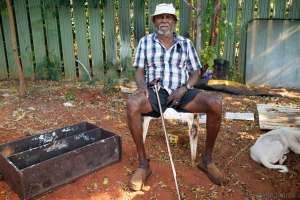 Kennedy Hill is a shanty town, an unofficial town, in the tourist mecca of the Kimberley. Its twelve buildings were home to families, to more than 120 people. In recent months the local Aboriginal Corporation vacated three of the houses of its residents. Some of them moving into other Kennedy Hill homes already overcrowded. Some leaving for Broome to sleep rough. But last week, the first phase of the demolition of Kennedy Hill’s shanty town began. Three houses and two other dwellings were demolished.

Derelict homes, deemed unfit for human habitation, are the only homes many families with nowhere else to go have. But the Broome Shire wants the residents evicted and the houses demolished. The Mallingbar Aboriginal Corporation states it cannot afford to repair them.

There was no plan for where the homeless would go, who the Broome Shire and State Government refer to as “squatters” and “itinerants”. The Kimberley has one of the nation’s worst homelessness rates – nearly seven per cent of its total population is homeless. Grinding poverty straddles alongside affluence right throughout the tourist mecca and resources rich Kimberley – but the wealth does not get disbursed proportionately. It is a narrative well worn.

“They will never take me from this place while I am still alive.”

“The Department of Housing are not supporting us. They helped to destroy us,” said Mr Wiggin.

“It is getting worse.” But he says there is nowhere else to go.

“Most difficult thing here is people drinking and bringing grog and smoking ganja.”

“It’s not a good place for children.”

Mr Wiggin said that the condemned buildings should have been demolished long ago but replaced with quality homes. The community should have community infrastructure and services – all the essentials. It is where more than a hundred people congregated and eked out an existence. 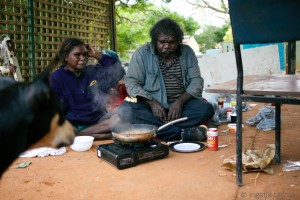 The shanty town of Kennedy Hill is the product of Government neglect. It is the only shelter the homeless have – Photo, Ingetje Tadros

Mr Wiggin said families that vacated prior to the demolitions “still live in the community.”

“It is very overcrowded.”

How is it that the mining boom Western Australia, responsible for 46 per cent of Australia’s mining exports cannot afford to address the housing crisis gripping the Kimberley?

Broome resident and international photojournalist, Ingetje was present at Kennedy Hill during the demolition.

“A total of five houses were demolished. They started with the corrugated iron walls of one house.”

For years Ms Tadros has been visiting the itinerants and homeless not only of Kennedy Hill’s shanties but also of other nearby shanties such as at One Mile Community.

“Three of the houses demolished housed families but had been empty for months since they were moved on.”

Ms Tadros said the families vacated the houses without a fuss.

The demolishing of communities and stranding the homeless is a recurring theme with the Western Australian Government. It was not long ago they evicted all the residents of the Kimberley town of Oombulgarri – 62 homes. Recently, the Minister for Aboriginal Affairs, Peter Collier announced that the Oombulgarri homes will be demolished. It is expected this will commence in November. At long last a major advocacy organisation, Amnesty International, has jumped on board to petition against the demolition and that the former residents be allowed return to their homes.

The majority of the Oombulgarri residents were ‘trucked out’ to Wyndham, where many of them sleep in a tent-city on the outskirts of Wyndham. This tragedy is now two years old. All of them want to return to Oombulgarri. 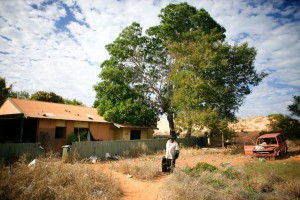 Seven per cent of the tourist mecca Kimberley is homeless, with 90 per cent of the homeless comprised of First Peoples. This gentleman sleeps rough more often than not – Photo, Ingetje Tadros

In Perth, the Swan Valley Nyungah Community was evicted from its 20 hectares of land and earlier this year its eleven homes were demolished. Many of the former residents finished up homeless, some dying on the streets.

The Broome Shire launched legal action a couple of months ago to coerce the State Government to demolish the properties at the Mallingbarr community of Kennedy Hill.

At the time Minister Collier said, “The removal of the houses is imminent through the Aboriginal Lands Trust (ALT). I think the ALT will be making an announcement on that in the very near future.”

The ALT is a significant landholder with responsibility for approximately 24 million hectares, or at least ten per cent of Western Australia’s land mass.

“The ALT, through its board and the chairperson (Shane Hamilton), are charged with the management of the ALT estate for the benefit of Aboriginal people across the State, and provide a committed, strong and independent voice on issues of importance,” said Mr Collier.

“The ALT has a clear mandate to better utilise the Aboriginal Lands Trust estate to achieve economic outcomes for Aboriginal people. This includes continuing work towards land divestment, the transfer of land to Aboriginal organisations to build their capacity and secure an economic return from assets.”

The Kennedy Hill houses are on land owned by the ALT and leased to the Mallingbarr Aboriginal Corporation.

For several years in my work with The National Indigenous Times and now with The Stringer we have campaigned for ways forward for the homeless of the Kimberley – we have visited Kennedy Hill, One Mile, the shanty towns and squats in and around Broome and throughout the Kimberley.

Mr Collier’s Department of Aboriginal Affairs is seeking quotes for the demolition.

Kennedy Hill is down to seven homes.

Mr Campbell, Minister Collier and Premier Barnett, where are the families, the young families, the children, the elderly supposed to go? Where?

The Broome Regional Aboriginal Medical Service CEO, Henry Councillor said that the children are at risk of chronic diseases, including hookworm and ringworm. But on the streets they are at risk of much more. More needs to be done for them while at Kennedy Hill.

A couple of years ago I interviewed Broome-based First Nations filmmaker, Mitch Torres who said that homelessness is rife throughout the Kimberley – and getting worse.

“The homelessness is getting worse and no-one is doing anything about it. The Shire and Government have let it slide along.”

“Hostels and housing had been promised but forgotten in squabbles between the Shire and the Government.”

“I can take you into the heart of Broome, its Chinatown, to Dora Street and you will see homelessness you have never seen before,” said Ms Torres.

“I can take you to One Mile, to Kennedy Hill and the horror of it is right throughout the Kimberley region – in and around Derby, Fitzroy, Kununurra, everywhere.”

“It is unbelievable that such a rich part of Australia has this horrific homelessness and nothing is being done to reduce it.”

But if there was a will then Governments would build quality ‘micro-home’ communities complemented with the full suite of services. But alas the will to do so is not there.