Ruthless City of Sydney Council, who do you think you are stealing the tents of the homeless? 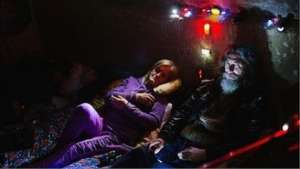 The homeless of Wentworth Park – Leonie and Lenny sheltering in one of Park’s viaducts – Photo, Cole Bennetts, Sydney Morning Herald

The inhumane mercilessness of the City of Sydney Council was on show in February when they had the police muscle up in escorting council workers to remove the tents of the homeless from inner city Wentworth Park. Sydney’s homelessness is extensive and on the increase. Governments – local, State, Federal – are doing next to nothing to reduce homelessness or to lessen the burden of homelessness. Where are the homeless friendly precincts in the major hubs of our capital cities and largest towns?

Hundreds slept rough in the relative safe space of Wentworth Park – many sleeping under the cover of the 21 viaducts that straddle the park. The crowd of homeless folk at the Park was some security, a safer location than the isolated alleyways, condemned squats and traps that so many others sleep in.

Where else are the homeless to go?

But it seems these days Shires and Councils just do not care. On February 11, police escorted council workers to Wentworth Park to effectively move on the homeless sleepers.

The Sydney Morning Herald journalist Lucy Cormack interviewed some of the homeless on the day.

“We are trying to live,” said Leonie Valentine.

Ms Cormack reported that council workers collected tents, tarpaulins, couches and tents from the viaducts while the homeless had to pack up their belongings.

“I’ve been here six months and my whole place is kept clean all the time,” said Lenny Mitcherson.

“It was getting us through till we can get somewhere better.”

“They told me I had ten minutes to get my tent and stuff down.”

City of Sydney Shire reckons their policy is not to move the homeless on but that the homeless should keep their possessions to a minimum, that is a swag and a couple of bags.

Local and State Governments spend wildly on cultural, sporting and artistic enterprises, facilities and events. A spend on homeless friendly precincts would be comparative pittance but the political will is just not there. There is little point arguing for more public housing, Governments have obstinately refused to budget for more appropriate public housing levels. So what is to happen to the homeless who sleep rough, who are increasing as an underclass. What about the rights of the homeless?

The City of Sydney Council reckoned it was getting complaints about the homeless at Wentworth but Ms Cormack reported that “local resident Pauline Selwyn has lived across the road from the park for three years and said she was sickened that ‘no-one seems to care’”.

Ms Selwyn said, “I’ve cooked for them for tonight. I’ve got soup and Mongolian lamb. I’ll bring down bread and stuff. I’ve watched this unfold and I’m just absolutely powerless.”

Last September, the City of Sydney Council sent in their ‘troops’ to dismantle the makeshift shelters of the homeless at Wentworth Park. For years the homeless had sheltered in tents in the 21 viaducts of Wentworth’s light rail bridge. Council is prepared to let the homeless swag it but without tents, how muddled minded is this?

The City of Sydney removed two tonnes of items from Wentworth Park – the belongings and makeshift comforts of the homeless.

Last September, the Sydney Morning Herald journalist, Michael Koziol reported, “There were 296 rough sleepers on the night of August 12, when the Council performed a head count – up 16 per cent on winter 2013.”

“It’s bloody freezing this winter. They’re making themselves a little home down there. I don’t know what the community expect homeless people to do.”

The remaining homeless of Wentworth Park are asking where does the City of Sydney Council expect them to go? How does the City of Sydney Council expect them to survive? They ask when will the State Government agencies house them, they ask when will their stories, their trials and tribulations be heard? The majority will be waiting forever and a day. State and Federal Governments have failed to prioritise the addressing of homelessness as one of the nation’s priorities. There are few greater legacies that Governments can have than in the improving of lives, than in saving lives, than in eliminating homelessness. It is a can do but there needs to be a will and the political will is most certainly not there. Australia is the world’s 12th largest economy, 2nd wealthiest nation per capita so there are no justifiable excuses for Australia’s homelessness crisis.

According to Homelessness Australia, “on any given night one in 200 people are homeless.” This is a horrific rate but it is more likely one in 100 to one in 150 people homeless persons. According to the Australian Bureau of Statistics (ABS) there are 106,000 homeless Australians, 56 per cent males, 44 per cent females. More than a quarter of the homeless are of First Peoples and 30 per cent are of people born overseas.

But the horrific untold tragedy is the child homelessness that most Australians do not know about because our mainstream media barely reports it. This is also because our 226 federal parliamentarians barely give homelessness a whisper.

18,000 of our homeless are children under the age of 12 years old. Can you believe this? I have met many children on the streets, many large homeless families. I have worked solidly for years in housing homeless children and large homeless families. The Stringer’s producer and editor, Jennifer Kaeshagen coordinates the grassroots First Nations Homelessness Project and recently housed a homeless family of 8 children, with the youngest 30 days old. Ms Kaeshagen with no resources and no funding has done a better job of housing people than have Governments and their heavily funded departments and agencies. In Western Australia, there are 48,000 people on the public housing waiting list but in the last six years the Government has only built on average 700 public houses per year. For Aboriginal remote communities a paltry 494 public houses, third rate dwellings, have been built in the last five years.

Australia’s Governments and each of its parliamentarians should hang their head in shame for failing to 1) speak to the issues in the radical manner required to address homelessness and 2) for doing next to nothing about homelessness.

Nearly 30 per cent of Australia’s streeties – the homeless doing it rough – are under the age of 18 years of old. Seventeen per cent are under 12 years of age and the rest are between 12 years and 18 years, another 11,000 homeless young people aged 12 to 18 in addition to the 18,000 children less than 12 years old. Another 16,000 are aged 19 years to 24. This means nearly every second homeless Australian is aged under 24 years.

Mr Godfrey continued, “The local authority had $566 million in the bank last year and total equity of more than $7 billion – including a huge land and property portfolio.”

“Income from the city’s parking metres alone was more than $35 million.”

“Yet hundreds of people sleep rough in the city each night while Ms Moore, who has campaigned to help people evicted from public housing at Millers Point, is spending $9 million on wacky public sculptures and $20 million on a green power plant for Town Hall.”

I am with Mr Godfrey. Our City Councils have their priorities all wrong.

“If you live in Millers Point public housing and vote for Clover you have rights. If you live in a tent in the park and don’t vote you get moved out.”

Lord Mayor Clover Moore’s response was a sad cop out.

“The City works with rough sleepers to connect them with the appropriate services and help them to access accommodation. The City also needs to encourage responsible behaviour by all people in our public spaces while ensuring that disadvantaged people are not discriminated against and are treated with compassion and respect.”

In my view, that is a rubbish statement, typical of politicians, bureaucrats and of the lazy.

In my view, this four minute YouTube clip by Radical Son says it all – “Council, leave those tents alone.” This is a must-do view.

Respect has been lost for the homeless.

Leave a Reply to ulrike zachmann