Russell Moore – one of the uncountable tragedies of the Stolen Generations 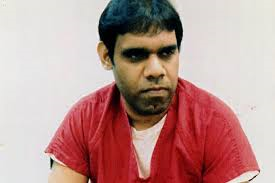 I often think of Russell Moore – we were born in the same year. I was raised by my natural parents. He was ripped from his mother’s arms as part of the Stolen Generations. It was 1962 when more children were being removed from their Black parents because of their Blackness. You would have thought that less children than for instance in the 1920s, 1930s and 1940s were being removed in the 1960s, but alas. Maybe this is an insight as to the record high horrific numbers of children removed from their parents today.

But Russell, known to many as James Savage, is in an American prison. His mother is near the end of her days. She has spent a quarter of a century, half her son’s life, in trying to have Russell transferred to an Australian prison. In this mother’s end run to life, she would like to be able to be nearby the son that was stolen from her not long after giving birth to him.

“I just want my son nearby as I come to the end, as I am now getting sick. I would like to see him, hear him,” said Beverley Moore. Ms Moore is a Waamba Waamba woman from the Swan Hill region in Victoria.

Russell was only 4 days old when he was stolen by authorities from Ms Moore. Of course he was stolen. We should stop reducing the language of what occurred. The rule of law should not be allowed to change or disguise this fact. The rule of law legitimised an evil practice, legitimised eugenics, and made society a monster, destroying lives. On February 13, 2008, the head of the Australian nation, the Prime Minister, apologised for the ‘stealing’, for the systematic destruction of lives.

Mr Moore – James Savage – in 1989 was sentenced to a minimum 25 years for a despicable 1988 murder. He was adopted and raised by a White family in Australia who were missionaries with the Victorian Salvation Army. When the young boy was 7 years old they relocated to America. His adoptive parents never told him of his past. But he wondered about who he really was. He did not look like his parents, his dark skin and their porcelain white skin bespoke of parents he never knew. As a troubled youth he spiralled into drink and drugs and finished in and out of correctional institutions. Ironically, his adoptive parents returned to Australia but without him. Mr Moore finished up homeless on the harsh streets of America.

“I don’t think my son would have finished up as he had or as any of my family have, had we been allowed to live free, to be Aboriginal people, to look after ourselves as others are allowed to look after their own,” said Ms Moore.

“The Stolen Generation has destroyed our whole lives and the impacts have not left us. What the Australian Government did to us was life sentences to all of us. What they did to us we live today and tomorrow and into tomorrow’s tomorrow.”

“My son is alone over there.”

“In the end whatever he did, I don’t excuse it, but he is my boy, taken from me just after birth.”

After Russell, Ms Moore had six more children, two who died in infancy. But Ms Moore lives in the hope that she will be reunited with her eldest son if at long last the American authorities agree to a prison transfer to Australia.

Late 1988, Russell Moore then known as James Savage and with a long criminal record, was charged of sexually assaulting and strangling Barbara Ann Barber in an alley behind her interior design shown room.

During the investigation and trial it was uncovered he was originally from Australia. It took this horrific tragedy for his mother to find where her son was. The death penalty was sought for Russell but he was sentenced to life with a minimum parole period of 25 years, which he has now served.

At the time, on the court’s verdict, Ms Moore said, “They took my son away from me 26 years ago, and they just killed me tonight.”

“My son is paying for his own mistakes and for the Australian Government’s mistakes.”

Ms Moore frets she will never see her son again. Archie Roach who wrote the song, “Took The Children Away”, wrote a song about Russell, of his being taken from his mother, “Munjana” (Beverley’s Aboriginal name).

Archie Roach - Took the Children away