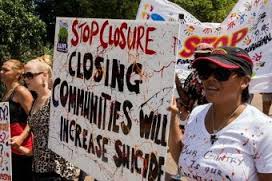 As soon as I released part of the list of remote communities – Homelands – to be targeted for ‘audit’ by the Western Australian Government, all of a sudden, ‘leaked’ lists were secured by other media. But the onus of what I argued that my Government insiders had to say was let slide altogether by the mainstream media. The mainstream media failed to chase down why the Government is doing what it is doing and instead kept signifying finely tuned Government mantras; ‘audit’ of community infrastructure, viability, sustainability, cost benefit, and to the latest sell of social ills.

In the story I wrote, “More than two years ago, a Federal Government insider, and then again last year a State Government insider, told me that the Western Australian Government was bent on closing down the majority of Homelands – ‘remote communities’. The agenda for this was not necessarily spruiked by assimilation, though this would be its tool, but by a bent to take possession of the vast interior of Western Australia and its top end for resources extraction, various development, for commercial interests, for ‘food bowl’ and agribusiness economics. They want no hindrance.”

“The near total erosion of Western Australia’s Aboriginal Heritage Act is a clear indicator of the fact that they want to make it easier for developers, commercial interests and miners. In the last year more than 70 per cent of the State’s sacred and ceremonial sites have been deregistered.”

“The threat to close down Homeland communities is not about a municipal bill, not about ‘viability’. Once again, what is happening is not about assimilation, it is about exploitation. Assimilation is the being used cruelly and evilly to allow for the plan to exploit the vast interior and the top end.”

Mainstream media is spun with all sorts of misinformation and ‘leaked’ documents from Ministerial sources as suits the agenda of government and corporate power. There are two types of government ‘sources’ – those who work with their Office and plant stories and those who provide information unbeknown to their Office. The first is censorship by misinformation, censorship by omission. This is about corrupting the narrative and it is about corrupting the debate.

Not a single mainstream media has factored commercial and mining interests into the equation. The only mention of this in mainstream media was an off the cuff comment by singer songwriter Troy Cassar-Daley on the ABC’s Q&A program most recently, “I’d like to know what (the government) would like to use the land for…”.

One day after I published which communities are genuinely at risk, the ABC’s Andrew O’Connor reported on a leaked report (see here) Mr O’Connor stated the State Government “has held a list of 192 communities deemed unsustainable, prompting renewed calls for immediate consultation.”

“The leaked 2010 document clearly shows that 192 communities had already been judged to be on the wrong side of that line.”

Yesterday, The Guardian weighed in with a follow up on the report. Journalist Calla Wahlquist reported that the State Government claimed it would not be influenced by the ‘old’ ‘leaked’ report.

But that so-called ‘report’, which is bare to the bone reductionist stuff, was ‘leaked’ in order influence us.

Western Australia Aboriginal Affairs Minister Peter Collier said to Ms Wahlquist, “The criteria for closure of those communities was to be based on population, housing and infrastructure.”

“Well quite frankly, that’s appalling. If they’re going to use that criteria to close an Aboriginal community, well they need their heads read.”

It is Mr Collier who needs to get his head read alongside quite a few of his colleagues.

Mr Collier now reckons that the decision on whether a community should be closed or starved of basic services should be based on a “much broader” set of criteria.

“It will not be done on a bland economic front in terms of dollars. It’s simply not the case,” said Mr Collier.

It is about the mainstream media asked what Mr Cassar-Daley asked, “I’d like to know what (the Government) plans to do with the land.” I first answered that a few years ago. But though the mainstream media has been following my articles, backgrounding themselves, they are reticent to venture that extra step into whether the threat to the Homelands has anything to do with making it as simple as possible for resource extraction companies to have their way with the land. When the mainstream media moves on to this imperative question and seriously chases down the answers then the State Government’s long standing agenda will be exposed and the Homelands saved.

Instead the mainstream kept on publishing Premier Barnett’s relatively recent line on why some communities should be closed; the hogwash that it’s about the ‘safety of children’ – unsubstantiated child sexual abuse, incidences of children with gonorrhoea. Both sides of Government are too scared to go after the miners and developers, and all political parties too timid to chase them down. Why? Because the miners and developers are political powerbrokers and also influence the mainstream media and can do a lot of damage to any political party. A politician once said to me, “We don’t pick fights we can’t handle.”

Premier Colin Barnett reckons that he has had to raise issues others feel uncomfortable about because according to him little has improved in these communities for First Peoples.

“But it is my responsibility as Premier to make sure that children are safe. That they go to school, have a good education and goog health and that they have good prospects in life. That is what’s driving me.”

The real reasons that many of these communities are impoverished are because they have been intentionally neglected by State Governments. One Government after another has refused to upgrade even the basic essentials – power and water supplies. It is on record – Hansard.