Remembering the vision of Tom Wills 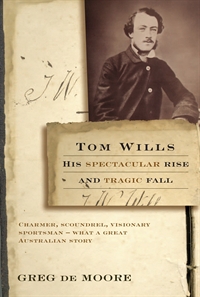 “I often think that, although he was a cricketer and created this Aboriginal cricket team, that this act of his creating the team, was one of our first great acts of national healing between white and black Australians”
Greg de Moore on Tom Wills
The juggernaut of the commercialized and corporatised version of AFL Foootball is thankfully coming to a close after 8 months. Next week is the Grand Final and large swathes of the nation will stop for a couple of hours to watch that game.  Australian Rules Football is a uniquely Australian sport, played no where else in the world.

For the millions watching the AFL Finals the name Tom Wills (1835-1880) won’t mean much. Which is a pity. Wills was one of the founders of the game and perhaps its first superstar. Wills also understood and lived with the consequences of the profundity of this country’s history of Aboriginal and non-Aboriginal relations, an experience embedded in the Australian psyche.

The Australian writer Martin Flanagan calls Tom Wills a uniquely Australian legend whose story draws together many elements of our national and collective past.  Greg de Moore (who wrote a biography of Wills) and Martin Flanagan both note that Wills was one of the early pioneers who acted to heal the wounds caused by Australia’s racist history.

Tom Wills was born in Western Victoria and went to the UK for schooling. There he played first class cricket and on his return to the colonies in 1857 captained Victoria in cricket. Wills was the leading cricketer in the colony and was instrumental in establishing cricket matches between the colonies.
In 1858 Wills proposed an “activity” to keep cricketers fit off-season, and in 1859 called a meeting to form football teams. Wills was instrumental in writing the rules of  what become Australian rules football and was coach, umpire and one of the leading players in the competition. He was instrumental in forming teams all over Melbourne and Geelong. Wills was also one of the dominant players in the competition.

In 1861 Wills moved to Northern Queensland to work on his father’s property. Wills had been there just three weeks when a party of Aboriginal men killed nineteen of the group, including Tom’s father in one of the biggest massacre of whites by blacks in Australian history. Tom was away from the property at the time.

Martin Flangan writes that in the retributive raids that followed, three times as many blacks were killed.

The events left a profound legacy. Despite the massacre of his father and friends Wills had a deep relationship with Aboriginal people in Queensland and Melbourne. He spoke the language of the Tjapwurrung people from west Victoria where he grew up.
Upon his return to Melbourne Wills  continued to play football and cricket playing his last first-class match in 1876, at the age of 40.
Six years after the massacre, Tom Wills captained the Aboriginal cricket team that became the first Australian cricket team to tour England. Most of the Aboriginal cricketers were Jardwadjali men from western Victoria. Their language was almost the same as the Tjapwurrung people which Wills spoke. On Boxing Day 1866, Tom Wills captained the Australian Native XI at the MCG.
However, psychological trauma from the massacre combined with his alcoholism took its toll and Wills developed delirium tremors from alcoholism, extreme delusions and night terrors. After a stay in the Kew Asylum he was admitted to Royal Melbourne Hospital in May 1880 and shortly afterwards escaped. Within days Wills committed suicide by stabbing a pair of scissors through his heart. He was just 44.
The Australian singer songwriter Neil Murray has written a fine tribute titled Tom Wills Would.