Redneck agenda to close down communities 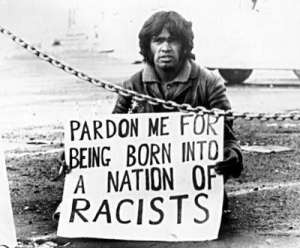 The Western Australian Government’s move to close down up to 150 of 274 remote communities has been labelled redneck racism. It is the ugliest act of racism to be seen in this nation in 70 years, with many fearing that it will pale the ugly racism of the Northern Territory ‘Intervention’. Elders, advocates and former politicians are warning the State Government to not close down the communities of First Peoples, that to do so will lead to a further spiral of suicides, despair, homelessness, to irreparable trust issues between First People and Governments but also to hate.

According to Elders and advocates, Premier Colin Barnett has resorted to scaremongering and lies to propagandize the need for the closures. Ninety per cent of the communities are not affected by suicides nor by substance abusing nor by any pronounced social dysfunctions. The majority of these communities are poor, neglected by Governments, but they are not in any social chaos.

Pastor Stokes journeyed 600 kilometres from Kalgoorlie to speak at a rally on the steps of State Parliament calling for the protection of the remote communities while inside Parliament the Premier was justifying his call for the closures.

“For nearly two centuries here in Western Australia the Black man and Black woman have been trodden on, smashed, even had the White man trying to bleach out the Black from us. It does not stop. They drag us off Country in chains, relocate us, dump us, then move us again and they see the impacts, the despair and suicides, and now they are going to do it to us again,” said Pastor Stokes.

Premier Barnett said he “acknowledges” the decision to close down communities “will cause distress.” It will cause much more than just “distress”. He is claiming high rates of suicide, poor health and a lack of job opportunities is why he wants to close the communities.

“What a liar! Everyone knows this is an assimilationist agenda and secondly that this is a total demolition job on what is anyway the charade of native title rights. He is opening the interior to the miners. He is using lies to portray First People as incompetent, as aimless, as jobless, as substance abusers just so to get rid of the communities,” said Noongar advocate, Marianne Mackay.

“The suicides are not everywhere, the substance abusing is not pandemic, like in White and Black communities it exists but you address the substance abusing where you can, you help, you do not lie and blame the whole community. Are they going to close White towns of 100, 200, 400, like Quinunup, Nannup, Balingup? Of course not, this is a Black-target only agenda.”

“Since when did this Government ever do anything about poverty in our communities, or about the suicides. They pretend it’s all in the too hard basket but they do so much for the White populations, build big White towns all over our Country but want to demolish towns and communities where First People live. The racism speaks for itself.”

Former chairperson of the Kimberley Land Council, Wayne Bergmann said more First People would be marginalised than before.

“Homelessness will increase, overcrowding will increase. People will move into towns and houses will be overcrowded, causing social disruption.”

Mr Bergmann stated that there will be “devastating social chaos.”

Former Indigenous Affairs federal minister, Fred Chaney also described social chaos. He said the towns the remote community residents would be relocated to would lead to “squalor”. He suggested that the transition from remote communities to the big regional towns should be done “in a proper, civilised, planned way.”

But Ms Mackay said, “There is no civilised way for this, it just should not happen at all. People have a right to live where they want and in how they want to live.”

One of the Freedom Summit’s organiser, Narrunga Elder, Tauto Sansbury said, “This is ugly racism, not just deplorable, it is evil, cruel, murderous. It is treachery, betrayal, connivance.”

“Native Title is rubbish, it cannot even protect communities on Country. The Freedom Summit is coming because we, as the First Peoples, are betrayed at every turn. We will reclaim the Aboriginal rights struggle, we will come to Alice Springs as one and stand as thousands. We have no-one and nowhere else to turn to but to ourselves.”

“It is not just Western Australia that will close down communities and break our people, it is South Australia too, it is a rollout across the nation to diminish us as a people and to reduce our rights.”

Even the Chair of the Indigenous Advisory Council, Warren Mundine, described the closing down of the Western Australian remote communities as “apartheid”.