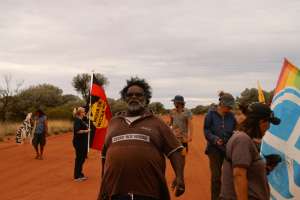 Pushing Aboriginal people off their land for mining interests is nothing new in Western Australia, but Premier Barnett’s plans to close 150 communities and gut the Aboriginal Heritage Act takes it to a new level, reports Mia Pepper

You’d be forgiven for thinking West Australia was the Wild West. The announcement from the WA Government to close 150 Aboriginal remote communities comes hot on the heels of plans to gut the Aboriginal Heritage Act.

Pastor Geoffrey Stokes, a Wongutha man from Kalgoorlie, was out hunting one day near Mt Margaret when he encountered a mining company, Darlex, literally about to dig into a cave – an Aboriginal Heritage Site. This particular site had been lodged with the Department of Aboriginal Affairs by the Goldfields Land and Sea Council 23 years earlier – but still had not been officially registered and thus the company was about to destroy the site without having gained permission or consulting with the Aboriginal custodians.

On inquiries made to the Department of Aboriginal Affairs (DAA) about this site, it was revealed that something like 10,000 sites have been lodged but never registered.

This is how the system works. Traditional Owners can lodge a site with the DAA and the Department may or may not register it – depending how busy they are over a period of about two decades. Once it is registered a mining company can then apply to destroy it anyway, but rest assured if it’s registered you’ll be consulted about the sites impending doom. However if you don’t visit the site regularly, under a changed Aboriginal Heritage Act it’s likely to be deregistered.

I’m reminded of being at a mining conference in WA where the then Minister for Mines and Petroleum gave a keynote presentation. He ended by inviting everyone to stay around for a raffle – “the prize is a free Aboriginal Heritage clearance.” The miners roared with laughter. The Minister re-used the joke at the time of the raffle – allowing us to record this sick joke about the religion and culture of Australia’s first people. When played back to him in Parliament, he scoffed and said it was taken out of context.

Just around the corner from Mt Margaret is Mulga Rocks – the site of the latest uranium mine proposal by a company which has recently changed its name to Vimy Resources. Vimy is like an all-star cast with a former Fortescue Metals Group (FMG) executive as Director, a former Liberal MP on the Board of Directors and generously funded by Twiggy Forrest. Vimy recently submitted a scoping study for Mulga Rocks, which is near Kalgoorlie and adjacent to the Queen Victoria Springs an A Class Nature Reserve.

In submissions made to the scoping study, the DAA provided comment in response to the proposal saying the company should minimise impact to Aboriginal Heritage, should consult with the DAA and the Central Desert Native Title Service, and suggesting that some sites may still be under the protection of the not- yet gutted Aboriginal Heritage Act. The company responded: “No Native Title Groups claim the areas and no traditional owners undertake any traditional activities in the area.”

That comment was based on a 1982 ‘study’ by an American anthropologist – using a dubious methodology for the study. The Anthropologist just kind of asked around in the nearest town (150km away), a process that identified at least one family who used to go out, no further inquiries were made about that family. The family survived and live in the area but are yet to be consulted. Neighbouring communities and interested communities are yet to be consulted and the company refuses to consult, stating the project won’t impact anyone so there’s no need.

The closest community to the proposed Mulga Rocks mine is called Coonana and has been on the Government’s hit- list of communities to close down for many years. Slowly but surely the WA Government has cut all funding to the community and it is now virtually a ghost town. Coonana is a refugee community, people that have been moved from community to community over generations. Known as the Spinifex people, they came across the border from South Australia following the nuclear weapons tests at Maralinga and Emu Field in the 1950s.

The starvation of services to Coonana should send alarm bells in light of the proposal to close 150 remote communities. At Oombulgurri in the Kimberley, the strategy was to demolish houses … no resettlement, no alternative housing, nothing. As the country tries to heal from centuries of displacement and bad Government policy, this Government is creating another generation of displaced people.

The changes to the Aboriginal Heritage Act are due to be debated in the WA Parliament in the first quarter of 2015. The plans to shut 150 remote Aboriginal communities are much more secretive − the Premier Colin Barnett has promised consultation but has refused an invitation from the Kimberley Land Council to join a joint Land Councils meeting about the closures.

Proposals to use royalties money from the mining industry to meet the funding shortfall have been squashed by the Premier. As the mining boom crashes and the Government’s focus is on supporting industry rather than communities, we are expecting further attacks on communities and culture to make it easier and cheaper for mining companies to get projects off the ground.