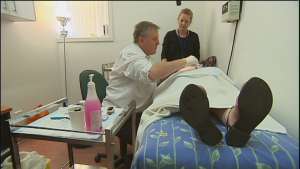 Dr George O’Neil at one of his drug rehabilitation clinics is calling on Prime Minister Abbott to save Saeed Hassanloo – Photo, abc.net.au

Dr George O’Neil is a long-time leading rehabilitative physician for those with high end substance addictions. His work is cutting edge and saves lives. Gerry Georgatos has led the way these last two years in suicide prevention research for Aboriginal and Torres Strait Islander people. Both O’Neil and Georgatos are calling on Prime Minister Tony Abbott to grant clemency and ensure the refugee status of 44 day hunger striker Saeed Hassanloo who is now unconscious.

Mr Hassanloo had instructed that he was not to be resuscitated – it is now the 44th day of his hunger strike – the 24 year old sees nothing but the bleakest despair and would rather die than remain stateless and in immigration detention. But if Prime Minister Abbott grants Saeed refugee status then the Prime Minister can intervene and have Saeed resuscitated.

The shambolic reactions from the Department of Immigration and the Federal Minister for Immigration and Border Control, Peter Dutton and his staffers bespeak of Kafkaesque conduct and of a hollowness of moral fibre that should not be countenanced by the Australian nation.

Georgatos has led the research and the awareness-raising on the extensiveness of suicide within Aboriginal and Torres Strait Islander people and on the ways forward. His work has generated Government responses. He sought direct ministerial approval from Mr Dutton to visit Saeed – while Saeed was still conscious. When he contacted Minister Dutton on the Saturday, Minister Dutton responded that sadly Saeed had passed away. Minister Dutton had skimmed over a press statement prepared prematurely for him by his staffers in readiness for his expected passing. This is how much the Federal Minister’s office has their finger on the pulse. Minister Dutton when contacted by a major news station stated to the station’s producer that Saeed had passed away. A little later one of Mr Dutton’s staffers phoned the television news station to state that Minister Dutton had ‘misheard’ and that Saeed had not yet passed away.

Humanitarian, Dr O’Neil, who has saved thousands from heroin addictions, contacted Royal Perth Hospital as an interested physician who like Georgatos wanted to meet with Saeed but was referred to Minister Dutton. When Dr O’Neill phoned Minister Dutton, his staffers were upset that the Hospital had given out their number. There is a media blackout – a lockdown – organised by the Minister’s office.

“Gerry Georgatos, who is a hero in suicide prevention, and myself, a physician who works with the most vulnerable, with high end drug addictions, and who both of us understand the despair of this young man psychologically, both of us should have been whisked in to meet him, to help save his life where possible,” said Dr O’Neil.

“If this young man dies and the Prime Minister failed to intervene then Mr Abbott must resign. In fact if he does not have the moral fibre to intervene at this time he must resign immediately and allow for a caretaker Prime Minister to intervene and grant clemency – refugee status to Saeed and his brother who have both been imprisoned, not detained, for six years in Australian immigration centres.”

“The Prime Minister must grant refugee status and order the resuscitation of Saeed.”

“The doctors and nurses who are attending Saeed at RPH are embarrassed. Doctors throughout our medical communities are appalled and embarrassed by the Government’s conduct. The media blackout is murder,” said Dr O’Neil.

“Saeed Hassanloo has spent 20 per cent of his life punished by the Australian Government for seeking asylum.”

“This young man’s death will be blood on the hands of the Minister and the Prime Minister.”

“Minister Dutton has made it clear he has no intention to save this young man who will die in the next few days. Prime Minister Abbott is ultimately responsible and he must now intervene.”

Dr O’Neil has contacted Senator Julie Bishop, pleading for her to urge for Prime Ministerial intervention.

“The secrecy around this man’s hunger strike will lead to this man’s death.”

“I am very upset with the Government just watching this young man die,” said Dr O’Neil.

Gerry Georgatos said, “Saeed can only be saved now by a pardon, clemency, and only directly so from the Prime Minister. Mr Abbott must demonstrate the type of character and morality he is calling on from President Joko Widodo for the two Australians facing execution.”

“If Saeed can be saved then he should be saved instead of becoming Australia’s first hunger strike death, which is unbelievable for a country such as Australia, though we live now in difficult and disappointing times, and in murderous times. The disgusting media blackout, the secrecy of his hunger striking, where for the first 35 days of Saeed’s hunger strike the Australian nation, the Australian media did not know anything about it can only be described as Kafkaesque stuff. An independent full-blown inquiry should be launched immediately, with those responsible for the censorship and secrecy hauled over the coals.”