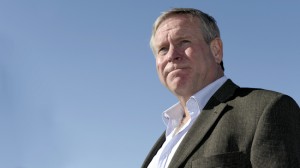 Rumours have long swelled Noongar communities that the Premier of Western Australia, Colin Barnett has Noongar heritage. Scores have told The National Indigenous Times throughout the last couple of years of the Premier’s supposed Noongar roots. But for the first time the Premier was confronted in person about a possible Noongar heritage.

The Humphries family claimed that Premier Barnett is in possession of a will of a relative, the late Gertrude Humphries. They were of the view that the Premier for reasons not clear was impeding probity in the passing on of the proceeds of her estate.

Premier Barnett agreed to speak to the Humphries family on the steps of parliament. Premier Barnett had just concluded a media conference and a swathe of media was present.

Premier Barnett said he was not in possession of anyone’s estate or of any will to that estate.

“I do acknowledge Noongar people. I acknowledge them at events I go to and particularly where there are Aboriginal people and at Welcomes to Country. I always do that,” responded Premier Barnett.

The Humphries family responded with a flurry of comments but Premier Barnett said to them that he would not continue to speak with them “if you are rude.”

One of the family said to Premier Barnett that he is a Noongar. Premier Barnett responded, “I am not Noongar.” After being interrupted by the family he decided to walk away and headed towards the Parliamentary doors. But the Humphries family blocked his path.

He then walked around them when a female member of the Humphries family said to him, “You are my second cousin.”

Premier Barnett stopped and said to the lady, “I am not your cousin. I am not related to you in any way.” He then walked inside and that was the end of it.

But the rumours continue. Grassroot Noongars, educated middle class Noongars continue to insist he is a Noongar – “therefore a brother” and that “he has to own up to his heritage and not be ashamed.”

Some believe he was a Stolen Generations child or the child of a Stolen Generations victim. Premier Barnett was born in 1950 in the affluent Perth suburb of Nedlands. Whether he has Noongar heritage or not may need a little investigating but if he is it really would be up to him to identify or not. It is well known that former John Howard “Intervention” Minister Mal Brough has some Aboriginal heritage “going way back” but that he is not really interested in being anything else other than “Australian.” I have met several former and present politicians who do have some Aboriginal heritage but do not identify whatsoever and therefore they have never been numbered among the parliamentarians – past and present – who are First Nations people.