Premier Barnett, you promised – In the name of Ms Dhu, where are the Custody Notification Service & the end to jailing fine defaulters? 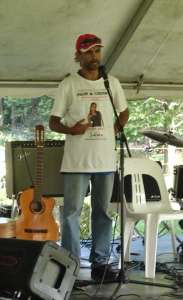 The family of the 22-year-old Yamatji woman, Ms Dhu, who needlessly died in a Western Australian regional police watch-house in August last year, is still waiting for the State Government to lock in the date for the coronial inquest. Family members are still waiting for long overdue systemic changes and laws to be implemented that had they been in place at the time of Ms Dhu’s detainment would have saved her life.

Grandmother, Carol Roe, said that the family is suffering while in its wait for promised systemic changes.

“We are all waiting for the inquest, so the truth be known,” said Ms Roe.

“We are all waiting for the changes that were promised to us in the name of my granddaughter that will save the lives of our people.”

Premier Barnett has said that the coronial investigation will occur sometime midyear.

“The Government just continues to let us down. Why are they taking so long on implementing what they have promised? Last October, several days before the rally at State Parliament, the State Government promised to implement the Custody Notification Service. But we are still waiting. Why? That Service would have saved the life of my niece. If another life is lost in the meantime while we wait on them to deliver this promise how will they explain themselves?” stated Mr Harris.

A significant portion of my PhD research was about deaths in custody, custodial systems, racialisation and racism. In my volunteer correspondence for various media, I broke the news of the tragic death of Ms Dhu. It was a death that never should have occurred – like so many others. Ms Dhu should never have been arrested and detained. She should have been supported by crisis and health care at all times. I have studied more than 100 custodial deaths but this tragic death was pronounced in terms of systemic failures jurisdictionally with police, health and legally.

Within weeks of Ms Dhu’s death I began a series of meetings with the Federal Minister for Indigenous Affairs, Nigel Scullion to lobby for the implementation of the Custody Notification Service in Western Australia. I have written widely on the Custody Notification Service – for more reading on this go to the links at the end of this article. I also pushed for the ending of the detainment and jailing of fine defaulters in Western Australia. The Minister agreed and we began the campaign to win over the Western Australian Government.

But it is now nine months.

This is not good enough, not when human life is on the line.

I was also contacted by members of Western Australia’s Police Union to urge through the Custody Notification Service. This would relieve their officers of various burdens, of judgement calls. They also asked me to keep campaigning for an end to the police having to deal with fine defaulters. I have lived up to these requests. The Police Union representatives said “it is not on” for them to publicly speak out.

The Western Australian Government must not delay further on its promises, certainly not on the Custody Notification Service and certainly not for the end to the detention and jailing of fine defaulters – everyone in Government, all members of parliament should urge all this through instead of sitting on their backsides.

The Custody Notification Service has been implemented in NSW since 1998 at the pittance cost of $500,000 annually. Since 1998, there have been no deaths in NSW’s police watch houses of Aboriginal and/or Torres Strait Islanders. Minister Scullion said, “That speaks for itself.”

Premier Barnett, please have the decency to move all this along. There is no greater legacy than the saving of lives.

“It’s all words so far from Mr Barnett. When I see the evidence of what’s promised then I’ll believe what has been promised will occur. Till then I will continue fighting in the name of my niece,” said Mr Harris.