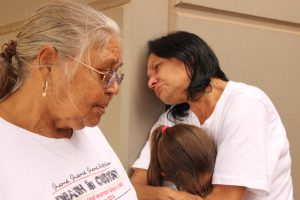 South Hedland police screwed up disastrously hence thereafter arresting the young Ms Dhu last year on August 2nd. They had been called out to a disorderly in effect to assist her but after a background check arrested her for outstanding fines. Instead of helping the highly vulnerable young woman, the Hedland police obeyed obscene laws unique to Western Australia that lead to the apprehension of fine defaulters. In 1988, the NSW Government put an end to the jailing of fine defaulters but 27 years later Western Australia remains behind the times.

Today, I spoke to relatively high level police officers – they said that the Western Australian Police are working behind the scenes, pushing the State Government to hurry up with the implementation of the Custody Notification Service, so as to relieve their police officers from the burden and impacts of judgments calls particularly with respect to the health of a detainee. According to police, a Western Australian Custody Notification Service maybe announced in weeks at most. The deplorable death of 22-year-old Ms Dhu demonstrates why police officers should never make judgments about whether a detainee is “feigning” illness. The coronial inquiry, underway, into Ms Dhu’s death has heard from physicians who state had Ms Dhu been properly examined, diagnosed and treated, that more than likely she would still be with us. Police accused Ms Dhu of “faking” and furthermore had the obscene temerity to prosper that view to the Hedland Health Campus personnel.

An end to arresting and locking up fine defaulters, who in other words are the impoverished and troubled, would ensure that another Ms Dhu does not die in a police watch house. The implementation of the Custody Notification Service would also relieve police of having the power of life and death over a detainee where health complaints are raised.

Police do have one of the toughest gigs, dealing daily with what most of us would be riled by or would run scared from if faced with what they face but the conduct of the Hedland police officers to Ms Dhu, and to so many others in similar circumstance, is not just merely disturbing but abominable. Structural racism and oppressor/oppressed authoritarianism is perniciously rampant. Police officers are just people, who cognitively without their uniform are merely the sum of their views and like everyone else are vulnerable to assumptions and prejudices.

During the rest of this week the coronial inquiry will hear from the triage staff, nurses and doctors, who the police twice presented Ms Dhu to but who did not even take her temperature. They presumed her as ‘disorderly’ and that according to them she was presenting with “behavioural issues” that they reckon were as a result of substance abusing. If they reckoned this then they should have considered her possibly at high risk of complications from her misuse of drugs in addition to the health issues she had raised. Ms Dhu complained of being generally unwell, in physical pain, of rib cage pain, of a previous injury to her ribs that may have been sustained in domestic violence incident. She also had an infected blister on her foot. Doctors have said that if Ms Dhu was given antibiotics even the day prior her death the septic infection and shock that would eventually kill her may have well been beaten and her life saved. Next week, the coronial inquiry will hear from the Hedland police officers. They will have to explain why they though she was “faking” and “feigning”, why they did not take her seriously, why they did not call an ambulance, why they allegedly laughed at her, why in her final hour of life they dragged the dying woman along the cell floor and out into the corridor and then carted her by the arms and legs and dumped her into the pod of a police vehicle bound to the Hedland Health Campus. They will be asked why a police officer did not get into the police vehicle pod and watch over her, to keep her body safe and steady.

In my view it was multifactorial why they mistreated Ms Dhu. It was not misogyny, as some suggest, that is nonsense but predominately it was racism and classism. If they presumed her a liar then they must have presumed her as lowly scum, and in our society we know all too well this view of others exists, majorly. Despite all the cultural awareness training in the world, despite all the anti-racism and anti-discrimination training, despite all the whatever, nothing can guarantee an end to racism, classism, discrimination, not in our lifetimes. The Western Australian Police know that they can never score all their officers in the ways we would like them to be, it is not easy done, not in any workforce, not anywhere. But they know the Custody Notification Service will provide a highly trained advocate, someone who can deal with the caution that the Hedland police officers failed to deliver.

Last year members of the Western Australian Police Union contacted me, thanking and urging me to sustain the push for the Custody Notification Service. It has been a long hard slog. It should not have been. Many, including police, are angry with the State Government for dragging its feet on this issue. Fourteen months ago, Premier Colin Barnett promised to make a real difference, to date he has failed to live up to the promises. Next week, it will be messy for the Hedland police officers but it may well have been the impetus long overdue to get a Custody Notification Service implemented hopefully before the end of the year, and its announcement following next week’s difficult stretch for the police,  plus a tabling of motions in State Parliament to end the jailing of the poorest and most troubled, those who we choose to label fine defaulters.

On October 14, 2014 I wrote this about police urging for the Custody Notification Service.

I urge the Western Australian Police Union and the Western Australian Police to ensure there are no delays with the establishment of the CNS (through the Aboriginal Legal Services WA). The establishment of the Custody Notification Service will be a sliver of human dignity for detainees and a weight off the backs of coppers. The other weight that needs to go is police having to arrest fine defaulters. To ensure no delays to the CNS they need to make the announcement soon and to ensure an end to arresting fine defaulters they need to go public, now, with the call for this rather than rely exclusively on behind the scenes discussions and on the advocacy for this by other institutions and individuals. If the Western Australian Police and the Police Union speak up publicly then rest assured mountains will be moved. To the Police I say, this will definitely get across the line sooner what you want. This is in the interests of your police officers. We know what went wrong at the Hedland Police watch house and at the Health campus. The coronial inquest is only a replay of what on this occasion has been ever so visible since August 4, 2015. If we do not get it right now, then we are real bastards. We need to hurry up and consider the affected families of Ms Dhu. We need to move to the calls for expeditious compensation payments to the family. Ms Dhu leaves behind five siblings, a mother, father, grandmother. This family has been tormented for 16 months. Ms Dhu’s uncle, Shaun Harris has campaigned relentlessly for the ‘truth’ during these 16 months right across the nation. Compensation can help the family and improve trauma recovery and validate the love that should be shown to them. Do not psychosocially strand this family, not after what racism, neglect and stupidity took away. Do not betray them. Do not make victims of Ms Dhu’s siblings, some whom are still children, do not let them drift into a morose life of anger and displaced anger.