Poetry from the front: John Cornford and the Spanish Civil War 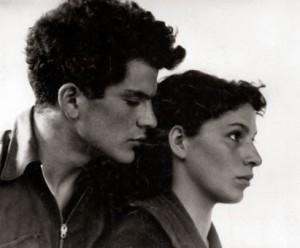 “And if bad luck should lay my strength

Into the shallow grave;

Remember all the good you can”

The poet and political activist John Cornford  was just 21 years old when he died in Spain in August 1936.

Cornford was one of the first British volunteers to join and die in the International Brigades, young men who flocked to Spain to fight on the Republican side in the Spanish Civil War  in the cause of anti-Fascism against Franco’s fascists.

Cornford who was born in 1915 was the great-grandson of Charles Darwin and born into a distinguished Cambridge family. His father was a Professor of Ancient History and his mother a poet  and friend of the great WW1 poet Rupert Brooke.

Cornford had written poetry during his formative years of schooling and time at Cambridge University where he been active in militant and radical politics. However, it was during his time fighting at the front during the Spanish Civil War that he became more prolific.

Cornford had originally gone to Spain as a freelance journalist after the Spanish military, under the leadership of General Franco overthrew the democratically elected Republican Government. He arrived in Spain three weeks after hostilities broke out and went to the front to observe the fighting. It was there in the town of Lecinene that he was inspired to enlist in the POUM militia, an antifascist group.  He spent 6 weeks on the front lines

Cornford returned to England for a short period in September 1936 to recruit English volunteers and then returned to Spain where he fought in the battles for Madrid  and Boadilla during which time he wrote most of his well known poems. Cornford was killed at a battle near Lopera in late December 1936, the day after his 21st birthday. His body was never recovered.

Cornford is perhaps most well known for his love poem Poem (also known as Heart of the Heartless World) written for his girlfriend Margot Heinemann. The poem is acknowledged as one of the most memorable love poems of the 20th century.

Cornford also wrote political poetry reflecting his experience at the front line in Spain, such as Full moon at Tierz: before the storming of Huesca.

Biographical essays on John Cornford can be found here  and here

Poem
Heart of the heartless world,
Dear heart, the thought of you
Is the pain at my side,
The shadow that chills my view.
The wind rises in the evening,
Reminds that autumn is near.
I am afraid to lose you,
I am afraid of my fear.
On the last mile to Huesca,
The last fence for our pride,
Think so kindly, dear, that I
Sense you at my side.
And if bad luck should lay my strength
Into the shallow grave,
Remember all the good you can;
Don’t forget my love.

Full moon at Tierz: before the storming of Huesca
The past, a glacier, gripped the mountain wall,
And time was inches, dark was all.
But here it scales the end of the range,
The dialectic’s point of change,
Crashes in light and minutes to its fall.
Time present is a cataract whose force
Breaks down the banks even at its source
And history forming in our hands
Not plasticine but roaring sands,
Yet we must swing it to its final course.
The intersecting lines that cross both ways,
Time future, has no image in space,
Crooked as the road that we must tread,
Straight as our bullets fly ahead.
We are the future. The last fight let us face.