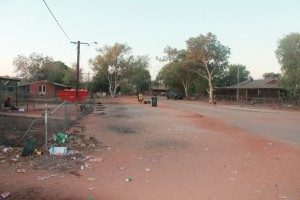 One Mile Communty – If you visit and stay at the town camps as I have then there is no denying Australia’s apartheid – Photo, Gerry Georgatos

Suicide is the leading cause of death for Australian teenagers. Suicide is a leading cause of death for Australians 15 to 50 years of age. Suicide touches nearly every First Peoples family; on average each year taking one life in every 20 Aboriginal and/or Torres Strait Islander deaths. This is the reported rate of suicide but it is likely as high as one suicide in every ten deaths.

There is no greater legacy that any Government can have than to have saved lives. However at this time instead of working together to save lives the Western Australian Government is caught up with in-fighting, schoolyard akin. The Opposition – the Labor Party – tabled a condemnation motion of the Government – the Liberal/National Parties. They allege that the State Government has failed to adequately respond to the suicide crises. Well, this is true.

However when the Labor Party was the Government they likewise failed to adequately respond. Their track record is appalling. Both records are appalling, sadly, tragically.

Instead of seeking to condemn each other they should be immersing themselves in the ways forward and educating each other at the parliamentary decision making level towards the legacy of saving lives. They need to improve the social health of communities to the point that it will translate to the saving of lives.

Reading the Hansard copy of the parliamentary debate saddened me. I wished I had been there to correct them or to guide them.

On March 18, the Labor Party’s Hon. Stephen Dawson moved “that the Council condemns the Barnett Government for its failure to combat the rise in suicide rates amongst Western Australia’s Indigenous population.”

The Hon. Dawson referred to the suicide spate in 2006 in the Kimberley – in Balgo, Mowanjum, Fitzroy Crossing and Derby. The overall suicide rate has increased since then despite the suicide rate among First Peoples naturally decreasing from the outlier spike of that year. But suicide as a cause of death is increasing for Western Australians and remains disproportionately shockingly high for First Peoples.

The Hon. Dawson made a suite of pertinent points but was undermined by a number of statistical errors which were latched on by Minister Helen Morton to tear apart the Hon. Dawson’s narrative. I was surprised that these mistakes could be made.

The Hon. Dawson also referred to myself, “In the article I referred to earlier, a researcher with the Aboriginal and Torres Strait Islander Suicide Prevention Evaluation Project, Gerry Georgatos, who may be known to members in this place as he is involved in a great number of Indigenous or Aboriginal agencies or causes, was reported as saying that — … the holiday season was a high-risk time for many Aboriginal people, who had a greater sense of hopelessness at being unable to buy presents or provide adequate food. The problem was exacerbated in the Kimberley due to the high levels of poverty among Aboriginal people.”

““Almost 100 per cent of suicides in the Kimberley are poverty-related,” he said. They were the words of Mr Georgatos. I am not sure where he got his figures from when he said that around 100 per cent of suicides in the Kimberley are related to poverty. Without having that kind of research in front of me, I will say that poverty can certainly be linked to many of the cases but things such as alcohol and drugs are also responsible for or related to these suicides. Mr Georgatos then referred to local Aboriginal-led suicide prevention strategies or bodies that operate around the State, including the local Halls Creek Healing Taskforce, which had been running some good, local, culturally appropriate projects in Halls Creek. But that body was unable to attract funding from the Western Australian government, which meant that the programs it was running were at risk. The article goes on to state — Mr Georgatos said the State government’s response to the suicide crisis was “pitiful”.”

Yes, the response has been “pitiful”.

In understanding causality, one must understand the social health of a community, whether in the remote or in a large urban mass. The social and emotional wellbeing of a community or urban mass is borne of its overall social health. Extreme poverty is the predominant factor in underwriting social distress and suicide in middle and high income nations. It is not so much of a factor in low income nations, as there is a sense of equality of being in low income nations. However being born into disadvantage in a middle or high income nation highlights unfairness, discrimination, racism.

Substance abusing is not the causal factor but a subsequent factor.

Social health determines everything and unless social health is the focus then we are going nowhere.

The Hon. Dawson states, “It is a complex issue.”

In fact the solutions are simple – social health, equivalencies, equality.

The Hon. Dawson is correct with the following, “I return to the amount of effort that the government put into shark deaths in this State. I honestly do not believe that we have seen the same level of focus on the number of Aboriginal people taking their lives. For that reason, I, too, think it is pitiful. I am certainly not saying that this Government or this minister has been doing nothing in the space of suicide prevention. I guess I am saying that I am not sure we are doing all we can. I look forward to the Minister’s contribution to this debate later. I hope she can tell us what she and her colleague the Minister for Aboriginal Affairs are doing and intend to do in this space to ensure that the number of Aboriginal people committing suicide, particularly young people, decreases.”

He was also correct with, “One of the lessons we should have learnt over the years is that it is no good white people deciding what is best for Aboriginal people or Indigenous people.”

(Source for the above Hansard extracts: here)

The Minister for Mental Health, Helen Morton responded on April 22. Her responses can be found in Hansard. Here.

The Minister misunderstands the ongoing high rates, trapped in the skewed data of collectivised medians. The degeneration of the parliamentary discussion into a tit for tat while lives are stake was disturbing. Reading these two parliamentary discussions, a month apart, gives me no hope in that whoever governs will make any substantive difference to the desperately needed ways forward.

Extraordinary high numbers of people will continue to die prematurely, unnaturally and by suicide.

When a suicide rate of a whole region is maintained over a period of ten years as high as 70 suicides per 100,000 Aboriginal and/or Torres Strait Islander population, seven times the national rate, then this is an indictment.

Furthermore when we disaggregate to the most vulnerable groups, we unmask even higher rates of suicide. Disaggregated, the most at-risk group are the 25 to 30 year olds. Nationally, First Peoples males aged 25 to 30 have a reported suicide rate of 91 per 100,000 Aboriginal and/or Torres Strait Islander population. However, regionally they have reached rates of 200 per 100,000 population.

To wrap up, for two decades the Western Australian Government has hobbled along with the poorest understandings of Aboriginal and/or Torres Strait Islander suicide, and of suicide in general. Their responses have been next to nothing.

Minister Morton believes that the Government has been substantially responding to the suicides crises. Minister Morton argues that her Government “has spent $800,000” on suicide prevention in the last financial year. Minister Morton needs to understand that funding “workshops” or that “$10,000 grants” for this and that are by no means a response to suicide.

Suicide is the tip of an iceberg.

According to the United Nations Development Program Australia ranked second behind Norway for public health. But when I disaggregated to the First Peoples of Australia only, they ranked equivalent to 130th in the world. Government responses must address social health – holistically. Suicides have to be understood as a culmination of wider issues, as the tip of an iceberg – for every suicide it is generally estimated that there are up to 40 attempted suicides, immeasurable levels of suicidal ideation, thousands of self-harm hospital admissions. The wider issues are borne of extreme conditions disparate to the conditions enjoyed by the rest of the nation’s population.

When racial groups endure higher rates of extreme poverty, when they endure intergenerational disadvantage then racialisation, racism and identity are naturally intertwined and amplified. In this context it is inescapable for identity to not be viewed as a liability – going to the heart of self-worth. Trauma is also amplified.

I beg the Government – its parliamentarians to fully understand and appreciate causality: social health, the disparities, inequalities and realise racism, racialisation and their impacts.

Politics should be a calling, not a game of who will manage the joint. This business of politicians as opponents has to be set aside when lives are on the line.

There is so much I would like to advise our State Government but after reading the parliamentary debate, I just do not know if they will listen. There needs to be an imperative response to the social determinants. While we work towards improving social health overall we must be there for those in need right now. A real time critical response is required to community distress – prevention, intervention, postvention. The internal dynamics of communities need to be intertwined, a form of self-determination. Resources need to be provided to ensure people are there for people. In the end people need people – we have to drop the self-responsibility mantras.

There is no greater legacy that any parliamentarian can have than to have played a role in the improving of living conditions to the point that this saves lives – reduces community distress, reduces dysfunction, reduces the rate of premature, unnatural deaths and suicides.