Long before I used a wheelchair, another person with muscular dystrophy looked at me kindly and told me this.

“One day you can do something, and the next day you can’t. And you wonder when you lost that ability, and how many other abilities you will lose.”

I nodded and agreed and didn’t really think much about it. I’d always known I had a disability, and my official diagnosis – of limb girdle muscular dystrophy – had arrived when I was twenty three. And then one day, I went to brush my hair, and my arm felt like it had lead weights attached to it.

It is a funny thing, those changing benchmarks and the way they affect you. The next day, I went and had my long hair cut short (my daughters were dismayed) and joked about it without telling anyone how heavy the hairbrush had become, how unwieldy the hair straightener now was. Just like I hadn’t told anyone how I could no longer shake a doona into a doona cover, or why the kettle was only half filled, just enough for one cup of tea or coffee.

The biggest benchmark, of course, was the moment that I started using a wheelchair.

Impossible to conceal, and the biggest issues are not around the physical barriers but around the societal barriers. People look at you differently, treat you differently. Last week, I was in a shop, and a little boy came up and asked me what ‘fruit’ that was that I was buying. I smiled (it was asparagus) and smiled more when he said ‘sparrow grass’. A delightful conversation, all in all, until his mother came over and told him to stop talking to me. That’s okay, I told her, we’re having a chat. No, she said. I don’t let him talk to people in wheelchairs, they might have diseases.

You understand, perhaps, how this would affect a person’s psyche. You are no longer regarded as a mother, an employee, a wife, a pet owner, a member of the community to be treated as any other. You can’t get a job because of it – you are routinely discriminated against because of it. It takes its toll, all that – and add to it the never-ending fear about will happen in ten or twenty years when you need a lot of disability care and support, knowing that it is not there. The thought of living in a nursing home at fifty, the thought of the resigned look in your child’s eyes when you are no longer their parent, but their patient. Wondering whether you will ask your husband or your child to change your tampon, or whether you should choose the gun or the knife or the rope, if you are still able. That terror is mitigated a little when you know others who have high support needs and who live a good life – but imagine that terror that a newly diagnosed person with a degenerative illness feels at the point of diagnosis.

Enter the Multiple Sclerosis of WA.

Imagine the shiniest of charities, with a glossy annual report, a 30 million dollar turnover, ongoing raffles and charity houses and sparkling six bed ‘facilities’ for young people broken out of nursing homes. The ‘business of disability’ is prominent in their advertising and the board is predominantly made up of people with business and financial management acumen, with a couple of high profile medical professionals and a few people with multiple sclerosis.

That’s the organisation that created the ad that hit the headlines a few days ago. It was a confronting and controversial TV ad, part of a bigger advertising campaign, designed to strike fear into the hearts of the community and tug on their heart strings. The ad, named ‘Trapped’, portrayed a woman trapped in a Perspex box, desperately trying to smash her way out. Cut to a sympathetic nurse asking if she is all right – the woman sits in a wheelchair, unable to move, and a single tear trickles down her cheek.

People with multiple sclerosis were outraged. One woman in the early stages of MS slammed the ad saying it “put fear into her kids”.

“This is a terrible ad…It put fear into my kiddies as my disease is nothing on that level… And to say if I ever meet a partner being open with my health … He run a mile thinking I’ll end up in that state…. I’m disappointed … U made my disease look so horrific.”

Another person with MS said the ad was “shocking”.

“What exactly are you ppl trying to achieve???? Decrease our work opportunities ? Traumatize our children with the worst case scenario. What if the Cancer Council used the same low tactics?” 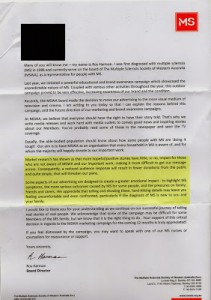 Within hours, the ad was removed, with CEO Marcus Stafford posting a sombre apology for removing the ad and distressing members.

For the rest of the world, that is where it ends. They screened a controversial ad that portrayed disability in an incredibly negative light, showed a story that depicted the circumstance of only a few of their members – most people with MS do not experience the level of disability depicted in the ad – and removed it after a public outcry. Good, people say. It’s over. And it was only an ad.

Look at it a little more closely – look at it from the perspective of a person with disability who is *in* the disability sector – and the implications are terrifying.

The MS Society recognised the ‘risk’, clearly, that some of their members would be damaged by the advertisement, that the public perception would be damaging. They explained it away in a letter to members – ‘Market research has shown us that more hopeful/positive stories have little, or no impact, for those who are not aware of MSWA…consequently, a reduced audience response will result in fewer donations from the public, and quite simply, that will threaten our plans….we appreciate that…showing these hard hitting details may leave you feeling uncomfortable and even confronted, particularly if the diagnosis of MS is new to you and your family.’

The FAQ’s attached to the letter are even more revealing. ‘Why are you using fear rather than a positive approach? …we’ve carried out research to determine what does and what doesn’t spark positive action from viewers. What we’ve learned is that the more confronting the advertisement, the more it inspires people to stand up and take action in support of the issue. In this case, finding a cure for MS.’

In other words – we knew it would cause incredible harm, but we did it anyway.

I watched the ‘Trapped’ video – you can see it here – and thought about why you’d choose to portray people with disability as tragic and pitiable objects of charity. Why, to raise money, of course.

It’s a headfuck, my friend. 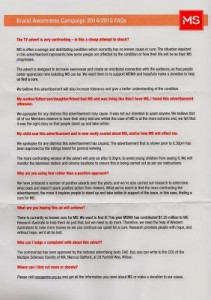 There are things that people with disability know when they’re *in* the disability sector that make this act a hundred, a thousand times worse. Aside from the terror experienced by women who are not sure who will change their tampon in the future.

If you’re not *in* the disability sector, you would not know about the bright, beautiful and utterly miserable woman with multiple sclerosis who has been locked away for over a decade in an old C class public hospital – the Quadruplegic Centre, an institution in Shenton Park. She desperately wants to leave, but cannot get enough care and support – and has never been assisted in any way by the MS Society of WA.

If you’re not *in* the disability sector, you would not necessarily understand that the idea of being recipients of charity lowers the self-esteem of people with disability. Because people with disability are seen as tragic victims, it follows that they need care, are not capable of looking after themselves or managing their own affairs, and need charity in order to survive. 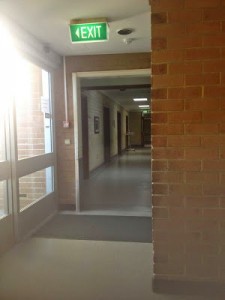 Text description: The hallway in the Quadruplegic Centre, outside the residents’ 12 x 12 rooms

There is no cure for multiple sclerosis, and there are thousands of people with MS and other degenerative disabilities living without support around Australia. Only a few percent of the charity’s fundraising goes to ‘research’ – yet the aim of the ad was to raise funds to find a cure, they say. Yet in the letter to members, the ‘aim’ is to ‘raise awareness and educate the public’ – by portraying a fairly atypical story via a ‘shock’ advertisement – to raise funds, and to ‘position MSWA strongly in preparation for the launch of the National Disability Insurance Scheme’. Can you hear the clang of cash registers?

At what cost are these advertisements run? In the eyes of ‘pitying’ donors, charitable giving carries with it an expectation of gratitude and a set of terms imposed upon the beneficiary. The first is patronising; the second limiting upon the choices open to disabled people. We’re charitable cases, and you don’t need to employ us, nor put in a ramp, nor meet social or economic obligations in any other way – ‘I made a cash donation to those people on the phone last week’, and it made me feel good about myself.

Do we still need charity? Sure. I think caring, charitable acts enrich our society and reinforce the idea of community. But not at any cost – and especially not at cost to people with disability who will be penalised in other ways. If they’re using our images, our names, our cause to raise funds, we should have a say in how we are depicted. How hard would it be to actively include their members, or put together formally recognised community reference groups that approve marketing campaigns and inform the charity about community need? Why can’t charity managers review the way they operate, actively involve people with disability and ensure that funds are channelled towards initiatives that will promote inclusion into society as equal citizens?

We need support. We need funds for research. But we also need respect, and a voice, not your pity.

It’s a headfuck, my friend.