Phillinka Powdrill – the majority of suicides were preventable 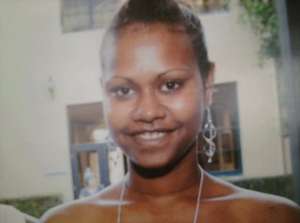 Photo published at the request of the mother… Kimberley born and raised Phillinka was lost to suicide aged 18 years old.

Gerry Georgatos – Lena Andrews thinks of her daughter, Phillinka, every day. Phillinka, eighteen years old, died by suicide in the Kimberley’s Fitzroy. The services failed Phillinka. No-one but her family was there for her. Phillinka ended it all by hanging, on October 18, 2014.

Lena and her family were not supported. It was all piecemeal. The grief remains toxic half a decade later.

I remember that harrowing day when Lena phoned me. I need not describe it, you can imagine.

I know Lena well, we have spoken hundreds of hours and we travelled together, with another suicide affected family, to meet a Prime Minister, Malcolm Turnbull. Lena talked of Phillinka to Malcolm. On the day it meant much to Lena.

I never met Phillinka, but it’s as if I know Phillinka.

–       Phillinka’s father, Daniel Powdrill, “You used to come to me with a smile… I can’t find the strength to accept that you are really gone. I cry myself to sleep just thinking about you. You have left a big hole in my heart and there is no one that can ever cover that.”

–       Phillinka’s mother, Lena Andrews, “When I first held you, I knew you were mine to keep, to love and to hold forever… You left a huge hole in my heart that no one can cover, no one else can replace you my daughter.”

Suicide prevention is a lie, but the profiteers claim otherwise. The carpetbaggers come in all sizes. They posture, fail to deliver and then argue for more funding, get it and fail again. Have they no shame?

The grim reality of an increasing suicide toll is masked by ‘strength-based’ discourses, by positive stories alone.

Phillinka was a suicide that never should have occurred; the majority of suicides were preventable.

The suicide crisis has been an uninterrupted crisis three decades long.

I have often written that in many ways our Governments are making it worse, on the one hand effectively neglecting this tragedy while they wax lyrical about how much they care and on the other hand they have all the wrong people and policies piecemeal responding to this tragedy but stumble backwards.

How many young people such as Phillinka must be lost before this nation is disturbed into action?

There are no words for any suicide.

Phillinka was resilient, she was enthusiastic and she was from a large family – with a father and mother who loved her dearly. She had completed boarding school in Melbourne, at Wesley, through Yirimalay.

“Once again it was just families supporting families, but all our families are broken by suicide, by our children jailed. We are broken people. It cannot be this way, but it is. I have lost my beautiful daughter and the pain does not go away.”

“This year I have lost my mother and my sister, more pain and no-one there for us.”

“I have considered suicide, but my children keep me going.”

“I have had you listening and to call.”

The suicides are not complex in understanding the causal pathways, the narratives, the stressors, the listening and support that is needed.

Rather than hear my experiential voice, hear Lena’s.

Walmajarri and Bunaba woman, Lena Andrews, states what leads so many of her people to suicide.

“Our people are smashed by it, hurt by it, tortured by it. This is a nation of two peoples. The First Peoples and the Australian peoples and unless First Peoples do as they’re told then they are punished by every means.”

Phillinka is buried in her hometown of Fitzroy Crossing. But Philinka was not someone without capacity, without bright hope for the future. Philinka had just graduated from a Melbourne boarding school.

“Our people need ‘resilience’ to cope with racism. We need resilience to deal with how we are looked at, viewed, treated, and not just by governments who are in the end responsible for the racism, but also we need resilience in our daily ordeals with ordinary people.”

“Our people are under attack every day.”

“How much focus on the colour of our skin or on our identity can we deal with and stay resilient? It takes a toll on us to be made to feel different, to be made unequal and to be treated like we are shit.”

Phillinka was born in October 1996, but a couple of weeks after turning 18, Phillinka would take her life.

Phillinka’s brother was in a Perth prison. I have supported him too. He is no longer incarcerated. “It broke our hearts, the decision to not let my son attend his sister’s funeral devastated us.”

“He had been a victim of sexual abuse in prison.”

“It is bullshit, just bullshit.”

“How much can our people endure?”

“On top of this, the Coroner’s office did not return my daughter’s clothing which we did want returned. They destroyed it. They claimed it was contaminated. That’s just more bullshit.”

“My beautiful daughter is gone. We did everything that we could. Her graduation day at Wesley College (Melbourne) feels like yesterday.”

It is only at the request of Philinka’s mother’s that we have published the photo of Phillinka and of her name. Phillinka’s mother, Lena, is urging for much to change for all her people, and that her daughter’s passing brings on the journey to the changes that would have made a difference to Phillinka and the many others who we should not have lost.