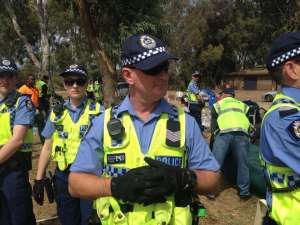 The calendar event of Homeless Week will recycle itself in August and the Lord Mayor of the City of Perth will cut the red ribbon in Forrest Chase – in the heart of the CBD – and drop in a speech of how much more needs to be done for the homeless. Pretty rich for the City of Perth who do near next-to-nothing for the homeless. In fact some of us are of the view that they may do more damage than anything else. Recently, the City of Perth smashed a homeless friendly precinct, a safe space of 41 tents – moving on the homeless back to the congested alleyways, condemned squats, lonely outskirts of the city centre – exposing the homeless once again to not only the elements but vulnerable to all forms of violence.

Perth City Council should do a no show during Homeless Week as they have done an effective no show on responding to homelessness.

The conduct of the Council in their handling of the Matargarup homeless precinct appears a throwback to the 1940s. On Thursday scores of police in militia formation marched into Matargarup escorting scores of City of Perth workers led by their CEO, Gary Stevenson who was wearing a hard hat directing the show. It was a sad sight.

Police were unusually aggressive in their responses – six move on notices (I was one of them) and three arrests – two Aboriginal Elders – Yamatji Elder Julie Dwyer and Nyungah Elder Bella Bropho.

The police issued me with a move on notice for speaking up (loudly).

Where are the homeless supposed to go?

Back to where they came from – alleyways, city precinct squats, lonely parks, condemned squats – vulnerable to the elements and to various violence.

A few weeks ago, Producer of The Stringer, Jennifer Kaeshagen and I had met with the City of Perth CEO, Gary Stevenson at his office to discuss ways forward for Matargarup. I am a person of my word and promised to him that the half hour conversation would remain off the record. I keep my word.

When Mr Stevenson led the raid on the island on Thursday – the fourth such raid in 8 weeks – I said to him, “There is no honour here today Gary.”

“These are mostly homeless people Gary, where are they to go?”

“We should be discussing homeless friendly precincts and ways forward.”

Mr Stevenson responded, “We’ve been over all that.”

There should be homeless friendly precincts in every major hub in Perth.

Furthermore as this camp was established on Matargarup (Heirrison Island) by the Nyungah (Noongar/Bibbulmen) people it was ‘lawful’. Historically, Matargarup was a birthing site for the Nyungah/Noongar/Bibbulmen people and all around the birthing site there was camping, hunting and fishing and a meeting place. Under Western Australia’s Aboriginal Heritage Act, the Department of Aboriginal Affairs has Matargarup registered as a First Nations’ site for camping, fishing and hunting. Native Title law is supposed to override all other laws. One High Court appeal after another has upheld this intention.

Furthermore the Local Government Act, section 3.7 states, “A  local law made under this Act is inoperative to the extent that it is inconsistent with this Act or any other written law.”

Therefore Local Government by-laws are overridden by established Native Title rights and the State’s Aboriginal Heritage register. In fairness to others, such as Mr Stevenson, who has experience as a Native Title practitioner, he may believe otherwise.

A pro bono lawyer for the homeless – Fremantle based Barrister, Stephen Walker  – said, “That the campers are legally entitled to camp on Heirisson and it is unlawful for the campers to be moved on as Native Title overrides Local Government law.”

“It is my view that their possessions should not have been removed.”

“I would suggest that the police have no legal right to be involving themselves in this matter. I will be contacting the police about this,” said Mr Walker.

The police may have wrongfully involved themselves in supporting the local council action.

Obviously the Council has its legal counsel. In my view, both the City of Perth legal counsel and the campers’ legal representative Stephen Walker should seek a ruling from the Supreme Court, unless they can sit down and discuss the issues with the best intentions, not with either party seeking to dominate.

I wrote to the Lord Mayor, “It is an unbelievable statement to be making to anyone that the City of Perth has found ‘housing’ for the ‘genuine’ homeless at Heirisson.”

“It is not just factually inaccurate but an untrue statement that your Council has by any means substantively assisted any of the homeless families or individuals into any housing or transitional accommodation.”

“You stated that you can ‘attest’ to their transition into ‘housing’. I do not understand how you have formed this belief.”

“One of the families your Council raided on the island on Thursday was of a chronically homeless mother and her four daughters. How do I know they are homeless? I have been assisting them for a year.”

I asked the Lord Mayor if I could meet with her and the Councillors to discuss the possibility of homeless friendly precincts. I have been working with the homeless for many years and Jennifer Kaeshagen and I have secured accommodation for homeless families and individuals. Jennifer also coordinates the First Nations Homelessness Project.

I stated to the Lord Mayor, “You could lead the way with such a precinct.”

“There is no greater legacy that one can have than to improve the lot of the most vulnerable, and indeed to save lives.”

To her credit, the Lord Mayor replied soon after receiving my email.

“The CEO has been working tirelessly on approaching the Heirisson Island issue responsibly. The poor word choice is now corrected – we apologise – so let’s agree we are all doing the best we can under testing circumstances.”

I really do not comprehend that people can miss who is actually under the testing circumstances – the homeless.

The Lord Mayor continued, “The CEO is now copied in and any reply further as it is under his operational control, not the Council’s where this matter is concerned.”

I responded that the discussing of homelessness and a homeless friendly precinct that in my view it is a matter for the Councillors.

“Such a preliminary meeting can inform whether yourself and your fellow Councillors would consider further discussion and research and hence any proposals on these issues.”

“This is all I am asking for.”

On reflection I realised it was a waste of time. I reminded myself of the Council’s position on ‘begging’ in the city and the by-laws it pushed through – an 8:1 vote. The single vote against the by-law was by Councillor Reece Harley. I have not seen Mr Harley in years however he was one of the Guild Presidents at Murdoch University during the period I was the Murdoch University Guild General Manager. Of course Mr Harley would be opposed to the anti-begging policy as he was involved with Swags for the Homeless. I am also aware of his ongoing work with the homeless particularly with the Salvation Army and of his calls for more to be done for the homeless and also for a much needed Aboriginal controlled homeless drop-in centre somewhere in East Perth. I am sure he continues trying to crack the hard wall that is the consciousness of the Perth City Council. But in the end he is a lone hand as the 8:1 vote demonstrates.

My next port of call is Member for Perth, Eleni Evangel. Ms Evangel, is working to put a task force together to respond to homelessness issues in the city and greater city precincts.

In the meantime our most disadvantaged are being smashed from all quarters.

Some police officers involved in the raid have confided in myself and in Ms Kaeshagen that they had no choice, that they did not want to do what they did but that “as long as we wear this badge we have to do what we’re told”.

I understand this but I do not accept this. You are who are you are 24/7, not just part of the time. I sit on Government boards but also stand uncompromised at all times whether at Government levels or at the coalface. Unless we lead strongly on issues we delve into the dangerous belief that incremental change will make a difference, where indeed instead the divides widen.

One police officer said, “I didn’t like what happened today. We don’t want to move on the homeless but we have no choice. Many of us try to help them.”

Another police officer said, “We got directions from above, what can we do?”

I do believe in conscientious objection. I live it.

A police officer said, “If I did that, I’d be out of the job.

I do not wish anybody any ill. I would love us all to sit down together and discuss the ways forward. All of us; Mr Stevenson, Lord Mayor Scaffidi, the police, the State Government, the Matargarup homeless.

I will continue supporting the Matargarup refugee camp for the homeless. Who does the City of Perth Council think they are ‘stealing’ the tents from the homeless?

– Declaration of impartiality conflict of interest – Gerry Georgatos, the writer of this article, and Jennifer Kaeshagen, producer and editor of The Stringer have been supporting the Matargarup refugee camp for the homeless. They have both met with Mr  Stevenson to discuss the ways forward for the Matargarup camp. Both are heavily involved in homelessness issues.

City of Perth goes after the beggars

ABC coverage of the raid on Matargarup

SBS coverage of the raid on Matargarup