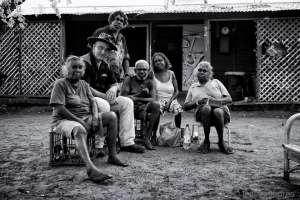 The Overcoming Indigenous Disadvantage report, despite some positive trends found what most of us know, that for the marginalised and vulnerable nothing has got better and for far too many has got dangerously worse. Acute poverty indicators such as access to water, sewerage and electricity have regressed – 3rd world akin-conditions in the world’s 12th largest economy. Suicide and self-harm rates are increasing and trigger untold community distress. All the while, Governments are failing to fund adequate water and sewerage supply and they are failing to fully fund suicide prevention and community development programs and services.

The report found that the proportion of adults reporting high levels of psychological distress increased from 27 per cent in 2004-05 to 30 per cent in 2012-13, and hospitalisations for intentional self-harm increased by 48 per cent over this period. During this same period the rate of self-harm for non-Aboriginal Australians remained stable. The report follows soon after extensive media coverage of child suicides in Western Australia. Recently, in a mid-west town, an 11 year old Aboriginal and/or Torres Strait Islander boy took his life. Soon after a 14 year old boy in a southwest town was another tragedy. North to the Kimberley, only a month before these two tragedies, a 13 year old girl lost her life to suicide.  Recently, the Aboriginal and/or Torres Strait Islander Suicide Prevention Evaluation Program (ATSISPEP) disaggregated rates of suicide and found the Kimberley to have the nation’s highest rate, more than 70 suicides per 100,000 Aboriginal and/or Torres Strait Islander population.

The suicide death rate for Aboriginal and/or Torres Strait Islanders in 2008 to 2012 was almost twice the rate for non-Aboriginal Australians. But once again, if we disaggregate we find regionally throughout Australia higher rates of suicide and self-harm among Aboriginal and/or Torres Strait Islander peoples. These regions have higher levels of homelessness, overcrowding, acute poverty, arrests and imprisonment rates than the overall national rates.

The Overcoming Disadvantage Report reported that the Aboriginal and Torres Strait Islander imprisonment rate increased by 57 per cent between 2000 and 2013. Aboriginal youth are incarcerated at 24 times the rate of non-Indigenous youth.

The Overcoming Indigenous Disadvantage report highlighted some of the intertwined factors that can determine social and health outcomes but in the end, Governments are not providing the adequate funding, and ensuring it hits the ground, for all the determinants to ensure a bona fide closing of gaps.

According to the Overcoming Indigenous Disadvantage Report, in 2012, almost one-third of Aboriginal and/or Torres Strait Islander adults reported high levels of psychological distress, an increase from 27 per cent in 2004-05. This was almost three times the rate of non-Aboriginal Australians.

The Report did state that there have been some improvements in health, education and economic outcomes. However, results in areas such as justice and mental health continue to get worse. Overall, economic outcomes include higher incomes and lower reliance on income support, increased home ownership and higher rates of full time employment. Rates of disability and chronic disease remain high. In 1980, trachoma, a disease effectively wiped out in most of the developed world, was five times more likely among Aboriginal and/or Torres Strait Islanders compared to non-Aboriginal Australians. Instead of the rate declining, in 2014 it is now six times more likely that Aboriginal and/or Torres Strait Islanders will contract trachoma.

The chairperson of the Productivity Commission and of the Steering Committee said, “It has been almost three years since the last OID report. For this report we made a concerted effort to increase the involvement of Aboriginal and Torres Strait Islander Australians. Their input contributed to significant developments, including broadening the focus from overcoming disadvantage to improving wellbeing, and the inclusion of new indicators, such as Indigenous language revitalisation and maintenance, valuing Indigenous cultures –including experiences of racism and discrimination – and participation in decision-making.”

The convener of the expert working group that advised on the report was Commissioner Patricia Scott. This report is the sixth in the series, which traces its origin to the final report of the Council for Aboriginal Reconciliation in 2000.

Kimberley suicide rate, one of the world’s highest – Yiriman is the way to go

My Country but look how I am forced to live

Leave a Reply to Virginia Adams