Not always and only broken: some responses to Roger Cohen’s New York Times article 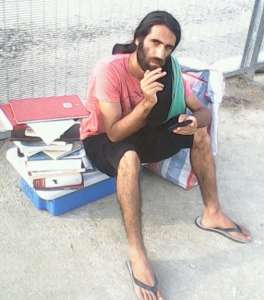 – by Janet Galbraith with Behrouz Boochani

“I don’t want to be written as a broken man”, says Behrouz Boochani, Kurdish journalist and writer incarcerated in Australia’s immigration prison camp in Papua New Guinea, after reading Roger Cohen’s ‘Broken Men in Paradise’ published December 9, 2016 in The New York Times.  “I have punched the Australian government with my words for three years.  A broken man does not do that”.

Cohen’s article powerfully reveals and situates some of the ‘sinister’ cruel and diminishing effects of Australia’s so-called offshore processing centre or ‘island prison’ on Los Negros Island, in Manus Province, Papua New Guinea. Simultaneously the article has presented some more nuanced questions around identity and representation.

A politics of representation was and remains key to the initial development and now maintenance of the three island prisons – Nauru, Manus, Christmas Island – and the wider immigration detention industry in Australia.  What stories are told, how they are told and by whom, has been a determining factor.

‘We were told:  “There are many deadly diseases and the local people are cannibals.  They are dangerous. Do not go near them”, say Aziz, a Sudanese man with refugee status.

Paru, a Manusian man reports; ’We were told;  “These people are dangerous criminals.  They are different to the first lot you had here.  They are terrorists. Don’t go near them”’.

Such stories have effected division and fear between Manusian people and those incarcerated in Australia’s prison camp on Manus, and diminished a sense of self as each individual is reduced to cannibal or terrorist whilst the ‘civilising’ status of Australia is shored up.

Amir writes, ’Do you know how it feels to be hated by the most well known people in the world’, people who have signed the Refugee Convention. ‘In this prison it is easy to lose your personality’, writes Boochani.  ‘In Australia many people do not see us as having different and developed personalities.  We become simply refugees, for some we are illegals, terrorists, criminals, for others we are poor refugee, child-like’.

The narrative of Cohen’s article is driven by a narrative of ‘broken men’.  For some this has reaffirmed the experience of being defined solely as ‘refugee’.  Although Boochani says he can see that this has potential to be effective, he was distressed by the way in which he was written.  Having spent years reporting on what is happening in the prison camp, he was excited to be meeting with a fellow journalist, a colleague.  However, on reading Cohen’s article he was disappointed to find that he had been slotted into the ‘broken men’ narrative even as he had explicitly asked that the information he holds and his release of tears not be reported publicly. These were private moments shared between two men.  Boochani says, ‘they can only see the word refugee.  How can they change the thinking when that is all they can see’?

A young man from Somalia who has been recognised as a refugee tells Galbraith of his time working as a professional community development worker and how his professional identity has been a huge part of his sense of self, of how it determines how people back home know him.  He says that whilst in the prison camp he has stopped speaking with his former colleagues as he does not want to feel less than what and who he was.  After speaking he tells me he has momentarily remembered the ‘fullness of [his] identity’. This man is in Port Moresby as a result of serious illness caused by the conditions of the Manus prison camp but he is not reduced to this.  He is sick, he is tired but he is not always and only broken.

Aziz says to us, ‘Whatever the time we spent with The New York Times was, and there were good things that came from it, the problem is people now see two words about us:  “broken men” . These words are not valuing what we have been doing and the fight we have fought for more than 3 years now. We have been resisting every day and now we feel really embarrassed’.  As Aziz attests, it is very important for some of the men interred that their active resistance to the tortures perpetrated against them is recognised and that they themselves are recognised as activists, as writers, journalists, artists, athletes, community development workers – as more than refugee, as more than broken.

In saying this I do not want to deny the truth of the profound damage that years of incarceration in the prison camp effects.  The design of these prisons is to break people.  We know this.  We know too that these aims have not been wholly achieved.

‘My crying was an outburst of power.  It was not weakness.  Yes sometimes I am scared.  I am tired.  I am running a marathon, but I am not broken.  I am a journalist, I am a writer, I am a prisoner.  The history of this prison is written in my hand … I am here with only a phone and my tongue and say,  “I am more than you know.  You [Australian government]  made a mistake exiling a journalist to this prison and keeping him as hostage.  Writing is my mission, my work, it is me.  I write through those tears and document thousands of Australia’s crimes’, writes Boochani.

Representations of people who have become refugees as illiterate, criminal, terrorist, broken, child-like…  circle through many of the stories told of Australia’s prison camp on Manus.  In telling stories of people there is both the capacity to diminish and the capacity to grow power. The danger of representing the men incarcerated on Manus as broken is that the more nuanced truths of life and self are lost, the danger is that the men are reduced to being beaten and their persistent acts of resistance, their ongoing intelligent and determined work, their own creative self is erased.