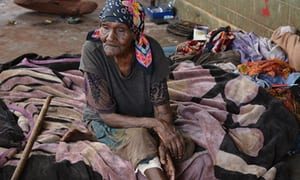 I write this article while in the Northern Territory, a region with a total population of less than a quarter million, of who nearly one-third are Aboriginal and Torres Strait Islanders. But with a heavy slap of apartheid the divide between Black and White in the Territory tormentingly languishes.

The national media fails to take to household Australians the disgrace of apartheid Australia – of the hundreds of shanty towns, dustbowls, corrals. This disgrace is rarely reported; the vistas of shanty dwellings I have seen in one community after another should abominate Australians. Many communities are denied piped clean water, denied basic infrastructure, denied the bastions of institutions – including quality schools – which the rest of Australia enjoy as elementary rights.

Every government department I have visited in the Territory, its personnel are a sea of White privilege. Every private sector enterprise I have visited is a sea of White privilege. There is no one-third of the workforce comprised of Aboriginal Territorians. This was the case two and three decades ago. It is obvious that the work of yesteryear in touting affirmative actions, the goal of workforce parity, was a lie.

Today the Northern Territory remains to Australia what Mississippi, Alabama and North and South Carolina were to the United States decades ago.

The Close the Gap education target is a national target but if that target was disaggregated to the Northern Territory you’d find that the majority of Aboriginal children are not completing Year 12. In fact the majority are not in school. The majority of the Territory’s regional towns and remote communities have only a sliver of the children attending school. A significant proportion of communities have not had a secondary school graduate in years. The majority of these communities are third-world-akin. If you imagine the apartheid can’t get worse well then visit the town camps, whether of those orbiting Alice Springs, Katherine, Tennant Creek, etc. They are the worst of Australia’s toxic apartheid. The town camps are a custodial experience, where all hope is denied, where people finish worse off by each day’s end. Apartheid is not a strong enough word. Racism is not a strong enough description.

The solution is sort quickly the social determinants, bring on the equality because the rest is chatter, actually better stated as crap, insufferable lies. What governments have been doing, the neglect of Aboriginal communities, is attrition – death by a thousand cuts. It is obvious that they want many of these communities to die out, and at least to this diabolical end governments can silently believe they are ‘winning’, achieving the goal. The painful tragedy includes children removed, children suiciding. Let us look at why all this is happening instead of dissing on people for turning to the booze and aberrant behaviour. Don’t blame the downtrodden for sinking in drink. Blame those who walk all over them.

If what is happening is not called out for what it is then we too will be damned by the future as racists and criminals just as we damn those of past generations who locked in the apartheid, who segregated, who brought on the stolen generations, one abomination after another.

The Northern Territory is a horrible home to its 14,000 Aboriginal children. Nearly 1,000 of the 14,000 have been removed from their families by the Territory government’s child protection mob – that’s one in 14. More than eight and a half-thousand of the Territory’s 14,000 Aboriginal children have been subjected to child protection notifications. Instead of the Territory government improving the lot, improving the life circumstances of long impoverished peoples it harasses them to accept miserable existences. The Territory’s privileged say to the impoverished, to the marginalised, to the downtrodden “adjust your behaviour” despite that we keep you downtrodden. They tell them to get “resilient”, but how far and for how long can someone adjust their behaviour when resilience is standalone and there is no coupling opportunity and the hopes availed to every other Australian? I have quite clearly described here the oppressor and the oppressed.

It’s about bloody poverty, and of the worst kind; all the rest is disgraceful chatter.

So the Territory and Commonwealth governments have the choice all their predecessors have had, to bring on equality or to remain steadfastly morally and politically reprehensible and remain racists and oppressors.