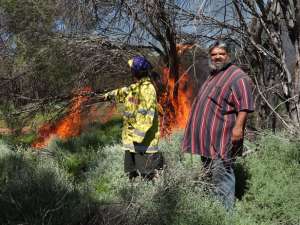 In Norseman, Western Australia, the Ngadju kala Ngadju report on fire knowledge and contemporary fire management was launched today by Ngadju Conservation. The report is the work of the Ngadju community, the CSIRO and the Goldfields Land and Sea Council. It was supported by the State Government Departments of Parks and Wildlife.

The report documents the Ngadju people’s understand of local ecosystems and fire regimes and highlights how they would like to contribute to contemporary fire management in the region. Ngadju Country is of particular significance as it covers a large part of the 16 million hectares of the Great Western Woodlands – the largest remaining area of intact Mediterranean climate woodland on Earth. The area is recognised as globally unique in that nowhere else do tall woodlands occur at as little as 250 mm mean annual rainfall, therefore making fire management in the region important and challenging.

The report can be found here:

Some of the findings of the report were that the extensive old growth woodlands were rarely burned deliberately, because they take hundreds of years to recover. The extensive sand plain shrub lands were occasionally burned with planned fire. Mostly they burnt naturally by wildfires that were allowed to take their course. Rather, Ngadju used fire as a cultural tool for keeping the Country clear around rock holes, for encouraging grasses in open grasslands and mallee, and to smoke out animals when hunting. These fires were often small, around one hectare.

“Ngadju used fire as a cultural tool for looking after rock holes and grassy areas, for protecting important cultural sites and special plants such as water trees, for access and hunting, and for encouraging grasses. The old growth woodlands were rarely burnt deliberately,” said Mr Schulz.

Ngadju used fire to protect important cultural sites and special plants such as water trees, and to maintain access along walking tracks and in coastal shrub lands. Other activities such as firewood collecting around the edges of woodlands and rock holes, and sweeping and scraping up litter around individual trees, were undertaken to help control wildfire. Ultimately, these activities would have led to a fine scale fire mosaic over the top of the natural vegetation mosaic.

The documented knowledge will enhance Ngadju opportunities to be and work on Country, and inform ecological management of the Great Western Woodlands.

“Today is a milestone for Traditional and contemporary healthy country action planning in Ngadju Country. Our aim is that our children can come out of school and train as fire and biodiversity experts on their own Country,” said Mr Schulz.

“We welcome and thank your partners for many years of contribution towards Ngadju empowerment.”

CSIRO research scientist, Dr Suzanne Prober described the report as an opportunity for improving “knowledge and aspirations around fire management.”

“I feel very privileged to have worked with the Ngadju community.”

“Contrary to common assumptions around Aboriginal burning in Australia, Ngadju people told us they did not regularly burn the majority of their Country. Rather, they used fire to carefully manage specific parts of the landscape,” said Dr Parker.

In 2009, the Federal Court spent a week at sites around Norseman and Balladonia, hearing evidence from the local Ngadju people about their connection to Country in reference to their native title claim. The Ngadju claim extended from Caiguna in the east, west across to Ballodonia, Norseman and north to Widgiemooltha and the Transline, covering over 100,000 square kilometres. The claim for native title was lodged in the Federal Court in 1995 and it took 14 years for the Court to convene to hear the community’s evidence.