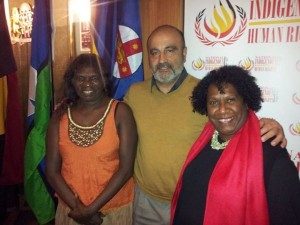 The National Indigenous Human Rights Awards are nearing – the second of these annual awards. What separates these awards from others is that they are Aboriginal and Torres Strait Islander awards only. They were long overdue and last year’s inaugural awards night went off big time in recognising exclusively the most profound human struggle on this continent – the First Peoples rights struggle.

The inaugural recipients of the awards were Arrernte Elder Rosalie Kunoth-Monks who took out the Human Rights Achievement Award, posthumously Arthur and Leila Murray were the recipients of the Social Justice Award, and the Courage Award was taken out by Gamilaroy woman Barbara McGrady.

“For the first time in my life I am left speechless, in tears,” said Ms Kunoth-Monks in accepting her award.

“These awards are the most important yet because they are for our people, by our people in every layer.”

During her speech Ms Kunoth-Monks resonated with the keynote speech presented by Yalmay Yunupingu who criticised Governments and who opposed assimilationist policies and imposts. “We are our own people, we are rich as the people we are, we have our languages and our first language is not English.”

“My granddaughters have a right to be taught their first language in our schools.”

Deputy Leader of the NSW Opposition, Wiradjuri woman Linda Burney Welcomed everyone to Country and was the Master of Ceremonies. Ms Burney said that the Awards were “long overdue” and that they were the birth of a significant legacy.

“The rights struggle is ongoing.”

The event attracted a multiparty political presence and distinguished guests from around the nation – champion rights campaigners and advocates from all spheres of influence, from the coalfaces to the highest offices in the nation.

Yolngu Elder, multilingual speaker and primary school teacher, Ms Yunupingu delivered a powerful keynote speech which included insightful criticisms of Government policies, describing them as assimilationist and neglectful. Ms Yunupingu said that many regions should have their existing first languages as their dominant language and schools should be taught in both first languages and English.

“Our people are not brainless and dumb – we are capable of running our own communities, managing our own lives, of teaching our children.”

“Policy, policy, policy, changes, changes, more changes – are we going to keep on living like this and continue to be used as a Trojan Horse by new Governments who come with new policies, bang. New jobs are created, bang. People put in positions and jobs they do not understand or have any idea how to do and then they are criticised.”

“Our bush schools are criticised and (the Department of Education) say our teachers are inexperienced and unskilled to run bilingual education. But they are skilled in their languages.”

Ms Yunupingu said that equality and great justices cannot be achieved while Governments do not recognise the full suite of natural rights, the normative of identity and culture and the right to happiness of remote and regional peoples.

Champion athlete Anthony Mundine touched the audience with reflections of his own life and of those around him who he knew their paths would endure destructive impacts. “I was 14 years old when I made decisions.” He said he was with his mates who he described as “brothers and sisters” and he reflected on the occasion that drugs were part of the cultural impoverishments. “We were walking around Woolloomooloo, when they wanted me to try stuff and I walked from them.”

“I have never done drugs, never drank alcohol, never smoked in my life, and I never will.”

Mr Mundine is a role model to those around him and despite whatever words the mainstream press chooses to focus on from Anthony Mundine, what they should do is focus on the words he spoke about his life to the audience of the inaugural National Indigenous Human Rights Awards. Mr Mundine’s legacy is a strong one – that will live into the ages, however he has the capacity for an even larger legacy because of his rich connection with youth; a legacy that can touch tens of thousands of lives.

The Mabo Social Justice Award was presented to Anna Murray, daughter of posthumous recipients, Arthur and Leila Murray in recognition of their rights work over five decades in northeast NSW. They fought for wages equality for their people who were being exploited on farms and in factories, but particularly as cotton pickers. Then in 1981, they endured the tragic loss of their 21-year-old son, Eddie, in the local Wee Waa police lockup. Eddie’s death was one of the tragedies that launched the Royal Commission into Aboriginal Deaths in Custody.

The Courage Award was awarded to Ms McGrady for her photography and documenting of the Aboriginal rights struggle over four decades. Ms McGrady’s work was been recognised nationally and internationally and she is known to have been at every significant First Peoples event.

To nominate someone for this year’s Awards, someone whom you consider worthy go here. THE NATIONAL INDIGENOUS HUMAN RIGHTS AWARDS 2015