My Country – but look how I am forced to live 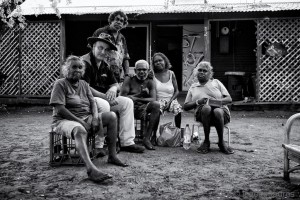 What the Prime Minister is yet to do despite the year-long-promises; the listening to people. Gerry Georgatos at One Mile Community, listening to what the residents have to say. They deserve better than the apartheid they languish within – Photo, Ingetje Tadros

One Mile Community reminds me of South Africa’s town camps, where people were, and many still are, corralled in acute poverty. The apartheid-like, third-world-akin One Mile Community is only one mile from the town centre of Broome. The contrast between this shanty town and the predominance of tourist mecca Broome is disturbing. There is no place for such racism in this country but in fact it is all too common. In particular, the two wealthiest regions on this continent, Western Australia and the Northern Territory are littered with these deplorable corrals.

Right minded people can see from whatever lens they are looking through that this is a racialised issue, that these corrals, these shanty towns, these official and unofficial camps are the product of Australia’s historical racism, apartheid and eugenics. That they continue on the landscape of the world’s 12th largest economy, 2nd wealthiest nation per capita, in the two richest regions of the nation with both 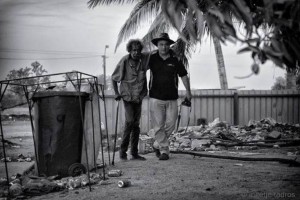 This gentleman was sitting alone for hours out the front of One Mile Community because he cannot walk without assistance – Photo, Ingetje Tadros

boasting the world’s highest median wages indicts Commonwealth, State and Territory Governments. There is racism burning in this country, not just neglect, not just the bent for assimilation, but racism burning brimstone hot.

Last week, I spent my nights sleeping on the soft earth of Jalmardangah, a remote community 350 kilometres north of Broome. Jalmardangah hosted the 3rd annual Kimberley Aboriginal Land and Cultural Festival. More than two and half thousand people came through, the communities poured in from around all over the Kimberley region, particularly from the west Kimberley – 32 language groups and five cultural blocks. The coalescing of people was a beautiful experience. Instead of the bullshit tour by Prime Minister Tony Abbott alongside his bullshit club and that coterie of troubadours, the Indigenous Advisory Council, prancing around courtly love but to date, nearly one year into their crap, delivering nothing whatsoever to First Peoples, they should have all rocked up to this festival. The pluralities present would have better informed Prime Minister Abbott if he had been at all serious of ‘living a week’ in a remote community of diverse needs, the unmet needs, of First 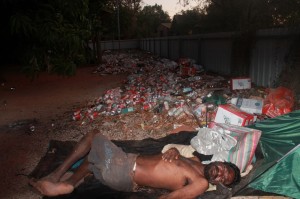 This gentleman was not inebriated. He had been without food for days, so I went back into town and bought him something to eat. The pile up of beer cans in the background should not be used as some righteous argument by others to judge but rather should be understood in terms of the ongoing neglect of many of these people – the forgotten people – Photo, Gerry Georgatos

Peoples. But instead we were pummelled with the scripted garbage polluting the news from his so-called northeast Arnhem Land visit. For the record, many from the community that Prime Minister Abbott and his court jesters visited were very disappointed by the lack of the integrity of the visit – anyway, enough written on the charade.

While I was at Jalmardangah, I mixed it with many, from many communities and I listened to what they had to say. At night we sat by campfires, during the day under shady trees. Some of them came from shanty towns and third-world-akin existences. They invited me to their communities, some of which I have already visited. I will be heading to these communities in both the west and east Kimberley – I keep my word. Once back in Broome on the weekend I once again visited One Mile Community. I had been there before, and most recently alongside Broome-based international photojournalist, Ingetje Tadros who is working on a voluminous photographic narrative of the community. Ms Tadros is a regular visitor to the community, bringing food and essentials and driving around many of the residents. Ms Tadros has been doing this for the ten years that she has lived in tourist mecca Broome.

I went back to One Mile Community, because I promised some of its residents that I met at Jalmardangah that I would. I sat on a crate and listened to the hopes and 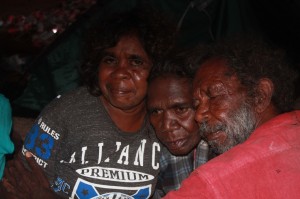 There is a lot of love among the people, despite the anguish of extreme poverty, despite the various despair – Photo, Gerry Georgatos

dreams for the next generation of the community’s residents despite One Mile being a hovel of misery. But what stood out for me was the love that couples had for one another, the affection, and the camaraderie with most of the community.

The veils and layers of racism are many. Australia is yet to cast aside its racism. One Mile Community is the product of the ugliest forms of racism. I have spent my working and academic life in unveiling racism, in describing its layers, not to pointlessly blame anyone, not to keep us hostage to divides but indeed to move to the ways forward. It is time for all of Australia to understand that there is racism burning all over this continent, and it punishes us with underclasses of impoverishment, it punishes people, it denies us the plurality of who we are and who we should be. It is time for One Mile Community to shine bright and not to dampen the soul.

We were not put on this earth to betray one another.

The people of One Mile Community, one of hundreds of such shanty towns around this nation have indeed been betrayed. 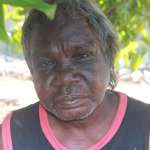 William said that he does not believe that any Government will ever care about One Mile Community – Photo, Gerry Georgatos 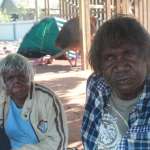 Martin, alongside his partner, said, “We are the forgotten people” – Photo, Gerry Georgatos 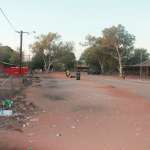 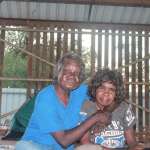 There is a lot of love but little coming from our Governments – Photo, Gerry Georgatos 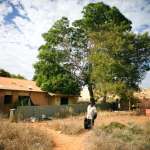 Kennedy Hill – another nearby Broome shanty-district but half of it has been demolished and as per usual with no contingency plan for the former residents. Many had lived at Kennedy Hill for 30 years – Photo, Ingetje Tadros 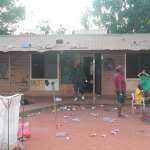 Perth is no better for many First Peoples – a family of six children, aged four years to 16 years old, their father and mother, had to live in tents in the bush for more than six months off a major Perth highway. Every Government agency knew they were homeless but could not do jack for them. Ultimately, I found them interim accommodation – Photo, Gerry Georgatos 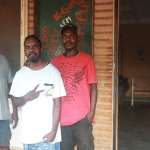 All the homes at One Mile Community look pretty much like this. This is not apartheid South Africa, it is Australia, today – Photo, Gerry Georgatos 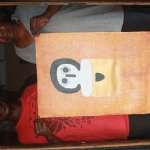 The painting by Douglas is of a Wadjina, in images of Wadjinas, they have no mouths, so they cast no words and pass no judgements – Photo, Gerry Georgatos 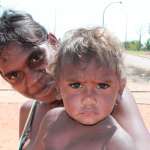 This one-year-old bub and his 20-year-old mum who live near One Mile at Kennedy Hill deserve better, much better, but Australia continues to deny them their Country – Photo, Gerry Georgatos