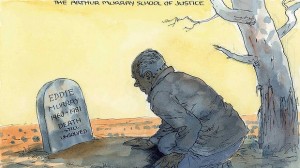 It is 33 years since what was the obvious killing of 21-year old Eddie Murray in a northern NSW police lockup and still there is a long way to go to even the flicker of justice. Last week, several of Eddie’s sisters and a couple of staunch supporters finally met with the NSW Attorney-General, Brad Hazzard to discuss the death of Eddie and their call for the reopening of a full blown investigation.

“My brother was killed in that police cell,” said Anna Murray, the last family member to see Eddie alive.

Mr Jackson said he reiterated to Mr Hazzard that it was not true that Eddie Murray took his own life.

“He was found dead allegedly by his own hand according to police one hour after detainment in the police cell. However the coroner made an alternate finding,” said Mr Jackson.

“The coroner found that Eddie was far too intoxicated to have hung himself and instead of concluding outright that a police officer had a hand in his death beat around the bush with the finding that Eddie died ‘at the hand or hands of persons unknown.’”

Mr Jackson said this finding is a cheap copout and “should not be allowed to stand.”

“It is obvious the only people with access to Eddie while he was in a police cell were the police.”

Nearly two decades later, an examination of the exhumed body of Eddie found multiple injuries, including a broken sternum.

Ms Anna Murray read out a heart wrenching statement to Mr Hazzard about the loss of her brother and the impact that it has had on the family ever since.

Their father Arthur and their mother Leila went to their graves having the justice they chased denied them. Eddie Murray was killed in the Wee Waa police cell, a small community town near Brewarinna – a region with a long and tortuous history of racism and racial divides. The grief of the family’s loss, compounded by a long struggle for justice, has never left. It should never have been this way.

Mr Jackson said, “We are hoping that somewhere along the line that we are going to get some justice for the family of Eddie Murray. The coroner found that Eddie died in a police cell to persons unknown. The only people who could have been responsible were the police.”

The Murrays had 12 children, nine daughters and three sons. Nine of the children remain, and continue torn with grief and distraught by the obscene silence of the NSW Police and the Police Integrity Commission and thus far gutless governments.

“The truth is that we as a family need the truth, we cannot rest nor can our mother and father rest in peace till we have the truth of what happened to our brother made public,” said Ms Anna Murray.

“In less than 50 minutes after he was apprehended by police, he was dead in that police cell.”

“The police officers say he hanged himself.”

“But no one else saw this, the ambulance officer who attended the cell, who I spoke to said that he did not see this.”

International journalist and filmmaker John Pilger, over a 25 year period, sustained coverage of the tragedy that befell the family of Arthur and Leila. You would imagine that with books written, films made, with parliamentarians such as Senator Lee Rhiannon and NSW parliamentarian David Shoebridge calling for inquiries that governments would act.

Mr Jackson said that the family presented Mr Hazzard with an encyclopaedic catalogue of information on their brother’s death and “the corruption around it all”.

“They put in a strong case, a very strong request that the Attorney-General once he considers the information, the facts, the evidence that he proceed to reopen the case.”

“The Attorney-General commented on the potential obstacles, the period that had elapsed since Eddie’s death, 33 years, and that potential witnesses and police officers had since died. But he said that he would read what was presented to him and respond.”

If Mr Hazzard is concerned about time lapsed, then he should act now and reopen the case and call for a full-blown inquiry before it is forever too late.