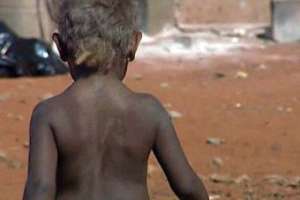 More than 150,000 of Australia’s Aboriginal people languish in acute poverty, a majority of them in impoverishment not dissimilar to third-world conditions. Who is to blame but our governments, for Australia is the world’s 12th largest economy and per capita the second wealthiest nation. The governmental neglect has led to malnutrition in Aboriginal children, one in every four Aboriginal children.

The Early Childhood Nutrition and Anaemia Prevention Project has worked in six communities across the NT, WA and Queensland. They found nearly 90 per cent of Aboriginal children were anaemic for at least one spell during the ages six months to 2 years old. According to the World Health Organisation the rates among these clusters of Aboriginal children would concur as a severe at-risk problem but one that should not take place in a presumed developed nation.

Controlled health studies have found that these anaemic levels and in effect malnutrition can be significantly reduced with healthy intakes of fruit. But governments have not done the spend on something as simple as this. And for far too many who are impoverished buying fruit in remote communities is expensive.

To reduce this endemic problem some health workers distribute sachets of multi-micronutrient powders for parents to mix into solid foods for the children to eat. But despite benefits from this it is not an equivalent replacement to fruit. A senior lecturer at James Cook University, Dympna Leonard, who works in the field said that more needs to be done, and that good nutrition, fruit indeed, should be imperatives. “No supplement is every going to substitute for healthy food.”

“Poor nutrition among children reflects poor diet and health across the wider community as well as impacting on children’s health, iron deficiency, and anaemia – and these can have long lasting detrimental effects on children’s educational attainment.”

In an insightful observation Ms Leonard said to The Conversation, “What we are finding in these remote Indigenous communities is the end point of the loss of their land and loss of their Traditional food supply, meaning people now depend on what they can buy at their local food store, on a low income.”

For the low-income families in these communities which is the majority, healthy food is expensive while junk food is not.

Governments have the capacity to address all of this but they do not. In the Northern Territory the average life span of Aboriginal peoples, who are one-third of the total Territory population, is unbelievably 52 years of age, 30 years less than the national average.