Mirning Country – the whale people – at risk from Native Title 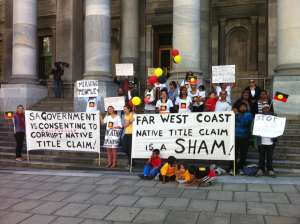 Mirning peoples protesting outside SA’s State Parliament after presenting their petition to save their Country to the Attorney-General, John Rau.

Six Traditional owner groups are tussling over a messy combined Native Title dispute on the far west coast of South Australia. One of the claimant groups, the Mirning peoples, are alleging that they were “railroaded by anthropologists and lawyers” into the combined claim which now “threatens to take our Country from us.” Thirty-five Mirning Elders presented South Australian Attorney-General John Rau a petition calling on the State Government to intervene.

According to Mirning Elder, Robbie Miller, the combined claim “disregards our traditional rights.” “The claim was put together by anthropologists and lawyers in a manner with which the Mirning do not agree with.”

“Furthermore not all the authorised claimant groups were included in the decision-making.” He said this therefore should make the combined claim invalid. However the Native Claim layers on behalf of the combined group disagree. He said he is frustrated because lawyers that acted for the Mirning now act for the combined claim group.

Mr Miller said much of Mirning Country is at risk of “being carved up and taken from under our feet.”

He said that anthropologists had combined the claimant groups by connecting them to Country, but he said some are from as far as the Western Desert and hence their connection to Mirning Country which is coastal is tenuous, as is Mirning connection to Desert Country. “The anthropologists have never shown us their evidence for connecting us, evidence they say they gathered from our Elders. Why would they not release this evidence to us? We have asked for this evidence again and again.”

“They have withheld it from us and only the State Government and the SA Native Title Services have it. We should be entitled to see it also, it is in the end about us, who we are, we are supposed to be.”

A lawyer for the combined claimant group said that as a result of intermarriages between the groups hence there have evolved multiple links to various Country. But Mr Miller said for him this is a tenuous argument, and “it is not rightful for anthropologists to tell us who we are – we know who we are!”

Mirning Elder Bunna Lawrie said that if the claim is not reversed it will unsettle the Nullarbor’s Traditional peoples. “The Mirning will lose forever the ownership of our lands and waters to the other five groups.”

Instead of whole claimant groups being involved in the decision making processes what has happened said the Elders is that only some families were involved.

The Mirning Elders are distressed by the combined voting power of the other groups, that they can be outvoted on issues relating to Mirning Country by the non-Mirning groups.

Mr Lawrie said the petition must be addressed by Government urgently or the Native Title agreement will “steamroll and railroad us out of Country and out of our traditional rights.”

“We need this claim enacted before the Native Title agreement is consented to by the Court.”

“What is happening to us, is something that happens to Aboriginal peoples all across the nation and it has to be seen for what it is, a human rights issue and an indictment of flawed processes.”

“We did not understand that the combined claim would water down the Mirning right to speak for our Country.”

The claim area is more than 83-thousand square kilometres. The claimant groups include Mirning, Wirangu, Maralinga Tjarutja, Yalata and Western Kokatha and include a family claim led by Elder Ted Roberts.

“The Native Title officials are ignoring us, “said Mr Miller. A Native Title community meeting is to be held in Ceduna, on Friday and Saturday, November 1 and 2. “Either the Attorney-General should stop it or we need to get all our people there.” This meeting will pretty much finalise the ILUA.”

“But what we have to say needs to be considered before any decision on any ILUA, and any anthropological evidence should be presented.”

Mr Lawrie said that if the Mirning are dismissed without a say then “50,000 years of custodianship of our Country will be dismissed, and we will have a cultural catastrophe for our children and their children.”

“We believe that the true history of our lands and its peoples must be considered.” He reiterated that the Western Desert people cross over into Western Australia and in South Australia they are Ceduna and Yalata based, while the Wirangu peoples are from the far north whereas Mirning are coastal peoples, “we are distant from each other.”

“They are drawing lines in the sand instead of listening to us, or they dump peoples into one heap.”

The Mirning people, who are mostly of the Great Australian Bight, still maintain their language – Ngandatha, and are known as the “people of the whale”. An initiative, “Project of the Whale” was founded in the 1990s to research the relationship between whales and the Great Australian Bight’s Aboriginal peoples, which led to a documentary film, “Eyes of the Soul” by Kim Kindersley and Julian Lennon in 1994 but which was never finished. However, the documentary, “Whaledreamers – The Gathering” was made in 2006. The Mirning and Kokatha peoples do share close ties and a long history of these ties – both are coastal peoples of the Bight.