Minister Marmion must be joking, “more support for outback communities” 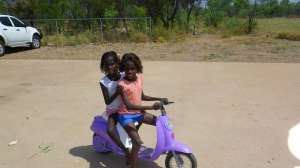 After several days of the Western Australia media soaking up a flurry of criticisms of Government neglect of remote communities, State Housing Minister, Bill Marmion produced an unbelievable press release reporting ‘support’ for outback communities, as if of a never-before-seen nature. Western Australian remote communities snuck into the media for a couple of days after a family of eight – including six school age children – left their remote community because the local school was closed down and drove 2,000 kilometres to Perth to secure “a good education for the kids”. They finished up homeless for more than five months but throughout which time the children went to school each day.

The story of a family living in tents on the outskirts of Perth, off a major highway, captured not only attention in the Western Australian media but thanks to the ABC, Channel 9 and NITV, also some attention nationally. The story trended highest in the nation for the ABC for several hours after they took it on. A social media campaign run by The Stringer seeking a home for the family went viral – the objective of housing the family was achieved with an offer of interim accommodation. The Stringer readers also donated money, food and clothes.

The media focused on the family leaving their community because the school had closed, and that nearby schools were of poor educational standards. Wongi Grandmother, Mary Meredith said “The Government and the Education Department have failed our communities. Our children are not learning at the same levels, to the same standards, that children are learning at schools in the big cities and towns. The remote schools are two and three years behind.”

Ms Meredith described that remote Aboriginal communities were deprived of the social wealth that other communities and towns enjoy because of unfair Government funding practices.

Perth talkback radio also heard of the State housing crisis, with 3,000 families – who are homeless or at-risk of homelessness – on the Department of Housing’s priority waiting list, for most of whom there is little likelihood of securing a home anytime soon. Western Australia has the worst homelessness rate in the nation, with half of it comprising First Peoples. Government promises of hostels and transitional accommodation have been broken. But for a couple of days the Western Australian public was exposed to both the fact of poor remote living conditions and to the homelessness and State Housing crises, issues which usually do not get a look-in.

And then instead of the Premier or a Minister responding to the crises we got from Minister Marmion the preposterous proposition that remote communities are being supported by the State and Federal Governments – and on the housing crisis, which is his portfolio, not a peep.

Western Australia has more First Peoples communities than anywhere else – $15 million is peanuts for 274 remote communities, long neglected and as a result languishing far behind the rest of regional Australia in what should be the basic tenement of “essential services.”

“The additional money for critical infrastructure will enable more secure water supplies, improvements in water quality and will ensure the safe supply of electricity and other essential services,” said the Housing Minister.

He touted as a positive the “$30 million per annum provided by the State to maintain power, water and wastewater services through the Remote Area Essential Services Programs.” At the same time from the lands that most of these remote communities stand neglected on because of the debacle that is Native Title, the resources extraction companies are becoming filthily wealthy, with profits in the hundreds of millions and billions of dollars each year.

Minister Marmion said that both the State and Commonwealth had “a shared responsibility to address the backlog of infrastructure needs in remote communities.”

“Ongoing funding from the Commonwealth is essential to address the significant challenges in achieving sustainable improvements in remote Aboriginal communities.”

The State Government’s commitment to remote community essential services in the Budget is $45 million. What a sad joke.