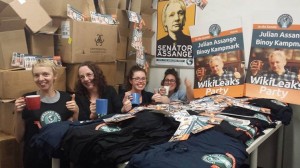 I am so impressed and proud of your hard work and the solidarity displayed by you all during this campaign. Now is the time to pull out all the stops, everyone together in the final push for votes…..manning the polling booths, getting the posters up and social media are going to make all the difference.

There are many victories to secure in this mission…..the victory of having our great candidates elected and the victories of being proud of our work and each other. The victory of securing more than 4% of the vote which will bring the party into a secure financial position for its ongoing work. The victory of drawing attention to the issues we believe in. The victory of building networks and ongoing relationships that we can use to defend our values and our people over the next 3 years and the victory of showing our numbers and strength of purpose.

Thank you. Now let’s get out there and win !

Spread word throughout Western Australia, Victoria, NSW for us – the WikiLeaks Candidates, Julian Assange, Kellie Tranter, Binoy Kampmark, Suresh Rajan Alison Broinowski and myself. We have relied on the spreading of the word, on people power. We do not have the resources to run the campaigns that others have, we do not have the funding to buy an equal share in respect to a say, we do not have a fair press to allow for an equality of comment, and we reject the support of interest groups who do not take collective humanity into account. The WikiLeaks Party is a never-before-seen, never-before-known shot at real democracy, for real independents in the Senate, who will also not tie themselves to each other,  except for the call for bona fide accountability and transparency in and of the Senate, who will insist that each piece of legislation is examined on its merit, standalone, with no deals behind-the-scenes, in caucuses or with special interest groups. We will ensure full disclosure, we will construct substantive public records for proposed legislation for ALL our parliamentarians to tap into, we will protect the public interest, we will chase the justice.

There are enough of all the other parties in the Senate, indeed far too much. We need to erode monopoly politics, we need to diversify the Senate. The Senate-only WikiLeaks Party seeks to be a check/balance in the Senate, on all legislation, seeks to break down the narrow hallway of  issues. We seek to broaden the issues, bring into the Senate unheard voices, untold narratives, the plethora of issues that have languished neglected far too long. We will bring on the truth, we will challenge without fear or favour. We will chase down the corruption; the corruption that pervades in so many veils and layers throughout Canberra and hence washes all society.

Please spread the word right throughout Western Australia, Victoria and NSW to vote in WikiLeaks Senators. We have long track records of social justice. We are not apparatchiks or party hacks, we have done the work and taken on the advocacy others don’t. As Julian says, we are predictable in this regard, and this is the check/balance in terms of our integrity and hence evidence of what we will be like in the Senate, that which we have always done. None of us have chased the so-called mighty dollar, this does not lure or drive us, we have spent our lives in social justice, human rights, in the striving for the common good.

If elected, I will also take into the Senate the voices of those who I have stood alongside for so long, done whatever I could wherever I could; our First Nations Peoples, those among our brothers and sisters who have been marginalised, I will bring their voices into the Senate. I know the solutions, because I have listened to their voices, understood their narratives. The solutions are easy but no-one is yet to articulate them in our Senate let alone stand up for them. I will stand up for the homeless and for our poor like no-one has before me. I will stand up for that which is right, that which is good, and I will let nothing stand in its way. I do not want two or three Senate terms, unlike others who want to hang on as if its their natural right or throne, I only ask for this one Senate term to do what I know can be done. I would not waste one single minute.

Please disregard hearsay and scuttle, please disregard what have been sad campaigns to undermine The WikiLeaks Party, please just forgive those who have missed sight of the imperatives and the big picture, please seek out only the evidence, the facts, our track records. Our Senators should be determined by long track records so we have the right people and our brightest minds in the Senate. Please seek out in your heart, soul, mind what we are about, the imperatives. Please remind yourself that Julian Assange has sacrificed for the common good, that he has now effectively been detained for more 1000 days without charge. Please remind yourself that WikiLeaks has stared down the CIA, Pentagon, lying Governments, horrific injustices, please remind yourself that WikiLeaks is still doing what it has always done; seven years strong despite covert operations, persecution, disinformation. Then reflect why the next step in the WikiLeaks movement must happen, The WikiLeaks Party. The world’s ears are listening, the world’s eyes are watching. People have flown to Australia to help us. On Saturday 7 you have the opportunity to vote in at least three WikiLeaks Senators, Julian Assange, Kellie Tranter, myself and hopefully Binoy Kampmark. If this were to happen, from next July the balance of power in this country on all controversial issues – where the major parties cannot agree – would be in the hands of real democracy, us – we will not compromise the public interest, democracy. And at all times we will chase into the Senate, justice, and chase out of the Senate, corruption.

Please share this far and wide, to everyone you know, ask them to consider voting WikiLeaks.