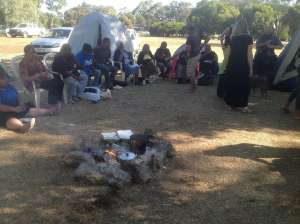 Homelessness is on the increase. Children – babies and toddlers – sleeping on Australia’s streets, in cars, in condemned squats and traps, in alleyways, in tents in bush outskirts off city highways or in caravan parks minus the caravan. Australia’s cities are harsh on the homeless; they have no homeless friendly precincts. Take one of Australia’s wealthiest cities – Perth – it is extraordinarily harsh on its poorest – the homeless. But in Perth, for 40 days now, a safe space for the poorest, a friendly precinct has been manufactured – Matargarup refugee camp

The camp has reached up to 51 tents and 150 people at any one time – the majority who are homeless. It is a much needed and long overdue safe space for the chronically homeless. There would be many more at the homeless camp but far too many of those who would wish to be within its safety have been scared back into the dangerous alleyways, squats and traps by three police led City of Perth Council raids. Their tents, swags, belongings taken and still in the possession of a ruthless City of Perth Council worried more about ‘wider public interest issues’ than the physical safety and mental, emotional well-being of the homeless.

But the Council has been hit with a letter of warning from a kind-hearted lawyer, Stephen Walker – who is acting pro bono – for the Matargarup homeless. Mr Walker has stated that he believes the homeless have a right to camp on the island and that it was illegal for the Council to steal their tents. I suggest the word steal because this is what I believe in effect they have done. They have taken from the homeless their protection from the elements, their dignity of a little space for themselves in this world, where they could lay their bones to rest, and locate their few possessions.

Matargarup camp is a place of camaraderie, psychosocial health, social and emotional well-being. It is a place the wider community is aware of and where health workers voluntarily visit to do medical checks on its ‘residents’, where ordinary citizens in droves drop off food parcels, essentials and spend some time yarning with the locals. It is a place where song, dance are present, a place of solidarity unlike the despicable life threatening loneliness of city alleyways where the sleepers are vulnerable to sexual attacks, violence, being rolled.

Have you any idea how many have died on our streets? But they get no mention in the media. On whose hands is their blood?

Perth City Council has the glorious opportunity to respond to those who have coalesced at Matargarup (Heirisson Island). They have the opportunity to assist the homeless instead of doing what Councils in predominately developed nations only do, and that is screw over the homeless, gather and shuffle them off, out of sight.

There are nearly 20,000 children under the age of 12 years homeless in Australia.

Perth City Council can be either visionaries or profoundly cruel.

There are nine councillors on the Perth City Council. It is up to them to decide the fate of the homeless of Matargarup. They cannot pass the buck to their executive. No deal here, whatever Perth Council does, those ultimately responsible are its councillors. It is up to them to decide whether Perth city should have a homeless friendly precinct. In my view there should be a homeless friendly precinct in every major hub in Perth, in every hub of every major city in Australia, in all the world’s cities, that is as long as Governments continue to refuse to address homelessness.

Matargarup is special, because it is led by our First Peoples – by those who have suffered most at the hands of horrific social policies, eugenics and other criminality for nearly two centuries in Western Australia.

I know just about every councillor on the Perth City Council. I hope that they have the visionary decency, the striving for the common good to do for our homeless what no others before them ever have. One of the councillors was one of my Guild Presidents at a university Guild where I was its General Manager. True, I was more political and radical than the students but he also volunteered with a group – Swags for the Homeless. He needs to stand up and be counted – he cannot deliver himself on the back of raising funds to buy swags for the homeless and then be part of a council that steals the tents, steals the dignity from the homeless. A few other councillors I know to be good souls but the actions of the council they are part of tarnishes their reputations – the reputation that matters – you know the one about where deeds speak volumes. At this time, the councillors represent and endorse a Council that raids the homeless, steals their tents and belongings, that moves on the homeless, that destroys their vestiges of dignity.

In the end, you are what you do. What you have to say does not mean anything as much as what you do or what you are part of. You cannot argue that you are ‘an internal voice’ or the ‘conscience’, that just doesn’t wash when you remain part of the wrongdoing.

As I have the inside word that another raid, once again police escorted, is on the table for next week, I will just state it as it is, if the Council shuts down once again Matargarup on the simple basis that it is a public park thoroughfare, excusing itself with by-law issues, then this council and its councillors are uncaring, mean spirited, lazy bureaucrats, cowards and ruthless.

So very few others use Matargarup (Heirrison Island), in general it is barely used by the wider public.

How many dead bodies have to be collected from the streets for someone in any form of government, local, State, Federal, to say ‘no more’?

But if the concillors rise to the occasion and welcome to Matargarup the homeless and assist them at every turn then I and many others will applaud their humanity, one that will be there for all to see.

Example is our only immortality.

There is no greater legacy that one can have in any form of government office than to have have improved the lot of the most vulnerable, to have saved lives.

Refugee camp thanks its founder with corroborree

Ruthless City of Sydney Council, ‘Who do you think you are stealing the tents of the homeless?’