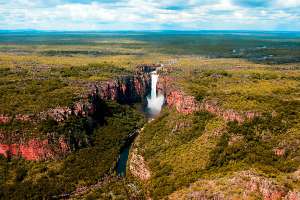 A million litres of radioactive slurry has contaminated Kakadu National Park from a burst tank at Ranger uranium mine. It is a significant toxic accident but it has surprisingly generated relatively minimal news coverage. It took the local Traditional Owners to break the news to Australia.

Gundjeihmi Aboriginal Corporation (GAC) CEO, Justin O’Brien, said the Ranger mine and its surrounds may be closed for at least two months in order to contain the leak. The GAC represent the native title interests of the Mirarr peoples.

On Saturday morning, 1am, a hole was found in one of the leach tanks. Up to a score of onsite personnel were evacuated, and it is believed that a little while later the tank collapsed.

Mr O’Brien said that “up to a million litres of radiological material in the form of an acid from a drum” caused nearby damage and poured into “stormwater drains.”

Mirarr Traditional Owners are disturbed by the contamination because it is the worst one yet. They have described it as the biggest “nuclear disaster in Australia ever.” Rio Tinto owned Energy Resources of Australia (ERA) is backing another project at the site, Ranger 3 Deeps but this latest contamination breach is a setback. Energy Resources Australia had agreed to proceed only with the project if it had the consent of the Mirrar peoples. But Mr O’Brien told AAP, “Day by day, litre by litre, incident by incident, they’re losing whatever trust Traditional Owners have in them.” In light of the accident, Mr O’Brien said at this time as far as the Traditional Owners are concerned, the Ranger 3 Deeps project “is now off the table.”

The chairperson of the Aboriginal Elders led Western Australian Nuclear Free Alliance (WANFA) and co-chair of the Australian Anti-Nuclear Alliance, Kado Muir said that Australia is yet to learn from the Fukishima disaster. “The only safe place for uranium is to leave it in the ground. It has never been safe for anyone when we have mined it.”

Mr Muir has long fought against proposed uranium mines on his Yeelirrie Country arguing that the risks to Country “are too vast, too toxic, too poisonous for far too many generations to come.”

“Uranium is the asbestos nightmare of the 21st century but radiation poisoning from uranium and nuclear disasters will pale the dangers and disasters from asbestos.”

“What has happened in Kakadu should be a wake-up to all Australians, and I say to all influential Aboriginal persons in our Governments or who have the ear of the Prime Minister do something now to save Country.”

“Everything that can be done to stop any mining of uranium must be done.”

“This disaster just reinforces the fear in Aboriginal communities that there really is no second chance with uranium mining, and when the companies and Government fail in their duties to the environment, it is us, the Traditional Owners and the Australian people who are left holding the toxic legacy. We need a full public inquiry into the opening of new uranium mines across Australia and the people need to be assured that existing operators will clean up their act,” said Mr Muir.

Despite renewable energy being the fastest growing energy industry in the world, nuclear energy is long established and far outweighs what renewable energy provides. Multinational resource companies have invested in uranium sections to their companies – with huge financial capital dropped into research and development. One insider in a uranium section of a resource company said that the resource industry have sited more than 40 potential uranium mining sites alone in Western Australia, and that the Northern Territory, South Australia and Northern Territory are being further canvassed. He said that the industry, supported by Australian Governments, current and future, is not concerned about any resistance from Aboriginal communities.

“Uranium is the oil and gas, the gold of the future, maybe even blood diamonds.”

“There’ll be protesters but they won’t get in the way. Did the Jabiluka protestors really get in our way. The future is nuclear, not renewable, that’s a secondary industry, not primary. Indigenous communities will consent and sign off deals, just like the Martu (Western Australia). That’s the way it goes.”

But according to South Australia’s Arabunna Elder, Kevin Buzzacott, the protest movement is growing and he said “we are standing in the way.” Mr Buzzacott is the president of the Australian Nuclear Free Alliance and for decades he has campaigned against the uranium mining expansion at Olympic Dam on his Country. “They are drying up our Country, the water is going, it is impacting the environment, and one major disaster would render our Country useless. Kakadu should send shivers up the spines of all Australians but I do not understand why it has not made the television news. What has occurred in Kakadu is scary.”

Wiluna Elder, and anti-uranium campaigner, Glen Cooke agreed with Mr Buzzacott that the World Heritage area of the Kakadu was put at risk. “I feel for the people of Kakadu, it is rich in history. Kakadu is a library of (the local peoples’) history, thousands of years of (rock) art, sacred sites, ritual areas, of colours and songlines, of places where boys go to become men and girls to become women. Kakadu is the heart of Australia’s beauty and it should never be hurt by radiation. If they do not learn from this burst tanker then they should regard this as just the beginning. They risk losing Kakadu. They risk all our Country wherever a uranium mine is set up,” said Mr Cooke.

Mr Cooke’s people live nearby a potential uranium mine development. If the Toro Energy project becomes operational with a timeline of 2015, two open-cut mines at Centipede and Lake Way will produce at least 780 tonnes of uranium oxide a year – for at least 14 years.

“The miners will go one day, they may go safely but they may leave radiation and a dustbowl with us forever, and then we will have to go, with many of us very sick.”

Mr O’Brien said that GAC will request assistance from expert bodies such as the World Heritage Committee. Mr O’Brien called for an independent external audit of the Ranger uranium site, noting that this serious contamination was the third breach in less than a month. But the ERA’s General Operations manager, Tim Eckersley, responded with a public statement saying the leak would cause no environmental impact. Mr Eckersley stated that there was no explosion and checks and balances took effect.

“The slurry moved outside the bunded containment area, but has been captured and contained on site.”

“Containment systems stopped the flow and this has meant there is no impact to the surrounding environment,” said Mr Eckersley.

“ERA is focusing on clean up and recovery and the protection of the environment and the health and safety of our people remains paramount.”

“Upon discovery of a hole in the side of the tank, personnel were removed from the nearby area before the tank failed and a mixture of slurry escaped.”

Australian Conservation Foundation spokesperson David Sweeney said, “The time for mining a problematic and polluting mineral in a World Heritage area is over.”

Ranger mine is one of only three mines in the world to produce in excess of 110,000 tonnes of uranium oxide. Following the completion of mining in the operating Pit 3 at Ranger in 2012, ERA began the transition from open cut mining to underground exploration of the Ranger 3 Deeps mineral resource.

In 2010, millions of litres of radioactive water from the Ranger uranium mine flowed into Kakadu’s wetlands. The Traditional Owners opposed then plans for a huge expansion of the 30 year old mine by ERA. At the time, the ERA attempted to downplay a spike in contaminated water flowing from the Ranger to Kakadu’s Magela Creek between April 9 to 11. 40 Aboriginal people lived downstream from the site where a measure probe recorded up to five times the warning level of electrical conductivity – including uranium, sulphate and radium contaminants.

“As more of our people understand the death knell dangers of uranium mining we will then come together in greater numbers and we will close down Ranger and Olympic Dam,” said Mr Buzzacott.