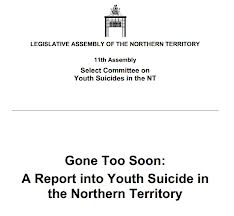 Empowerment and pride are a formula that works positively to the betterment of the human condition, and to individual freedoms. Where empowerment and pride are lacking, communities and individuals languish in both dysfunction and malfunction, with the worst culminating in suicide. This explains in part the world’s highest suicide rates which are found among the world’s Aboriginal peoples. With the worst rate found among Aboriginal peoples in Australia – especially among youth.

Australia’s Aboriginal youth is seven times more likely to commit suicide than non-Aboriginal counterparts. This national shame has been effectively criminally neglected by State and federal governments and there is no show or sign by them of funding Aboriginal controlled and Aboriginal serviced suicide prevention strategies. There is no sign of governments wiping away the ridiculous third world impoverishment that 100,000 Aboriginal peoples endure in this first world nation – the world’s 12th largest economy, per capita the second wealthiest nation on the planet, with the world’s highest median wages. There is no sign of governments dishing out equality, of improving the well-being of community with equity the equivalency to that of non-Aboriginal communities and townships, nor of respecting adequately the cultural integrity and rights of Aboriginal peoples particularly in the remote and regional areas – and therefore rather than cultural bridges there are only more cultural divides.

Determinism plays its hand as Aboriginal youth are born into grief, into the effects of the Stolen Generations, into cultural divides where cultural healing is still to be realised, into cultural loss, into racism and into the endless deaths – premature deaths.

Far too many Elders and community leaders have said to me that most Australians cannot or fail to realise how much grief Aboriginal children are exposed to. People dying from suicide – adults and youth – dying prematurely from illnesses – the passing of life happens either weekly, fortnightly but not any further apart than monthly in Aboriginal remote and regional communities.

Many are confused by the spates and spikes of suicides, having presumed that the granting of rights to First Nations peoples all around the world would improve their well-being.

671,000 Australians identify as Aboriginal, but if we standalone the poorest 150,000 of our Aboriginal peoples, a significant proportion of them are living in third-world akin conditions in the world’s 12th largest economy. These statistics underwrite research I have titled “The Aboriginal Clock.”

Since releasing my findings that Aboriginal youth are dying at the world’s highest rates it was sad to note that it did not stir much of a ripple, not much impact at all on the Australian consciousness. The chronic neglect and maltreatment of Aboriginal peoples are matter-of-fact in Australia. We accept much with very little outcry; the news media and governments despite highlighting chronic problems do not prioritise Aboriginal peoples and the underlying issues. Racism has many veils and layers.

Thirty years ago Aboriginal youth was not killing itself at the rates we have today, nor was this the case twenty years ago, and ten years ago the suicide rates were much lower than today. The suicide rates are on the rise, the median ages of suicides are getting younger – this evidences the sense of hopelessness felt by many. Much of the hope of previous generations invested in the Black Power movements, in the Land Rights movements, in the striving for Treaty and equality has dissipated for many Aboriginal peoples who have waited and nothing positive has eventuated for them, and for many the belief is that they have less now than they did two decades ago. I have interviewed more than 100 Territorian Aboriginal Elders, and similarly more than 100 Aboriginal Western Australian Elders for research titled “Climate of Death” and “People are not the Property of People; the Northern Territory is a prison built brick by brick by the Commonwealth” and the overwhelming majority described beliefs that all that they or their parents struggled for two and three decades ago has now vanished.

They despair at being effectively forced into surrendering culture, their homelands, their right to their historical identity. They were prepared for integration and the best of both worlds but they reject assimilation. No other cultures in Australia despite the various xenophobia that prevails contemporaneously have been so harangued as Aboriginal peoples are to let go of their historical and cultural identities – that is beyond the insulting tokenism we are prepared to allow.

We have long known what Canada’s Dr Michael Chandler and I have validated – that the rates of Aboriginal suicides, the world over, are higher than that of non-Aboriginal populations. Each life lost should have been a message to get our state of affairs in order – this is the best prevention strategy, to allow people their full suite of rights, the right to equality, the right to be who they want to be within a normative setting of their own. Each life lost reminds us of our prejudices, our biases, our racism, our failure to resist the simple mindedness of assimilation. Between 1994 to 2006, the rate of Aboriginal suicides averaged 25.7 per 100,000, that is 70 per cent higher than in non-Aboriginal Australia.

Early last year the federal government promised to back recommendations from The Gone Too Soon report, released by a Northern Territorian parliamentary committee. In the Northern Territory between 2007 to 2011, with Aboriginal children accounting for 75 per cent of all child suicides. At the time, federal Indigenous Affairs minister Jenny Macklin said, “We will make sure that we make a considered response and also make sure that the additional services that we put in place correspond to the recommendations in the report.” More than a year later little has been done, next-to-nothing.

“We will take this report very seriously,” had said Ms Macklin.

Twenty three recommendations were made which included the assignment of youth engagement officers from within the police, more mental health workers, psychiatrists and counsellors. These have not been lived up to nor the calls heeded for the integrity of cultural identity, pride and empowerment within communities and peoples, and their homelands, by Wes Morris, Dr Michael Chandler and many others.

The Gone Too Soon report found that Aboriginal suicide programs, run by Government and their services, not by Aboriginal controlled services, are fragmented and uncoordinated and continue to fail to stem the tide of suicides.