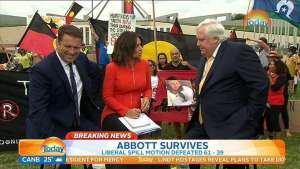 On the day that the Prime Ministerial leadership squabble went to a spill motion, two hundred supporters of the Freedom Movement struggle marched from Aboriginal Tent Embassy to Federal Parliament. They were met by a huge police cordon blocking entry to the forecourt of Parliament. They stopped right in front of the cordon and right next to the huge media cartel which was consumed with the leadership squabble. The protesters hoisted scores of flags and banners, and commenced a sit-in.

The nation’s media and politicians did everything they could to avoid the presence of the protesters but ultimately painful issues that burn deeply in the daily lives of far too many First Peoples were aired to audiences around the nation even if major television morning programs and news shows obstinately refused to comment to the issues and to why the protesters were there.

In the immediate background to the Today, Sunrise and ABC Morning programs, and of other live streams on the leadership spill, the protesters raised banners with memes on the cruelty of the horrific child removal rates, on the deaths in custody, on the jail rates, on the dispossession of their homelands, on their impoverishment. Some producers of programs complained to the protesters that their loud pleas for attention to their life-threatening issues, that their chants highlighting horrific injustices were so loud that audiences were hearing them instead of their program hosts and interviewees cheerily mulling over next-to-nothing about the leadership squabbling.

One protester said to a producer, “Well then will you air on your program in the near future our issues? Will you interview us too?”

“This appears to be the only way for our suffering at the hands of Governments and of this nation to be heard at all.”

With the exception of Channel Ten News’ Hugh Riminton and Today’s Karl Stefanovic, it was an indictment of the national consciousness, and not just the mainstream media alone, in how easy they dismissed the overwhelming Aboriginal rights struggle presence.

The Freedom Movement was unrelenting lasting through the day and into the next, ensuring they were noticed by the nation even if it meant hijacking the media circus about a me-generation leadership squabble.

“I am proud of what we achieved on this day. We came to the mountain. It is what we have to do if we are ever going to have any real hope of being heard, of having the taking of our children someday soon stopped, of reducing the evil jail rates of our people, of protecting our homelands from dispossession, of ending the extreme poverty of too many of our people.”

Parliamentarians wandered through the media set-up, with the majority of them trying to avoid the protesters, a sad sight. The protesters civilly confronted some of the parliamentarians and raised their issues. Some responded to them and others passed the buck or were dismissive of the issues that not only destroy lives but are taking lives. It bespoke volumes of the malaise among politicians of the cruel issues that blight far too many descendants of the First Peoples of this continent.

The leader of the Opposition Bill Shorten was corralled by protesters and questions were put to him. He responded with reductionist comments. Billionaire politician Clive Palmer handled questions best and was the only politician to carry their issues to television audiences, choosing to air their issues and dismissing the leadership squabble.

The Federal Minister of Indigenous Affairs, Senator Nigel Scullion walked out of Parliament to meet with the organisers of the sit-in. He invited Mr Sansbury to organise a delegation to meet with him in Parliament after the spill motion. Mr Sansbury, alongside Freedom Movement delegates, Michael Anderson, Jenny Munro, Chris Tomlins, Les Coe, Christine Abdulla, Roxley Foley, Vanessa Culbong and Ben Taylor met with the Minister. They slammed the Indigenous Advisory Council, criticised failed and dangerous Government policies. They damned assimilation, spoke of what sovereignty means, and of all the issues that readers of this news site know only too well.

Grandmothers Against Child Removals began to arrive later in the day and joined the Freedom Movement protest action on Capitol Hill. This Friday, on the day seven years ago when Prime Minister Kevin Rudd delivered the Stolen Generations Apology, they will protest at Capitol Hill that the Stolen Generations cruelly continues. Listening to their painful narratives, tears flowed among many. I took it upon myself to phone Senator Scullion and suggest to him to meet in person with the Grandmothers and the whole of the Freedom Movement crowd at Aboriginal Tent Embassy.

He agreed and fronted at Aboriginal Tent Embassy to meet with the Grandmothers, Mothers, families and the Freedom Movement supporters.

Ms Munro invited him for tea and cake with everyone. It was free flowing conversation, it was fiery at times, there were mothers who broke down. Spokesperson, Hazel Collins let fly, holding little back. Their stories was what Senator Scullion needed to hear in person. He promised to work closely with the Grandmothers.

“I have children, and if anyone were to stop me from seeing them I don’t know what I’d do. It is the worst thing that can happen,” said Senator Scullion.

“Hopefully he does. We’ll see if he does. He has to do it from now,” said Ms Collins.

On Capitol Hill, a sit-in continues with the Freedom Movement adamant it will not devolve after its rise from nowhere four months ago.

“Young and older among us have come together for the sake of our peoples right across this nation. We are reclaiming our voice and people nationwide are understanding that the Aboriginal rights struggle has a way to go.”