Kicked off a train for being ‘Black’ – but Midgegooroo watches 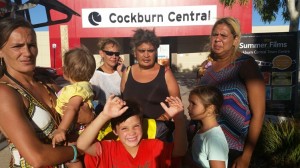 “They are grabbing Nicole. They are pulling her off the train.”

“They are kicking us all off the train. We haven’t done anything.”

“What are you doing? You can’t just kick us off for being Black.”

Two Railway Patrol Officers boarded a train at Cockburn Central Station, south of Perth. They followed up a complaint from a passenger who had called TransPerth off their mobile.

Without any evidence other than a complaint from one party, eight individuals – four adults, four young children (two of them toddlers) – were bundled off the train. But of course they’re Black, this is some sort of par for the course. Therefore in insularly racist Western Australia where prejudices and stereotypes do the rounds daily, being Black is enough for various authorities to cast aspersion. It is as if they have some sort of immunity to do so. Western Australia is mud thick deep in racism. Sadly, many Western Australians do not see their racism. They can call someone a ‘lazy coon’, or ‘a good for nothing Gin’, or ‘loud Black bastard’ and ditto with certain migrant groups referring to them ‘as money grubby wogs’ and ‘reffo bastards’ while still carrying on with hand on heart that they are not racist. Being of colour myself, and having lived in Western Australia for two decades, I felt the burning racism of this State from when I first arrived.

The Aboriginal Legal Services does not have the resources to defend every single victim of racism – or every poor soul who is arrested. Hence many are railroaded into jail. The Aboriginal Legal Services of Western Australia and its long-serving CEO, Dennis Eggington have long despaired of the State’s racism. But 10,000 move-on notices! This is in addition to the catastrophic statistics – nearly 2,500 of their adults are in one of the State’s 14 prisons, more than 2,000 of their children have been removed from their families by the State. Another couple of thousand sleep rough, in addition to the uncountable itinerant population, and in addition to the tens of thousands who are dished out extreme poverty. But Western Australia is this nation’s most affluent jurisdiction, with the world’s highest median wages. Standalone, the WA economy would be larger than the economies of 140 countries.

Today, a score of well-respected Noongars converged on an Anglican Cathedral in the heart of Perth’s commercial district where possibly the remains of one of their resistance fighters, Midgegooroo, the father of Yagan, have been uncovered in various earthworks. Midgegooroo was executed by the colonialists four years into the invasive colony – in 1833. His son, Yagan would be murdered months later. Well known Noongar rights advocate, law student, Marianne Mackay and four of her young children spent the day alongside Elders outside the Anglican Cathedral. The Elders, such as Albert Corunna, are the direct descendants of Midgegooroo and Yagan. Ms Mackay may not be a direct descendant but she is nevertheless related to Midgegooroo and similarly so of the other Noongars murdered by colonialists and buried unceremoniously at the site. At the end of their vigil Ms Mackay, her children and her companions boarded a train south bound. To reach their destination they changed trains at Murdoch Station. 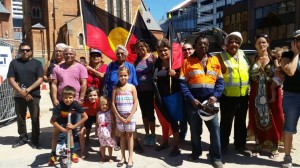 “This is where it all began,” said Ms Mackay.

They got on the homeward bound train, with a pram, four children. Two of the adults were carrying their flags, rolled up.

“We got these dirty gestures and looks. We live with that sort of behaviour.”

“One lady gave us the finger. I couldn’t believe it.”

“I shouldn’t have been surprised but well I want to think better of people because there are really good White people too,” said Ms Mackay.

“Then there started some of the racist comments, the usual stuff, in line with the get over the invasion stuff.”

“I am one to talk to people and I tried to talk to them, talk to them about our peoples, what we have been through, what we go through but it didn’t resonate. We just got more garbage hurled back at us.”

“You’d think they’d have some honour you know, with my kids with me, but you know we get put down all the time.”

“But we have to be strong, stay strong, so the children grow up strong.”

But people should know better. Here is another young generation being dished out that being Black is a liability; that they are targeted. This racialism is racism. Yet you will have people swear that they are not racist. Racism has many veils and layers. Railway Patrol Officers boarded the train at Cockburn Central and who following up what I believe to be a malicious phone call sought out Ms Mackay and her companions. Here, I have to declare an impartiality conflict of interest because I heard part of what was happening on the train and I must state that I found the conduct of the Patrol Officers deplorable. I had asked Ms Mackay to not end the phone call, so I could hear what was happening.

I asked to speak to the Officers. They refused.

Ms Mackay said, “I asked them why they were targeting us? I asked them what is it that we are supposed to have done. They came back with the obnoxious argument that we were being ‘loud’. Someone phoned them and complained about us being ‘loud’. The train guards would not listen to anything we had to say.”

I have contacted TransPerth and discussed what occurred and suggested that it does not appear that the Officers had any reasonable ground to eject anyone off the train – not the White passengers, not the racists, not Ms Mackay, not her four children, nor her three companions. The conduct of the Officers was more than just discriminatory, it was racist, no question. They can argue it otherwise, and obviously they will but I can state what it was. I have seen it in every layer of society in Western Australia. It must be said, fearlessly, and chased down. It was racism. I have lived racism since I was born; I know when it occurs. My academic research has studied racism but with a focus on the ways forward. The Officers should have deescalated the situation but they did not. Instead four young children had a taste of racism Western Australian style. And till things change in this far too often redneck State, they will taste a lot more of it.

But there were two young White men on that train who did not want to have a bar of the racism and who stood up to be counted. As the Railway Patrol Officers were forcibly removing one of Ms Mackay’s companions from the train – Nicole Culbong – the two young men jumped up from their seats and told the Officers that they were wrong in their assumptions. They stated Ms Mackay’s party had not done anything to justify their ejection from the train. One of them was allegedly pushed back and both were told by one of the Officers to “stay out of this”.

However they would later file complaints to TransPerth. Good on them. There should more Western Australians like them. In time there will be. 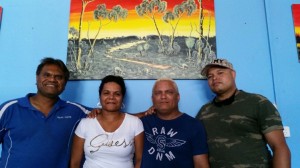 The Officers will now have to rely on the gamble that the CCTV footage will show some misbehaviour by Ms Mackay and her party so in some way to justify their racist judgment call. The Officers and TransPerth can argue all they like to about “zero tolerance” and “safety” but this is all bullshit. There was no violence or any threat of violence. There was no threatening disorderly conduct. There was some racism from some White passengers. There was a discussion by Ms Mackay and Ms Culbong about what her people continue to endure. The Officers should be ashamed. But even more ashamed should be the passenger who nicked in a complaint to TransPerth. More ashamed should be the passenger who kicked off the racism with her deplorable gesture to Ms Mackay and company. But you know it happens all the time. Racism has been normalised in Western Australia despite vilification laws and the boundless tokenisms.

I decided to drive from inner city Perth to Cockburn Central to pick up Ms Mackay and her children and deliver them to the sanctity of their home. As I exited the freeway and onto Beeliar Drive I remembered this part of southern Perth was Midgegooroo’s Country. Beeliar Drive is named after his Country – Beeliar. Then I remembered that it was right where Cockburn Central now stands that Midgegooroo was apprehended by the colonialist invaders. He was jailed at a grubby barrack where now the Anglican deanery stands in the heart of Perth’s commercial district. On May 22, 1833 he was murdered by a firing squad – no trial. Not that he could speak the Queen’s English… As I turned right off Beeliar Drive into the street that would lead me to Ms Mackay on this hot sweltering day, I noticed the street had been renamed Midgegooroo Drive. I and Ms Mackay would consider this both a remarkable coincidence and eerie.

– The Stringer will publish TransPerth’s response once we receive it.

Leave a Reply to Heather