Ken Loach, the Palme D’Or award and a film on the horrors of neoliberal austerity 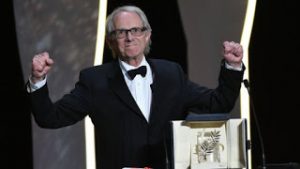 The world we live in is at a dangerous point right now. We are in the grip of a dangerous project of austerity driven by ideas that we call neo-liberalism that have brought us to near catastrophe. It has led to billions of people in serious hardship and many millions struggling from Greece in the east to Spain in the west while this has brought a tiny few immense wealth….. When there is despair, the people from the far right take advantage. We must say that another world is possible and necessary.”
Ken Loach in his acceptance speech to the Cannes Film Festival.

Great to hear that British left wing filmmaker Ken Loach has won his second Palme D’Or at the Cannes Film Festival for his new film I Daniel Blake about the impact of Britain’s barbaric welfare system.

In his acceptance speech Ken Loach slammed neoliberal austerity policies and welfare cuts across Europe and in Britain:
“There is a conscious cruelty in the way that we are organising our lives now, where the most vulnerable people are told that their poverty is their own fault… If you have no work it’s your fault you haven’t got a job”

I Daniel Blake shows what happens to people trapped in a punitive neoliberal welfare bureaucracy designed to give expression to the political rhetoric of ‘lifters and leaners’ in contemporary Britain. 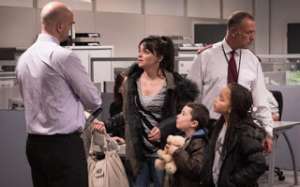 The film documents the shame and horror of poverty and ‘workfare’ in the UK and shows what happens when an older man living in Newcastle has a heart attack and can no longer work. He is declared fit for work, meaning his benefits are stopped, and he goes hungry.

A review of the film from the UK Independent is here:

Ken Loach’s latest feature (unveiled in competition in Cannes) is a story of an eminently decent man being ground down by an uncaring British welfare state. Scripted by Loach’s regular collaborator Paul Laverty, it is a melodramatic and sometimes very didactic film but also an intensely moving one.
This is the second time that Loach has won the Palme D’Or, the Cannes Festival’s highest award. Loach won the award in 2006 for his film The Wind That Shakes the Barley, about two brothers who join the IRA in the early 1920s. He is the ninth Director to win the award twice.

Loach, who has directed 50 features for screen and TV, has been a left wing socialist activist and political campaigner for most of his career.
Categories : Arts & Letters