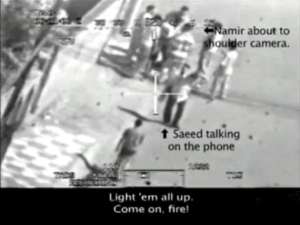 Julian Assange remains in wait within London’s Ecuadorean Embassy, notoriously hounded despite his courage to tell the truth. He has committed no crime against humanity. He has murdered no-one. He is hounded as if he has. But the murderers and their keepers of the July 12, 2007 Baghdad airstrikes by US forces where air to ground attacks deploying US AH-64 Apache helicopters killing innocent civilians and journalists, have never been brought to account. Three years on from this incident the world would be availed to the awful truth. WikiLeaks released 39 minutes of the ‘classified’ gunfight footage.

WikiLeaks secret-spilling of the murder of civilians in Iraq and the ‘cablegate’ database of State Department communications should have indicted the American military and their government’s administration. The world’s media should have sustained the coverage on this and demanded accountability but instead the focus is on Assange’s reputation as an individual.

On April 5, 2010, WikiLeaks released classified US military footage of the slaying of people in an Iraqi suburb. The civilians included two Reuters news staff; none appeared threatening but were soon dead. The footage clearly shows the unprovoked slaughter. Disturbingly, a wounded Reuters journalist and his potential rescuers were slaughtered. Children were injured in the attack. But instead of the military owning up, they covered it up. They were backed by the Pentagon. Reuters Agency sought answers but an investigation by the military of its own cleared everyone.

It is said that no lie lives forever, but it is not my experience that truth prevails. No grand lie should ever be got away with, that is the tenet of a sane society.

The release of the Collateral Murder Video was whistleblowing at its best; that indeed no lie should prevail. But instead of the media viciously turning on some of the world’s most powerful institutions, other than reporting on the leaked footage and engaging in some banal discussion, they have sidestepped the abomination of the murder of innocents. If this footage had been of African or Middle Eastern murderers the western media would have called for blood, with headlines, “Baghdad Butchers”, “Libyan killers”. But America can commit one crime against humanity after another, whether in Panama, whether in the Middle East, wherever and they will not be brought to account. America has been involved and/or initiated more than 100 wars around the world since World War 2.

Abu Ghraib and Guantanamo are crimes against humanity however they are sold as ‘American anger’ and justified as part of the ‘War against terror’.

The WikiLeaks Organisation website states, “WikiLeaks wants to ensure that all the leaked information it receives gets the attention it deserves.” It did for a while but now this seems so long ago.

Saleh Matasher Tomal was driving by and instead of valuing exclusively his own life he stopped to help the injured Chmagh. He had his children with him. In a second airstrike Chmagh and Tomal, in addition to three others, were murdered from up above. Two of Tomal’s children were critically injured.

The Apache strikes did not stop. It did not matter that no one on the ground carried any weapons and that at no time did they appear threatening. Those above were safe, with the most advanced technology to view those below. But they shot them.

There was obvious panic on the ground, people fled to nearby buildings. In the third strike fired on a building where people fled for dear life. AGM-114 Hellfire missiles exploded into the building.

Reuters tried to secure the footage in 2007 and 2008 through Freedom of Information but they were denied. If it was not for WikiLeaks securing and then publishing the footage, the world would never have known. Despite the effective media blackout since the worldwide coverage, hundreds of millions of people around the world know the truth.

The Apache that flew over the injured Chmagh saw him crawling, fighting for life. The gunner stated his disappointment at the fact Chmagh did not evidence a weapon. The military’s rules of engagement prohibit firing on the unarmed. But then Saleh Matasher Tomal approached Chmagh in his van. He had been driving his children, nine year old Sajad and six year old Doaha to school. They would later state that their father had said to them he wanted to help the injured man and drive him to hospital. But the Apache had time to assess whether anyone in the van was armed. Tomal and his children stepped out of the van to help Chmagh. A crew member from the Apache kept on repeating, “Let me engage”…

But before permission was granted to fire, the crew fired. Chmagh and Tomal were killed. The children injured. The van burned.

Some twenty minutes later the Apache crew would fire on the building where people had fled.

The fact is that the Apache fired on civilians, it was clear they were not carrying weapons. One of them was only ‘armed’ with a camera. Children were fired upon. To many it appeared that the crew were eager to claim scalps, appearing to treat the strikes as some sort of video game. There are many who have defended the actions of the Apache personnel. But what cannot be defended are the lies by the American military, the American government, the Pentagon, of the airstrikes.

The Pentagon stands by its statement that the 39 minutes of footage released to the world by WikiLeaks does not contradict earlier Pentagon statements. They continue with the sell that “engagement” was justified because the group that were fired upon was carrying an RPG (rocket propelled grenade). Watch the footage and make your own mind up.

Former military analyst and NSA whistleblower Daniel Ellsberg stated, “As the killing goes on, you obviously see the killing of men who are lying on the ground in an operation where ground troops are approaching and perfectly capable of taking those people captive, but meanwhile you’re murdering before the troops arrive.”

The killing of those individuals was murder – an abomination from whatever vantage, moral, political and otherwise.

It is more than half a decade since WikiLeaks’ courageous publishing. Chelsea Manning is in prison. Julian Assange is hovelled in London’s Ecuadorean Embassy. WikiLeaks Publishing Organisation is a threat to those who carry on in Kafkaesque and Orwellian ways.

Leave a Reply to David