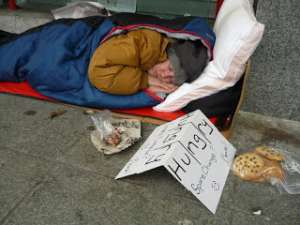 A ruling by an Italian Court shows that courts can make decisions that reflect moral logic and reasoning, challenge narrow legalistic interpretation and challenge the sanctity of private property over human necessity, by ruling that the right to survival prevails over property.

Italy’s highest court has issued a ruling that stealing small amounts of food to stave off hunger out of dire necessity is not a crime. The Court ruled that right to survive prevails over property.

The Court’s ruling involved a case of a 36 year old homeless Ukrainian man who stole $5 worth of cheese and sausage from a Genoa supermarket in 2011. He was tried, found guilty, fined $150 and sentenced to 6 months in prison.

The High Court found that the man took the food “in the face of an immediate and essential need for nourishment, acting therefore in a state of necessity” and was not illegal.

The Court wrote:
“The condition of the defendant and the circumstances in which the seizure of merchandise took place prove that he took possession of that small amount of food in the face of an immediate and essential need for nourishment, acting therefore in a state of necessity”

The Italian newspaper La Stampa endorsed the Court’s decision and many other Italian papers supported the decision. An opinion piece in Corriere Della Sera noted that statistics suggest 615 people are added to the ranks of the poor in Italy every day and it was “unthinkable that the law should not take note of reality”.
Another newspaper Italiaglobale said the “historic” ruling is “right and pertinent” and derives from a concept that “informed the Western world for centuries – it is called humanity”.
Articles about the case are here, here, here and here.

US Public Defender Alec Karakatsanis compared the Italian case to the US case of Michael Riggs, who was sentenced to a 25 year prison sentence for stealing vitamin pills in a petty theft motivated by hunger and and homelessness. Riggs was imprisoned under California’s 3 Strikes law.

Of course it also raises the question, what is the worst crime?- a homeless person stealing food worth $6 out of hunger, or a society where hundreds of thousands of people, including children are forced to live without shelter or a house and where even more children and adults are forced to go hungry without adequate food every day.

And lets not forget the case of the 12 year old Aboriginal boy in a WA country town charged with a criminal offence for receiving a stolen chocolate frog worth less than $1 because the police wanted to teach him a lesson, while the authorities and Police did nothing to charge a high profile West Australian businessman who stole $100 million of other people’s money.
Categories : Breaking News