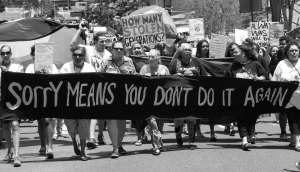 Last week I reunited a 14 year old girl with her biological mother. She had been removed from her mother at 12 months of age. Children removed from their biological parents are among the most elevated risk groups to serious aberrant behaviour and to suicide. On the day of her reunification she called me to thank me. I was happy for the child and mother and at the same time sad in the knowledge that the majority of children removed should not have been.

In my work with suicide affected families I come across stories that the nation should hear. Six years ago two sisters under child protection orders ran away from their carer. The protection orders were not lifted. Next to no work was done to assist these girls with kin support. They were 11 and 13 years old and spent the majority of the six years on the streets. The eleven year old recently took her life, on the streets, as a 17 year old. So much more should have been done.

A quarter of Australia’s homeless, nearly 20,000, are children aged 12 years and less.

Australia has the highest rate of child removals in the world.

Child protection authorities and their personnel may think they are doing a good job, but overall they are not. The majority are well meaning but that’s not good enough. There are prejudices, class and racist assumptions and horrid policies that betray the well-meaning bit. There should be a royal commission into the child removals, and the horror stories told to the nation in the same manner and with as wide a remit as the nation was allowed to hear the long overdue stories of the institutional sexual abuse victims – more than 8,000 stories.

Presently, 17,000 Aboriginal children have been removed, an abomination – where instead the majority of families should have been supported. It will continue to get worse and more harrowing with more than 50,000 children removed by 2030.

However despite the tragic disproportionate over  presentation rate of Aboriginal child removals, the high rate of child removals hits White and Brown children too, not just Black. Australia has to be brought to account for its high rate of child removals, of tearing families apart instead of the much begged for focus with working alongside families. Personnel defend their well-meaning but the majority of child protection workers are from the sea of privilege. The future will condemn the present generations as the present condemns the past. But we should not wait for a mere condemnation from the future.

It is my view the best way forward to radically reduce the damage being done by child protection authorities is to reduce their funding. I published the following in October 2016.

– Gerry Georgatos is a researcher with the Institute of Social Justice and Human Rights. He also works at the coalface alongside the vulnerable.