It does not pay to be racist 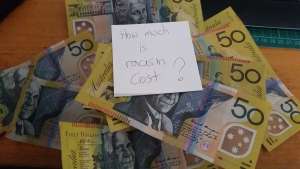 There are many people out there who send me emails and Facebook posts accusing me of “social engineering”, “political correctness” and all variety of society destroying activities as I have attempted to raise issues of vilification and discrimination on the basis of race, religion and other ethno cultural attributes. It has often been hard to counter these arguments in an economic sense as it is hard to measure the impact of racism on a victim. Measuring the hurt and angst that is caused by acts of racism is difficult at best. But there are people who will tell you that it is long lasting and often deep.

So it is with great interest that I read about the work of the Deakin University researchers that was released early last month. This was part of the release that accompanied the publication of results of the study:

“The cost of racial discrimination has had a dollar figure placed on it for the first time thanks to landmark research by Deakin University funded by VicHealth and the Australian Human Rights Commission.

Dr Amanuel Elias from the Alfred Deakin Institute for Citizenship and Globalisation (ADI) has calculated racial discrimination costs the Australian economy an estimated $44.9 billion, or 3.6 per cent of GDP, each year in the decade from 2001-11.

Dr Elias explained that being able to quantify the cost of racism to Australian society is a crucial step towards addressing racial discrimination.

As a comparison below, of the cost of various chronic health conditions in Australia provides some insight:

Clearly at the purported cost of close to $45 billion the cost to the economy of racism would come in at a figure well in excess of any of the chronic health conditions mentioned above. So let’s have a look at how these costs are measured by the researchers:

Dr Elias then combined the data on the four health outcomes with statistics on the prevalence of racism to calculate the number of healthy years of life lost due to experiences of racism.

In his thesis, Dr Elias argues that the economic benefits of tackling racism are likely to outweigh the costs associated with fostering social cohesion.

“The overall economic cost of racial discrimination to an economy can serve as a benchmark to scope the size of anti-discrimination intervention,” Dr Elias said.

“In countries like Australia, where subtle interpersonal racism exists along with some forms of institutional discrimination, anti-discrimination interventions require relatively moderate spending.”

At a purported cost of $45 billion the issue of racism is one that directly impacts on the “bottom line” of our economy. It accounts for around 3% of Gross Domestic Product and is significant from a purely economic sense as well as all the social welfare and societal issues that we have highlighted in the past.

But there is also some good news according to the researchers as well as others:

“According to Dr Elias, the good news is that racial discrimination is a preventable social phenomenon.

“Research shows that anti-discrimination efforts that focus on the benefits of diversity can succeed in reducing racist attitudes and racial discrimination,” Dr Elias said.

“Concerted public awareness campaigns about the reality of racial discrimination and its consequences can alleviate its prevalence.

“For example, we know that positive contact among racially diverse groups is inversely related to the prevalence of racial discrimination and programs in schools have also shown considerable promise.

“This indicates the need to expand successful programs such as VicHealth’s Localities Embracing and Accepting Diversity and the National Anti-Racism Strategy auspiced by the Australian Human Rights Commission.”

“We know there is a human cost to racism in our society. Now we know something about the economic cost of it. This research will have an important impact on public understanding about racial prejudice and discrimination,” Dr Soutphommasane said.

“Race-based discrimination is a human rights violation that has negative impacts on the health and mental wellbeing of a person and can result in reduced opportunities for education and employment, reduced self-esteem, increased drug and alcohol use, self-harm and detrimental effects on cultural identity,” Ms Rechter said.

“As a community we can all take a stand and say no to racism when we see it. Workplaces, schools, sports clubs and arts activities are all proven avenues to help combat racism.”

There are two immediate issues that I would disagree with Dr Elias on. First of all, whilst I am in agreement that education campaigns and the like can be useful in eliminating racist behaviour into the future, I am also very much of the view that these campaigns are but one part of the strategy. Concurrent to this education process there must be strong legislation to protect people from acts of racism and to punish offenders. It has been my view that the punishment meted out in this respect must be restorative rather than punitive. So when the University student in Perth who posted the particularly vile and offensive stereotypical fake broadcasts about people of Aboriginal descent and culture, is sentenced my preferred approach would have been that that student be assigned to work with a couple of Aboriginal groups for a period of time. Likewise those recalcitrants that defaced the Mosque or Sikh Temple must be asked to work with some of those groups so as to gain a better appreciation of the cultural values that they may hold dear to themselves.

The second point of contention is that all of the discussion has been about the cost of race based discrimination and vilification. Since September 11 2001 almost all of the violations of human rights that have occurred worldwide have been religion based and not race based. The Muslim community has borne the brunt of this hatred. However, this type of human rights violation has not been captured under any of the legislative regimes here in Australia. Our laws have covered issues of race discrimination and vilification but other than Victoria there is no state that covers this form of hate crime.

But, for all of those people who send me abusive emails on a regular and constant basis, we now have this research that categorically states the cost to the economy of the racism that you are perpetrating. So if you are more comfortable in assessing economic value to social justice policy positions, you can see that RACISM DOES NOT MAKE ANY ECONOMIC SENSE either!