Inequality and racism are the offspring of exploitation 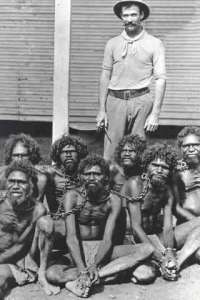 Racism in general is a convenient excuse – manufactured consent – for the economic exploitation and deprivation of peoples. Slavery is the purest form of the exploitation of people however it also occurs in other ways, of sexual, domestic and economic content. Slavery has often been disguised – whether by the ancient Egyptians, Greeks, Romans, the Europeans, Americans and by today’s Australians. The playing down of racism and of its redefining continues to this very day.

Concepts of ‘inferiority’ and ‘racial supremacy’ are attributions originating out of the exclusive pursuit to exploit human beings, whether as chattel or whether to dispossess them. To achieve these ends the exploiters have disguised their actions with false concepts intended only to justify the oppression and disenfranchisement of people. These concepts were sold so powerfully and wholesale that even the most learned individuals of their time justified slavery and racism while the more ignorant developed cultish behaviours around these presumptions.

My Masters and PhD research delved into racism however in pursuit of the ways forward, not to keep us hostage to racism, to its obscenity, to its veils and layers, to its subsequent entrenchment in the minds of people despite its coming from the injustices of the greed of people. The words of Martin Luther King during his March 25, 1965 speech at Montgomery, Alabama resonate with me:

“And so I plead with you this afternoon as we go ahead; remain committed to nonviolence. Our aim must never be to defeat or humiliate the White man, but to win his friendship and understanding. We must come to see that the end we seek is a society at peace with itself, a society that can live with conscience. And that will be a day not of the White man, not of the Black man. That will be the day of man as man. I know what you are asking today, ‘How long will it take?’ Somebody’s asking, ‘How long will prejudice blind the visions of men, darken their understanding, and drive bright-eyed wisdom from her sacred throne?’”

Slavery was borne out of acquired concepts of entitlement, spoils of war, punishment, debt – in all cases economic inequality was manufactured. With inequality, associations of inferiority were sold and which are a part and parcel of any oppressor and oppressed dichotomy. It has been washed through societies by exploiters that those whom they exploit are inferior.

According to the Trans-Atlantic Slave Trade Database, between 1825 and 1866, at least 12.5 million Africans were shipped to the Americas. Inferiority was sold by every layer of society, including churches, anthropologists, historians, psychologists, the legal fraternity, legislators.

Belgian King Leopold II, 1835 – 1909, was known as the Butcher of the Congo. Ultimately he was responsible for the deaths and mutilations of more than 10 million Congolese. Belgium today has benefited hugely from Congolese blood – from a narrative of the cruellest human suffering and misery. Leopold dispossessed the Congolese peoples and personally secured for himself more than 900,000 square miles of the Congo – and made a fortune from in-demand commodities.

Leopold’s brutality was by any standard evil but he was never held to account neither anyone of the many others like him. He applied the worst forms of violence as punishment to the Congolese in order to force their labour. They were routinely flogged, had their hands severed. Millions died. But the colonial brutality borne out of an exclusive striving to dispossess people of their lands, to exploit them as labour, to punish them for any dissent and non-compliance was a constant right throughout European colonialism till effectively the last century. The impacts of the colonial oppressor on the historically oppressed continue – the racism that justified these evils – this exploitative behaviour – justifying people as inferior, as less sentient has washed through in veils and layers to this very day.

Forced to dance to the White Man’s Song

White guilt is pernicious but for many it hurts so deeply that they instead choose a hostile denial of the racism that is dished on others. For others whom racism has seeped into their consciousness as a skew of ‘understandings’, for them there is hate of the ‘other’ – an ‘other’ manifest by exploiters, by the worst in humanity. In the end, resentment builds up within the silent, within the deniers, within the haters and ultimately the animosity becomes a daily lived experience.

It is not that any life matters more than another. It is that Black Lives Matter in the context that All Lives Matter but what exploiters manufactured was that Black Lives do not matter as much as White Lives. The ability to manufacture deceit is an easy objective, much easier than the discovery of truth. The ability to sell lies is humanity’s scariest proposition, its darkest self because despite the belief that no lie can last forever, lies have proven they can last centuries and millennia and wreak atrocity.

For the most part racism is not predominately structural or institutional but rather pernicious, a filthy unfounded gossip –  the exploiters knowing that the institutions of humanity are in fact people and that people can be sold anything some of the time and in general for long enough for evil deeds to be completed. Slavery and indenture may be unfolding as atrocities of the past but the racism continues. Racial inequalities borne of the horrific imposts of the past continue today. The propaganda that justified exploitation, disenfranchisement and segregation now wraps itself around the consequences of the past, the contemporary racialised economic inequalities. Racial inequality is a product of economic inequalities and exploitative behaviours – without redress the economic inequalities and hence racialisation continue.

Black people in the Americas and in Australia have to deal daily with economic inequality and what is therefore racial inequality. They live the horrific statistical narratives of racialised homelessness, wholesale extreme poverty, high arrest and jailing rates, horrific suicide rates. Australia is the world’s 12th largest economy, one of the world’s wealthiest nations however of all the middle and high income nations with relatively recent colonial oppressor histories Australia has the widest divides between its First Peoples and the rest of the population.

Humanity has a history of exploiting the other – whether Black or White. The English exploited the Irish, the Muscovites made fiefdoms of Russia, the Ottomans corralled whole peoples;  in many instances systematically denying them their right to cultural identity and language and selling the invader as superior. In the last half millennia the preponderance has been to sell the non-White as inferior for the oppressive White exploiter. The whole concept of race relations – Black in relation to White is reductionist and all about White supremacy but which is superfluous to the fact that the whole deal in the making slaves of people was to clear the land, to produce cotton, sugar, commodities. The whole deal in dispossessing peoples of their lands as was the case throughout Africa, the Americas, Asia and Australia was to reap from their lands. Those who were not hauled off their lands were effectively indentured as labour. When Western Australia’s pastoralists were told they had to start paying wages to their Aboriginal labourers and farmhands instead of fair wages they were all sent away, many into homelessness.

The whole exploitation deal justified oppressive policies such as the Stolen Generations, the Stolen Wages, the whole apartheid bit – but all along the constant was exploitation, the cheating of people – with assimilation and lip service their only way out; for the ‘lucky ones’. Their historical and cultural identities were liabilities, so many of them reduced the liability.

Despite the acknowledgment of past wrongs, and of current wrongs such as the degradation of homeland communities by one government after another, the worst racism of today is the rejection of governments to address economic inequalities. This rejection by governments has washed into the consciousness of the nation as a type of animosity against any prospect of reparations. This animosity is internalised by individuals as a racial hatred.

A moral abomination – a narrative that is racialised