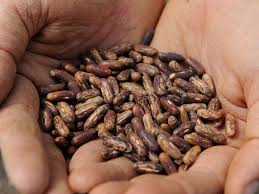 As climate change makes it more difficult to practice agriculture in their ancestral homelands, indigenous communities are exchanging seeds in hopes of finding the hardiest varieties.

They came from as far as Bhutan and China, and from as near as the mountain itself. They discovered that their cultures were more similar than they had expected, and that one concern had been troubling all of them: Climate change was making it harder to grow food on the mountains that had sustained them for centuries. They were meeting to do something about it.

During a series of talks held between April 26 and May 2, the farmers forged a unique partnership entailing the exchange of indigenous crop varieties and farming methods, which they hope will protect agricultural biodiversity in the face of climate change. The exchange will begin with potatoes—a sturdy crop that thrives in the mountains of China, Bhutan, and Peru—and will enable the farmers to experiment together from a distance, so they can find the hardiest, most resilient varieties.

Doing so will ensure better food security for the farmers’ families and communities because having more crops that can survive the unknown, potentially destructive effects of climate change will increase their yields and mitigate strains on various resources.

Crop diversity is a serious issue but one commonly overlooked in the United States, where the food system tends to rely on just a few varieties of each plant species; traditional farmers in the Andes, on the other hand, might grow hundreds of ancient potato varieties. The world has lost 75 percent of its crop diversity in the last 100 years, according to the United Nations Food and Agriculture Organization.

Today, many crops are cultivated in high-tech laboratories and tightly controlled experimental farm plots. These environments fail to mimic real-life growing conditions, according to Krystyna Swiderska, who works for the International Institute for Environment and Development (IIED), which helped organize the April meeting. Most crops used in modern agriculture, in other words, can only grow in ideal situations and might not survive in the chaotic, unpredictable ones that exist in nature.

The gathering included representatives of the Naxi people from Meiquan and Stone Village in Yunnan, China; the Monpa and Ura people from Bhutan; the Quechua and Q’ero people from Parque de la Papa; and the Q’ero Ayllu from Cusco.

“Communities cannot act alone because this issue is common [to us all],” said Andean farmer Lino Mamani in a video conference call. Mamani also curates the traditional seeds collection at Parque de la Papa, where six Quechua communities live and grow about 600 varieties of potato. “We can learn more from others with similar problems about technology that might be useful.”

When asked how climate change had affected their livelihoods, Parque de la Papa farmers began to stir in their seats, waiting for an opportunity to share their stories. One farmer noted how signs of climate change had been subtle for the past 15 years, but have become conspicuous in the last three.

“I’m farming some crops in lower areas now,” he said.

But, the farmers seemed to agree, the challenge is also yielding some positive outcomes: It’s pushing them to adapt their traditional methods of farming and to include other methods that might enhance their production. These include learning how to grow plants that pollinate themselves, farming newer potato varieties, and working with a fuller collection of seeds thanks to a collaboration with scientists at the International Potato Center, a research institution based in Lima that runs a gene bank facility.

The center will facilitate the exchange between farmers, and will fund much of the research conducted by its own scientists—who not only analyze the genetic potential of indigenous seeds in the center’s labs but also study the farmers’ traditional process on the Andean hillsides. Although seed exchange among farmers is an age-old custom, seeds shared in the context of this project will be subject to a stringent protocol that ensures their safety and purity, especially in transit. The actual exchange of raw material will not begin until such a system has been approved and implemented by the International Potato Center, according to Swiderska.
As farmer Mamani stated, “It’s time traditional knowledge and science work together.”

For years, however, they did not. Indigenous farmers from the Andes have long distrusted modern agriculture and felt exploited by its methods of research. For more than 40 years, scientists who worked for the center collected seeds from the Cusco region to advance the institution’s research and development. They refused to share their information with the farmers or even credit them for the success of their traditional methods, said Swiderska.

But that relationship has been improving recently. In 2005 the IIED partnered with Asociación ANDES, a Cusco-based nonprofit that has worked with Parque de la Papa farmers since 1998, to broker a “Repatriation Agreement” with the International Potato Center. The agreement granted Cusco farmers access to the Center’s collection of native potato seeds, which had been extracted years earlier from indigenous land and locked away in the gene bank.

“Small-scale and indigenous farmers rarely get access to seeds in gene banks,” Swiderska wrote in an email. “So seed exchange between farmers is important to enable them to [experiment with] new seed varieties”.

Working with scientists has been an emotional, challenging process, Mamani said. “Scientists would just take seeds from us, not recognizing our knowledge.”

But the tides are turning as climate change edges on, pushing science and tradition closer together to resolve common goals and slow the process of agricultural degradation. As Mamani said, “Scientists have been taught now how to collaborate with us. They have to respect our knowledge.”