Indian women are 2 of 5 of world’s female suicides 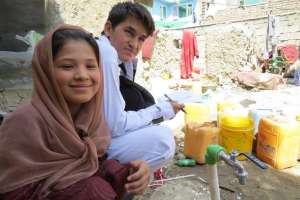 Fatima in her mud house compound, with Ali, an Afghan Peace Volunteer teacher who helped Fatima get a proper medical assessment

Gerry Georgatos – Annually, India accounts for nearly 200,000 of the world’s suicides. Poverty intersects and is the predominant underwriting narrative. Alarmingly, India accounts for nearly 40 percent of the world’s female suicides. Once again poverty intersects, particularly crushing levels of poverty. However, within the Indian poverty narrative there is pronounced patriarchy and within crushing poverty levels there are crushing patriarchal narratives that culminate in India’s female suicides crises.

To contextualise this, India makes up 17 percent of the world’s female population. The majority of female deaths by suicide are aged in the 20s. One of several horrendous lies of our generation is that extreme poverty around the world is being reduced. Indeed, abject and relative poverty levels around the world are increasing and the future is rushing to poverty and scarcity wars, but today’s – yesterday’s and tomorrow’s – generation skew and mask data, and with poverty alleviation ply us with propaganda.

The ability to discover the truth is outstripped by the capacity to manifest deceit.

Unpacking Indian patriarchy, its oppressiveness, and doing away with it will significantly reduce suicide tolls of Indian females despite languishing in reduced lives within poverty, crushing or otherwise. Doing away with patriarchy will significantly reduce the stressors that impoverished Indian women are subjected to. The freedom of the psychosocial self is imperative, to live free, with political will, despite abject poverty.

India is in slow burn mode with dismantling patriarchy and hence there is a decline of arranged marriages, a doing away with child brides, an increase of educated females.

The more education, the less likely one will be clinically depressed, the less likely to suicidally ideate – education translates to a dawn of new meanings, to a better understanding of the self, to a more positive psychosocial self, to the pursuit of what happiness and its contexts can and should mean.

Suicide rates are highest in rural and regional India where less has been done to lift populations from poverty. Southern India has higher suicide rates than northern India but though poverty prevails in both north and south, the disparities are wider in the south and the population masses denser.

The stories of suicides are harrowing and are captured by one media article after another, but to reduce the suicide toll there is needed an end to crushing suffering.

In the transition of Indian women to education and careers and to nuclear households, as opposed to extended families and communal living, educated women deal with the burden of career and family and there are an accumulation of stressors that lead to suicidality, to suicides however the majority of suicides are below the poverty line and patriarchy reduces impoverished women to the least of existences.

What can kill will always many more times to do so below the poverty line, whether it’s patriarchy, family violence, sexual abuse, bullying, mental health disorders, etc.

To compound the trauma of a suicide attempt, till 2017 suicide was criminalised in India. You could be punished with a year jailed or a fine. The Indian Government in some part came to its senses when in 2017 it passed the Mental Healthcare Act, stating people who attempt “shall be presumed, unless proved otherwise, to have severe stress and shall not be tried and punished…”

One-fifth of Indian women who marry are aged 15 years and less. Just about nearly all female suicides in India are of married women. One in four of the world’s male suicides are of Indian men – that’s another tragedy and story.

It’s an abomination that nearly two in five women in the world who kill themselves are Indian.

• Gerry Georgatos is a suicide prevention and poverty researcher. He is also the national coordinator of the National Suicide Prevention & Trauma Recovery Project.