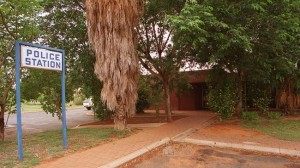 A woman being held in custory at South Hedland Police Station, pictured, complained of being unwell and a short time later died. Image: News Limited

The tragic death of 22-year-old Yamatji womn Julieka Dhu while detained in a police lockup over unpaid fines has now culminated in a coterie of calls for a comprehensive inquiry. The pronounced failures that contributed to the untimely and unnatural death of Ms Dhu have rightly garnered the attention of some but not of others. The Australian newspaper’s Queensland-based Michael McKenna and Western Australia Bureau Chief, Paige Taylor have sustained coverage on the tragedy.

As a researcher in custodial systems, and with Masters and PhD research in deaths in custody, I have rarely seen the sustained coverage of the like that Mr McKenna and Ms Taylor have delivered in a major mainstream newspaper. It is to Mr McKenna’s credit that after he read, as I did, on August 4, the few lines on news wire services that a young woman had died in a Pilbara police lockup that he knew the death had to be investigated, in light of the ongoing litany of deaths in custody. I have spoken several times with Mr McKenna and Ms Taylor about the tragedy but without their sustained coverage it is not likely that an inquiry will eventuate. With the exception of the The Australian coverage, NITV/SBS’s Craig Quartermaine, and my coverage with The National Indigenous Times and The National Indigenous Radio Service and on a couple of independent news sites, comprehensive coverage by others has been limited. I do know that the ABC does intend to follow through.

Mr McKenna knows the tribulations of First Peoples, having visited many remote communities and having spent years involved in establishing a now famous boxing program on Palm Island – yes, the Palm Island where Mulrunji lost his life in the Palm Island lockup, where justice has never be delivered, and therefore because of this lessons never learned – a theme Australia-wide.

I learned of the death of the young woman on the day, when one of her family phoned me. This was followed by a phone call from a family member of the late Ms Dhu’s boyfriend, Dion Ruffin, who is vital to any inquiry, as he was also locked up for 48 hours with Ms Dhu, and carries imperative testimony as to what may have occurred. The families of the late Ms Dhu are grieving and so too is Mr Ruffin. Mr Ruffin was refused entry to the church service and funeral of his late partner. However despite grievances, whatever they may be, Mr Ruffin is crucial to the chasing down and establishing of the truth.

The Western Australian Greens parliamentarian, Robin Chapple has joined in calls for a public inquiry. Mr Chapple said he is appalled in the circumstances leading up to Ms Dhu’s death. He said the State Government is obliged to “do everything in their power to figure out why this tragedy happened, and why similar tragedies continue to happen across our State.”

“The account given by Ms Dhu’s partner in the days leading up to her death is simply horrifying. The police officers and medical staff involved have a lot to answer.”

“Primarily both of these services exist in the interest of public safety. There is a very serious flaw in the system,” said Mr Chapple.

He said an inquiry was needed “now, more than ever.”

Mr Chapple slammed the detainment of the late Ms Dhu on unpaid fines.

“Incarcerating Aboriginal people, and indeed anyone, for such minor offences, as an unpaid fine, solves absolutely nothing, and generally costs more than the fine itself is worth.”

The president of the Indigenous Social Justice Association, Ray Jackson said the “incompetence” by the health campus at South Hedland that cleared Ms Dhu “twice” into the custody of police should be held to the widest possible accountability.

“We must ask why life-saving recommendations from the Royal Commission into Aboriginal Deaths in Custody have never been implemented.”

“Recommendation 87 calls for any arrest only as a matter of last resort. To lock up someone for unpaid fines is nonsense.”

“Our Federal Aboriginal parliamentarians need to rise to the occasion and pressure for the inquiry.”

“But alas, as we all know, we cannot leave this fight to the politicians.”

“There are so many health, welfare and custodial recommendations from the Royal Commission into Aboriginal Deaths in Custody that if implemented would save lives,” said Mr Jackson.

The death of this young woman should in the least galvanise the renewed calls by many for medical nurses to be stationed at lockups 24/7 and for the implementation of the Custody Notification Service in Western Australia. Ms Dhu was pronounced dead soon after arriving at a health facility after 48 hours in South Hedland police lockup. She had been complaining of being ill right throughout her detainment, had been vomiting and there were visible injuries.

Mr Ruffin said Ms Dhu suffered throughout her ordeal and was complaining of pain, at times on her knees begging for medical assistance. Around midday on Monday, August 4, Ms Dhu was taken in what Mr Ruffin describes as a near catatonic state to Hedland Health campus, where she was soon after pronounced dead. The exact time of her passing is still unclear.

Headland is in the Pilbara, where Roebourne also nests. Three decades ago, 16-year-old John Pat died at the hands of inebriated racist police officers. On that day, Roebourne became to Western Australia what Birmingham had been to Alabama two decades earlier.

An uncle of Ms Dhu, Shaun Harris, said his niece “should not have been incarcerated for unpaid fines.”

“The families are grieving. There is a lot of pain.”

Western Australia has a diabolical record with deaths in custody. Western Australia has the nation’s highest arrest rates of First Peoples. The Government should no longer delay the implementation of the Custody Notification Service. It was a recommendation of the Royal Commission into Aboriginal Deaths in Custody, but only NSW has implemented it. Since its implementation 15 years ago, there has not been a single police lockup death of a First Nations person in NSW.

The Custody Notification Service is a 24/7 phone service to the Aboriginal Legal Services. A lawyer is always on call. In NSW, police are required by law to immediately contact the ALS hosted service and allow for the lawyer to speak to the detainee. The lawyer will instruct police on health and welfare assessments. The service costs only a paltry $500,000 per year in NSW. Had Ms Dhu such an advocate, she more than likely would not have been detained on unpaid fines – she may have been hospitalised and properly assessed. Presumptions that may have been made about Ms Dhu while presenting unwell at the hospital but in the company of police may not have been made had she not been in their company – a stereotypical theme that does pervade perniciously even among the best of people. A stout advocate could have made all the difference.

Many police officers, in particular Western Australian and Northern Territorian police officers, have told me that they would be relieved to see the implementation of the Custody Notification Service.